Sunday saw our first frost of the Autumn but at least it meant we were left with a lovely sunny day.  It was brocante day in the town so the centre and one of the parks were given over to market stalls.  Walking around it we felt as if the whole town had turned out to browse, chat and make the odd purchase.  Our only purchase was a new wrist band for me; a rasta cotton bracelet to replace one that had worn away and disappeared last week.  We ended the afternoon hosting Nikki, Gorete and Ardon for tea, coffee and cake.

Monday was a completely different day weather-wise; it was the first day we could remember since being in France where it seemed to rain all day.  Apart from our walks we spent the day inside and can finally say that we have had a result from Herve.  Herve is the captiniere of the port at Roanne and we have had an ongoing wrangle with him to get our deposit back for our winter mooring there.

You may remember that we were heading to Roanne so we could live on the boat in the port there for a few months over winter.  Other than the large rivers, like the Rhône and the Saône, all other waterways in that area heading to the south of France are closed for winter so we had to get down there by October.  As summer progressed, more canals were closed due to lack of water and it became impossible for us to travel down there.  We cancelled our reservation and, as we did it before the end of August, we were entitled to our money back.

Other boaters, in the same position as us, have had differing degrees of success getting their money back with some receiving it immediately but with a deduction for an admin fee and others waiting several months like us.  It seemed that every exchange ended with a different reason why we couldn’t be reimbursed.  The final straw was a demand, last week, for a physical letter from a UK bank direct to the port detailing our account details including IBAN and BIC codes.  Being as our euro account is purely on-line and therefore does not have paper, we threatened to take the matter further.  This seemed to do the trick and the money suddenly appeared during the morning.

After a visit to Ardon’s boat with the girls for more tea and cake we had an early dinner and set off for Épernay to see Ian Paice and his band.  Épernay is about 35 kilometres away along probably the longest straight stretch of road we have ever been on.  It was still raining which didn’t make for a pleasant journey, but we were pleasantly surprised to be able to park practically outside the venue.  We both thought it strange that the only people around looked like they were off to dance or yoga classes but didn’t say anything to each other.

There were no signs of where to go so we spoke to the receptionist who pointed out that we were a day early.  She also made the remark that we obviously didn’t work!  When we got home, we checked the calendar and, sure enough, we had the event on the right date so we’re not sure how we lost a day.

It was dry on Tuesday, the actual day of the concert, but we didn’t do a lot other than our walks and popping over to Puddleduck for coffee and cake with the girls and Ardon.  Karen did point out that it felt like a Groundhog Day as we would be driving to Épernay again in the evening too.  We didn’t forget about the concert, arrived in plenty of time and had a pleasant evening listening to music mainly from 40 odd years ago in an audience that was predominantly male and nearly all as old or older than me 😊


Wednesday was a day of odd jobs like visiting the déchetterie to dispose of the many containers of used engine oil that has built up in the engine bay over the last few services and taking up valuable space.  And, of course, more tea and cake.

On Thursday we followed another of the Tourist Office recommended walking routes around Châlons.  We have yet to find one that has inspired us enough to repeat it and this 7 ½ mile one ended up being yet another of those.  In future we will stick to the walks in the area that we have found ourselves and definitely won't be trying the remaining one.  The remaining walk is called the ‘Walk of the locks’ which unsurprisingly takes the walker six miles down the dead straight Canal latéral à la Marne, past a couple of locks, crosses a bridge and returns to the town on the other side of the water.

Actually, the first point of interest on today’s walk was quite fascinating, it was the now disused municipal baths on the River Marne.

We found out later that there are plans to redevelop the site next year into a promenading area and leaving just the diving boards as a memory of the place.  As is often the case I was unable to find out when the baths opened or when they closed but I did find a picture of a postcard of divers on the diving board dated 1936.

Next was the pont coupé which is the site of a bridge that was destroyed in the second world war and never rebuilt.  We have passed the site many times on one of our walks on the other side of the river but never taken a picture as everything is so overgrown.  It was no better from this side of the river either, but I’ll include a picture for our memories 😉

The outside of a water pumping station had been painted in an attempt to avoid graffiti and on one side it showed a picture of the bridge that only stood for eleven years: 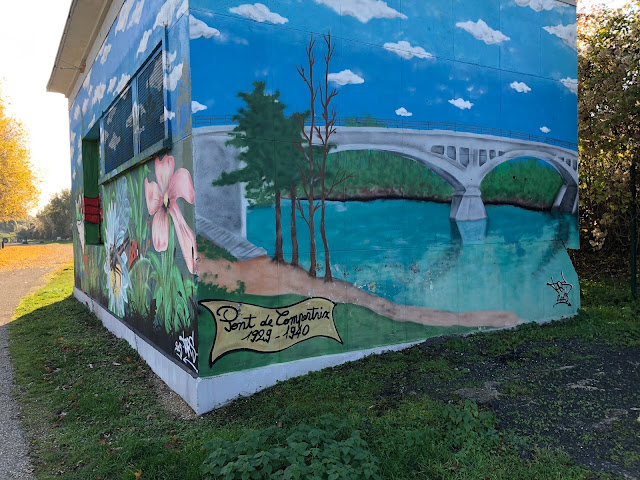 After walking through Compertrix we were soon approaching Coolus and passed a tiny chapel on the side of the road.  Other than saying it was the chapel of St-Gibrien, the walking guide gave no further information and later searches on the web were also fruitless. 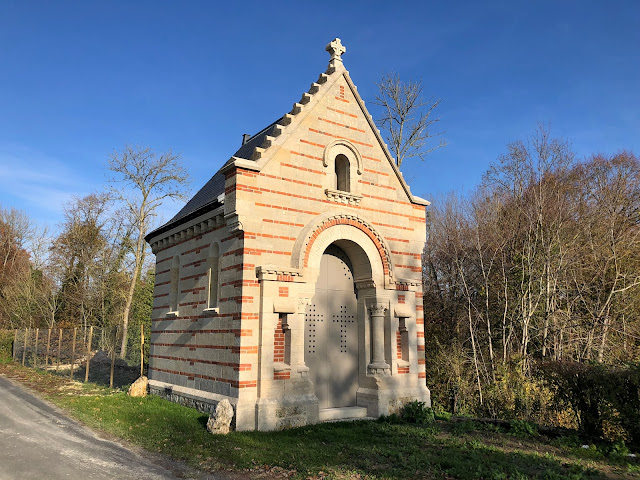 The village of Coolus was where most points of interest were concentrated, and we looked forward to walking around the nature reserve where they were situated.  In order for you to share in our disappointment I have included a picture of the old mill (where visitors can feed the fish!) at the top of this entry.  On a similar vein this is all that remains of the railway line built by the French Vietnamese during the second world war: 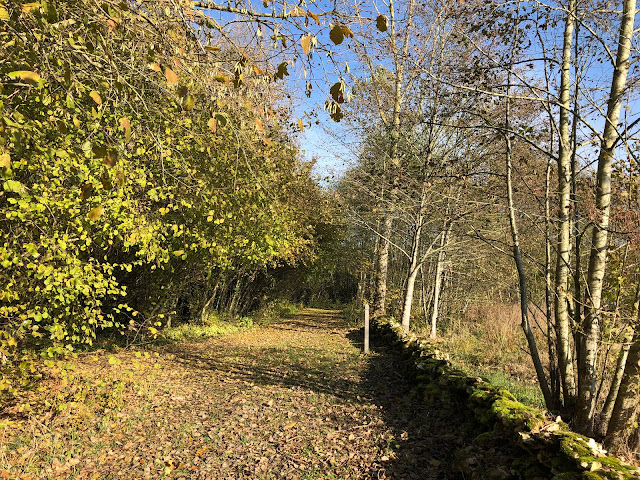 We did come across a sluice that wasn’t mentioned in the guide but was probably used to feed the millstream for the non-existent mill and fish: 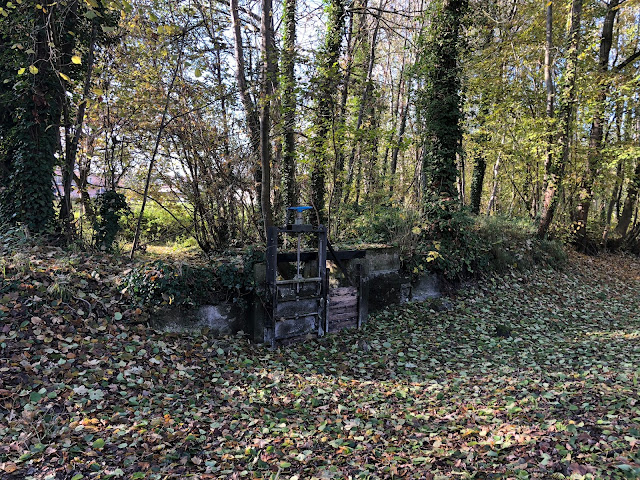 The village church wasn’t mentioned in the guide either: 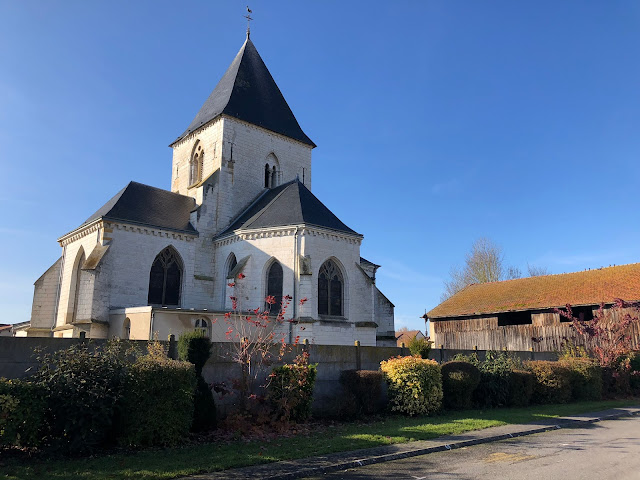 When we were nearly back in town, we passed a barrage on the river that is used to control the flow of water to the many waterways in Châlons-en-Champagne.  We were amazed at the slimness of the metal plates holding the water back.  Mind you, once we thought about it, they were probably the same thickness as the needles used on the needle dams we pass when cruising on the river.

Even though it may sound like a disappointing walk, we thoroughly enjoyed being out in the fresh air as usual.  Neither were our expectations dashed as we have been on all but one of the other trails in the town before so had a good idea of what not to expect.  However, we will be visiting a troglodyte village over the next couple of days where the walks look more promising 😊