When I took Buddy out for his quick pre-breakfast run, the pompiers were already up and getting ready for some diving practice just along from our mooring.  They ended up putting two inflatables in the water and, as other boats are not allowed in that stretch, could perform their exercises without worrying about passing traffic.

After breakfast I set off to get the car and, as I would be gone for about eight hours, it meant Karen would get a bit of peace and quiet for the day.  It was a lovely sunny morning which I found a bit ironic as I was going to be shut away in a train and car all day.

The first train took me to Paris all along the Marne valley and I enjoyed recognising all the places we had passed through, moored at and visited over the last three months or so.  Although I recognised places I wasn’t as good at recalling the names 😉 It kept making me smile that we had left Paris back in July and today I was doing the journey in two hours.  The train made three stops soon after leaving Châlons and was then non-stop to Paris.  Although it was well after commuting time (I left at 10.00am), the train was packed and passengers were standing from the last stop.

Once in Paris I had to take the metro down to the Gare de Lyon to catch a train to Migennes where the car had been stored in the port.  I had to change metro trains at Bastille where the platform overlooks the port at the Arsenal where we stayed in July.  The port was packed with winter moorers and VNF also had some large work boats there, but I couldn’t work out what they were doing.

The train down to Migennes followed the Seine and then the Yonne all the way and, once again, I amused myself by recognising places on the rivers and trying to remember their names.

The journey back by car was more direct and only took a couple of hours.  In effect it made the base of the two sides of a triangle that the train journeys had formed.  I was surprised to see many fields of sunflowers in full bloom because the sunflower season finishes in August.  I then realised that they were much shorter plants and I suppose a new breed of autumn flowering mini sunflowers has been found.

There are two other things to mention about my Monday.  The first was that we have built up a large collection of large yogurt pots as the Champagne areas don’t accept them for recycling.  We knew that a lot of the Burgundy region does accept them, so I took them on the train stacked up in a large bag to dispose of when I arrived in Migennes.  Oh yes, talking about Migennes, the only rain I saw all day was when I walked from the station to the port ☹

The other thing to mention was that I had thought ahead about using the autoroute.  Each time I use one on my own I get into all sorts of difficulty, either dropping the ticket or the bank card or both, all because the toll booth is on the wrong side for us Brits.  The last time was in the summer and on a busy section, so I soon had a queue of impatient drivers behind me as I clambered around the front seats of the car looking for a dropped ticket and debit card.  To make things worse the machine wouldn't accept the card so I had to scrabble around to find some cash. This time, I put my hazard lights on as soon as I stopped in case something went wrong, that way other drivers would avoid my lane.  Of course, it all went smoothly and no other traffic appeared at the booths as I went through.

Before I finish writing up Monday, I’ll mention something Karen noticed when she was out on her morning run.  Two commercials had been moored not far away from us for the last four days and we had been surprised they hadn’t moved for so long.  As Karen ran past them, one had reversed back to a quay and was being loaded with cob corn. 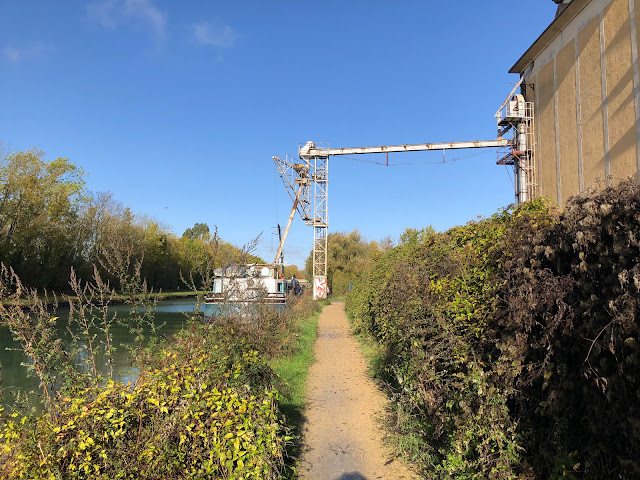 As you may have read in a September blog update, we missed the busiest part of the champagne vendange as we cruised away from Champagne at the wrong time.  Because of this we were doubly determined not to miss seeing the vineyards in their autumn colours.  As we now had the car back, we made sure we went for a drive on Tuesday.


Before we left, we went for our regular circular walk to the west of Châlons and came across a conundrum.  Priscilla, the boat Karen had seen being loaded with cob corn on Monday was still in the same spot.  This time, however, the load was being removed by a mechanical grab.  Neither of our French was up to asking the operators why this was happening so it’s one of those things we’ll never know the answer to.

When we got back, we headed off to Hautvillers which is on the hills above the vineyards of the Ay area.  Although we had been there in the summer it was on one of those really hot days, so we only saw a bit of the place before getting back to the boat and into the river to cool down.  We had heard that we had missed seeing a well preserved lavoir there so wanted to find that.  Apart from being the birth and burial place of Dom Perignon and having many champagne houses, Hautvillers also has over 140 wrought iron signs on the old houses.  These generally depict the trade of the family living in the house.  Having only seen a couple of streets when we were there previously meant we had many more signs to find.

Once we were driving out of Châlons, we could see the vineyards in their various hues of yellow, gold, orange and red.  They really were stunning but, as with landscape views taken on a phone, I cannot do them justice here so have just included the picture at the top.

We passed through many villages and came across ten lavoirs that we hadn’t seen before.  The one at Hautvillers was a particularly fine example complete with two fireplaces, a stand-up stream-fed basin and hardwood hanging rails:

We were at a place called Germaine and parking up so we could have a look at the third lavoir we had found there when a couple of guys wandered over to the car.  They assumed we were lost as they had seen us driving up and down the road.  I explained that we wanted to look at the lavoir and take some pictures.  The guys were council workers and putting up Noël lights around the lavoir and seemed so pleased we were showing an interest.  I explained this was the third we had found in Germain and they said there was a fourth one too.

I explained which ones we had already seen, and they said that we must have driven past the fourth one which had recently been damaged by a lorry.  One of the guys said he would take us to it and jumped in his van for us to follow him. When we arrived, we realised we had passed it already but hadn’t realised it was a lavoir.  This was partly because it was decorated to celebrate the recent theatre festival events and partly because it was so demolished that it wasn’t recognisable as a lavoir.

These are the other nine lavoirs in Avenay-val-D'Or, Fontaine-sur-Ay, Germaine, Hautvillers, Mutigny and St-Imoges (Click on the village name to see more details of the particular lavoir)… 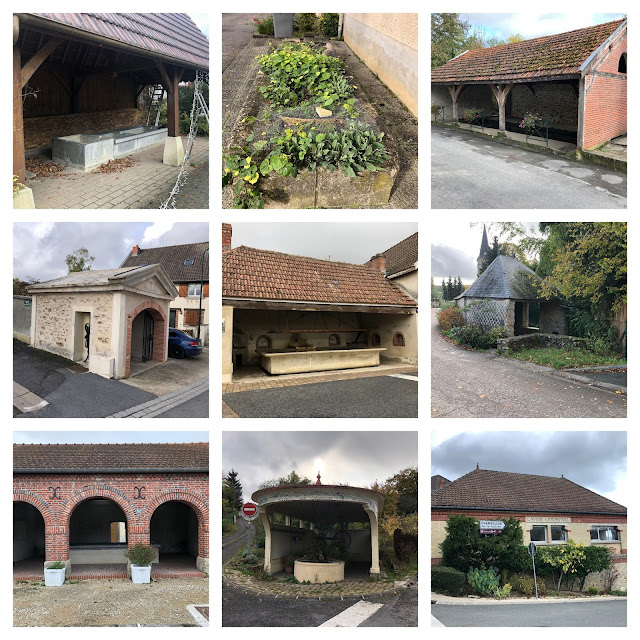 …and some more of the wrought iron signs from Hautvillers 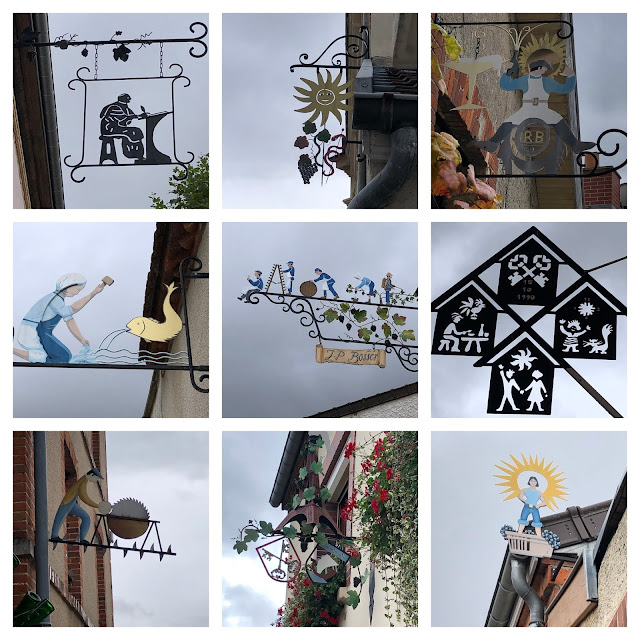 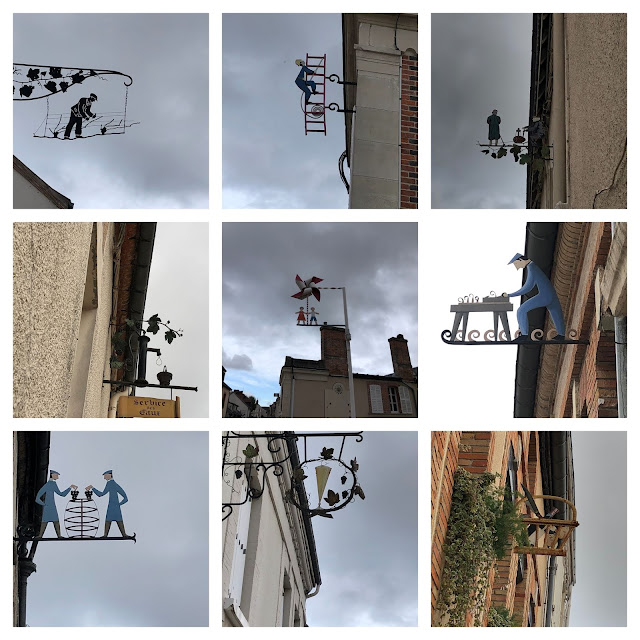 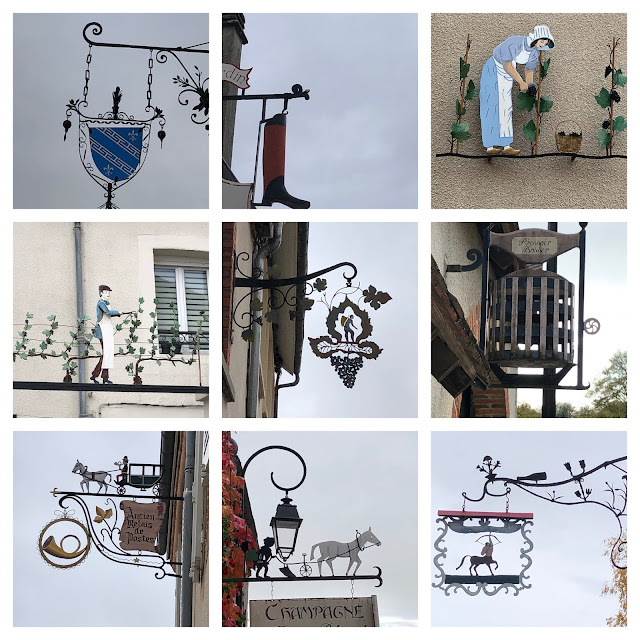 We’ll probably stay at the boat on Wednesday and get on with those boring jobs like servicing the engine.