Port-à-Binson (Come on you reds & whites)

It was very misty on Thursday morning and not only that, it was cold as well.  In fact, there was a chill on the boat, so we popped the heating on for 30 minutes for the first time since last winter.  It didn’t take long before it was feeling warm and cosy, and, looking at the forecast it was only a temporary dip in temperatures (we hope 😉).  We hardly ever use the heating on this boat, preferring to light the stove; it’s not stove weather yet but it probably won’t be long.

It reminded us of our first boat which, when we bought it, had no stove, no insulation and an antiquated central heating system.  The heater was so inefficient it felt like it would take a bottle of gas every few days and, not only that, it didn’t really warm up the boat.  It wasn’t long before we ripped out the boiler and radiators and put in a stove.

For our morning walk we went through the vineyards and up to the village of Vincelles.  Judging by the lack of dereliction and the number of champagne houses it was clearly a wealthy place.  The other thing we noticed was the strong smell of champagne, in common with other places we have visited since the vendanges.  We spotted a stream running along one of the streets and searched for a lavoir.  We couldn’t find one but there were several stone troughs that the stream ran through.

Of course, the village had the usual old grape press on show… 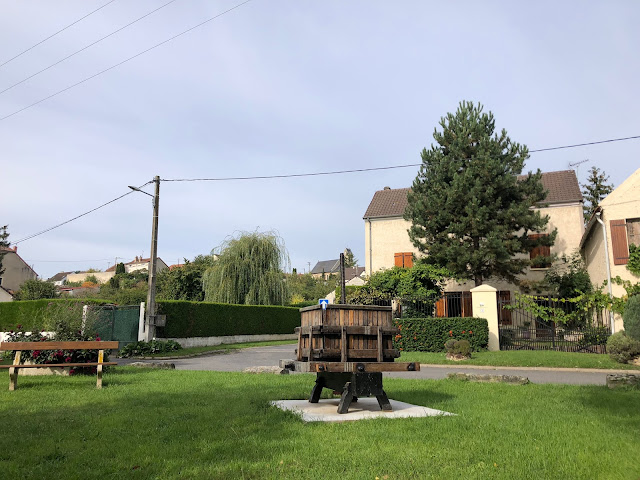 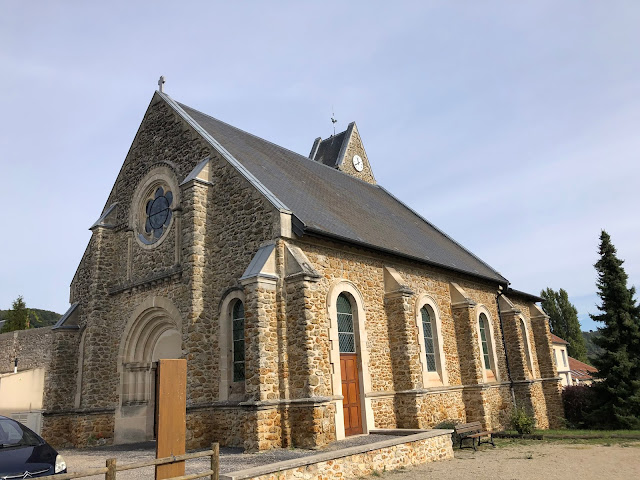 We had nearly finished walking around the village having just decided not to investigate the road leading up the hill when we noticed the name of the road was Rue du Lavoir.  We hadn’t been going up the road because it looked like it just led to half a dozen modern bungalows.  Assuming the lavoir had been demolished for development of the bungalows we half-heartedly walked up the road.  To our surprise, and now looking quite out of place in the modern setting, we found a lavoir.

This one was open to the public and was unusual in that the roof was on a single plane with a hole in the middle to capture rainwater.  Normally, compluvium style roofs slope into the centre on four planes.

The blog page with more information and pictures can be found by clicking here.


When we got back, we set off for an island that we had seen on our way down.  It had a pontoon for mooring and looked ideal for getting on with the next stage of painting.

We arrived at the island mooring and spun the boat around to get the right (correct) side against the pontoon for painting.  The pontoon was on a lock cut, the déviation de Vandières, the main flow being on the other side of the island, so it wasn’t a problem facing the wrong way around.  As soon as we moored, we realised it would be useless for painting the boat, so we had lunch and moved on.

We went up the lock that was closing for maintenance on Sunday and could see plenty of signs of preparatory work including some large metal stanking planks hanging over the edge of the sloping sided lock.  These will be used to form a dam the other side of the lock gates so the water can be drained and the gates removed, to be replaced by new ones which were laying behind the stanking planks. 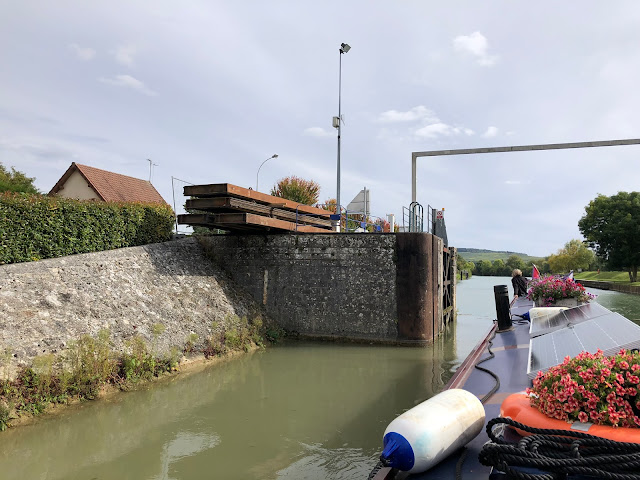 I know it’s not in accordance with our current cruising plan, but we ended up mooring somewhere we had moored previously, Port-à-Binson.  It did give us a chance to have a walk back to the WWI cemetery for French soldiers and investigate the different grave types.  We found plenty of crosses indicating graves of Christians but only one type of headstone.

We had been led to believe that there were three types of headstones indicating those who were Muslims, Jews or free thinkers.  We then realised that that is something the British Commonwealth Wargraves Commission do and of course these were all French soldiers.  Mind you, all the headstones we looked at seemed to be for Senegalese soldiers.

Researching the grave number later we found that the guy was only 24 which rather put life in perspective for us.

As we were ahead of schedule, we had a rethink about the next few weeks cruising and Karen had the bright idea of going back up to Reims and then continuing on to explore new areas by heading for Soissons.  This would also mean new waterways for us: the Canal latéral à l’Aisne and the River Aisne.

Karen followed that up with another bright idea: let’s go and see Reims playing for my birthday treat at the end of October.  We now have tickets for their Ligue 1 game against Nimes on 26th October so we will have to be moored back in Reims by that weekend - hence the title of this entry.  At least it means we probably won’t change our plans again for a few more weeks 😉

On Thursday we cruised 11 kilometres up one lock.

Friday was a boat maintenance day and with a warm and sunny forecast we had no excuse but carry on with touching up the paintwork outside.

On one of our breaks we thought we’d have a look at what the journey is going to be like to Soissons over the next few weeks.  It was then that we realised that we didn’t have the waterway guide for the Picardie area.  I got in touch with a few boaters who we know are around the area to see if we could take pictures of the necessary pages while Karen set about finding where we could source a book at somewhere like Reims.

I was in luck, Nikki said they had a copy we could borrow which was ideal as we will be meeting them this weekend.  Unfortunately, she rang back later, well it wasn’t unfortunate that she rang it was what she had to say.  She had had a look for the book but realised they didn’t have it after all.
Karen struck lucky though and was told of a website we could visit where you can purchase pdfs of individual pages.  So, it was onto the internet to work out the pages we needed, purchase them and then download them ready for printing later.

We had a walk in the afternoon with not a lot to report other than the usual quiet villages and empty vineyards, not even a lavoir today ☹

The water tap by our pontoon hasn’t been working on the three occasions we have been here, but Karen still checks it every time we leave and return to the boat.  She checked it on our return from the walk and, surprisingly, found it working.  This of course gave me an extra job of filling the tank and water containers before we spent the rest of the day relaxing.

We plan on moving further upstream over the weekend to spend some time with the girls on Puddleduck.  They have been pootling backwards and forwards between Damery and Cumières over the last week or so.  They, like us, are waiting for the Canal de l’Aisne à la Marne to reopen after a three-week stoppage for repairs so they can go up to Reims and maybe even beyond like we are.