Damery (centre of the riots)

With Saturday set fair it was up early to carry on with the next phase of the painting of the port side.  Having spent the last few days sanding down the paint chips and then treating the exposed bare metal with an anti-rust solution it was time to get the first coat of primer on.  It may not look attractive to have red spotted paintwork, but this always feels good when it’s done as the metal is no longer exposed to the elements.

With Reuil only three kilometres upstream we set off to have a late lunch there and then continued on to Damery afterwards.  Even though it’s no longer the height of summer, the French still gather at the picnic tables in the villages to have lunch accompanied, of course, by champagne.  It’s lovely seeing tablecloths and the spreads they put on them but we still can’t get used to seeing litter bins full of upturned empty champagne bottles.

The lock before Damery was still not responding to our télécommande so it was over to the radio to call the éclusier to see us through.  He came out of his house immediately but jumped in his van making us wonder if the radio conversation really went as well as we had thought.  He sped off but stopped at the far end of the lock, jumped out, set the controls to close the top gates and then got back into his van.  For the second time, we thought we had misunderstood things, but he reversed back to the bottom gates and set the controls to open the paddles and the gates for us.

Once we were in, he closed the gates and then drove to the far end again to continue the operation.  He was very agile between the controls and his van, so he was either being lazy or in a hurry to get us through as he had a hot date 😉

When we arrived at Damery, Puddleduck was moored on the pontoon with just enough room left for us to fit snugly in front of them.  The girls appeared to be out, so we thought we would settle in to watch the England game on catch up.  The girls came back from a bike ride just as we were going indoors and invited us around for drinks (and to marvel at their walnut haul), which we duly did once the match had finished.

While we were with Nikki & Gorete, another Brit boat turned up and moored on the quay that was only suitable for large boats.  It was Serenity that we had met up with in Château Thierry; a lovely couple called Clare but, not uncommonly, I can’t remember her partner’s name.  We can’t begin to imagine what it must be like having a boat the size of theirs just for two people; we think Puddleduck is enormous for two people 😊

On Sunday morning, Serenity left early, and we had a quick chat as they passed, arranging to meet up at Sillery during the week.

Nikki & Gorete came around during the morning and we had a good laugh over coffee and Karen’s latest cake.  During the afternoon we explored Damery and walked through the vineyards surrounding the village. 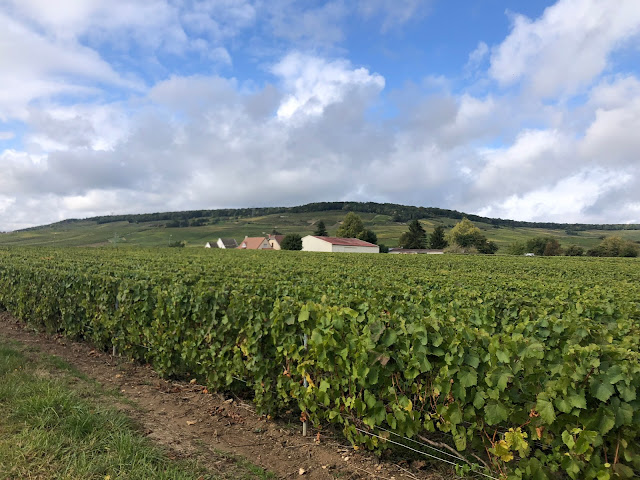 Judging by the large number of grapes left on the vines these vineyards had clearly overproduced compared to some we have seen this year.  I probably mentioned before that there is a strict cap on the amount of champagne that can be produced per hectare, so it does seem an awful waste of the fruit.

In the early years of the 1900s there were several disastrous harvests on the trot.  This led to the more unscrupulous champagne houses importing grapes from places such as the Loire valley which, of course, is completely against the rules.  Such was the feeling against these ‘faux’ champagne producers there were riots in the area during 1910 and 1911.

During these riots, carts carrying grapes being brought into the area were overturned, champagne houses were set alight and bottles and barrels of champagne were taken and poured away.  Damery was one of the villages particularly badly hit and the bridge above our mooring has a plaque commemorating the throwing of 2,000 bottles of the fake champagne into the River Marne below.

We’re still being lucky with the weather, but it does look like we have some wet days ahead this coming week so will be picking and choosing when we move.

Monday we'll be off to Épernay for some shopping and then we'll probably end up mooring at Cumiéres,