We had to move on from Bourg-et-Comin on Saturday as we had no internet, and we needed a good internet signal to watch the rugby.  Rain was forecast so we had the wet weather gear at the ready but ended up not needing it.  Mind you, the skies looked like it was going to pour all day so once again we were lucky.

Just before we left, a cruiser pulled up alongside and it was the Norwegian couple we got chatting with when we stayed at Sillery.  They stayed for a while and we exchanged our latest plans for the winter; they were now heading for Belgium.

Just before we reached Vailly-sur-Aisne we passed a boat graveyard or as it was marked on the map, ‘cimetière à bateaux’.  Only a few hulks could be seen protruding from the water, but we could see several hulls lurking at the bottom.

Later on, I tried to find out more about the sunken boats but being in a part of France that heavily featured in both world wars it meant all my searches ended up at military cemeteries.

We moored up on a quay when we reached Vailly-sur-Aisne.  We thought it was probably used by commercials but there were no signs saying, ‘Réservé aux bateaux de commerce’ so we thought it would be OK.  It wasn’t the prettiest of moorings but at least we had a good internet signal.

The guy on the boat in front of us popped his head out and passed the time of day.  He said nothing about the fact we were moored there so we felt a bit better.  We quickly popped into town and picked up a couple of things and then watched the England game after having lunch on board.

It started raining while we were indoors, so we were glad we had moved and done our chores in the morning.  We heard the sound of a boat coming and when I looked out of the hatch (a common trait amongst boaters) I saw an ideal photo opportunity.  It was an unladen boat of the same design as the one we were moored with and it was perfect for showing the difference in the water draught between a laden and an unladen boat. 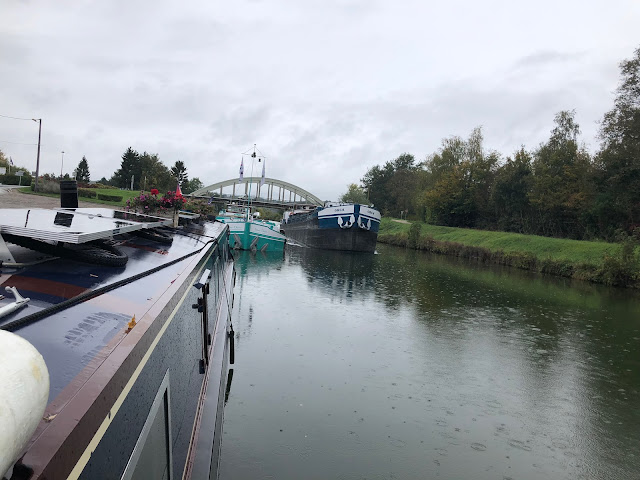 By the time the match had finished, the rain had stopped so we went for a leisurely look around the town.  It was quite a bit larger than we thought it would be when looking at the guidebook and had a thriving high street.  It also had a stream fed lavoir at the far end of town to add to our collection.

We were back on board setting up to watch the Ireland game when we heard a loud voice.  Looking outside we saw a commercial had come up so slowly that he had managed to get alongside us without us knowing.  He was talking to the guy behind us who was calling to get our attention.  Apparently, we were on a commercial mooring after all, and as commercials take precedence we said we would move off.  It was all very amicable, but I did wonder what would have happened if we had refused to move.

As most of the locks on this canal seem to have moorings above the locks, we were happy to move off down to the next lock.  It was only a couple of kilometres away and, as is so often the way lately, it was the best time of the day so made for a pleasant evening cruise.  As expected, the lock landing was free when we arrived and as well as being a lovely rural spot it also had good internet signal.  It did mean that we were able to watch the sad clinical dismissal of Ireland by the Kiwis.


On Saturday we cruised 13 kilometres down three locks.

With rain forecast all day on Sunday we decided to stay put and journey on down to Soissons on Monday.  We had two rugby matches to watch anyway which takes up a fair amount of time 😉

As it turned out it stopped raining by 11 and remained practically dry for the rest of the day.  We went for a walk along the River Aisne and also had a look around Condé-sur-Aisne.  Karen wasn’t sure it was worth walking into the village as on the map it looked like a main road was running through it.  We went anyway and only saw three cars travelling through!

We were glad we took a detour there as we found our second lavoir of the weekend although this was locked away from the public.  It really was in a strange position, almost under the main road. 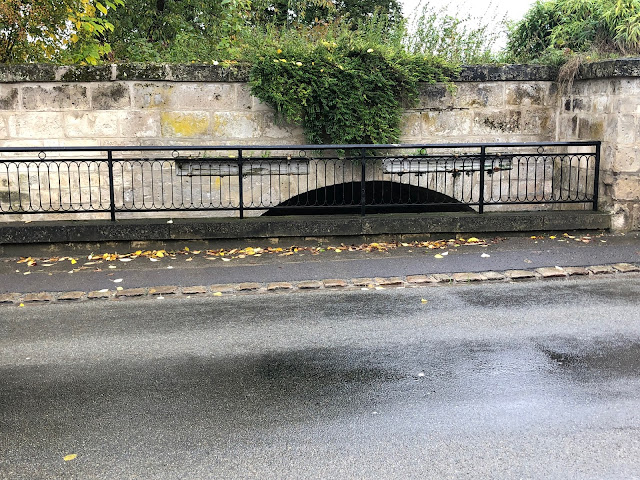 Further pictures of the lavoir can be found by clicking here.


Our current plan is to leave early on Monday morning to join the River Aisne and thence get down to Soissons.  We are moored next to an automatic double staircase lock so it will be interesting to see how we fare as we haven’t been in an automated staircase before.