Châlons-en-Champagne (visitor for the weekend)

With Lauren coming to stay for the weekend we thought we should move up to the port on Friday morning.  Not only would it mean we would have access to water and electricity if required, it would also be much easier to access the boat.  The mooring below the lock was fine but did involve a steep climb up the bank to get into town.  Yes, I know Lauren is only four months pregnant but first time grandparents-to-be are allowed to worry 😉

As we had been moored just below the lock it meant we were between the pole that we turn to start the lock operation and the lock itself.  We had to turn around, go back a few hundred metres, pass the pole then turn around again in order to reach it.  That’s the beauty of these wide commercial canals – they are so wide we can turn around anywhere we like.

When we went into the lock, we were surprised to see we had an éclusiere, our first for ages.  We were rather pleased she was there as the lock wasn't as shallow as some and she took Karen’s line when she hooked it up for her making that part of the ascent much easier..

Once we were up the lock we had to turn left to get into the port which was on the back of an island where through navigation wasn’t allowed.  We had hoped to moor at the far end on the last finger pontoon which had been empty when we looked on each day we have been in the city. 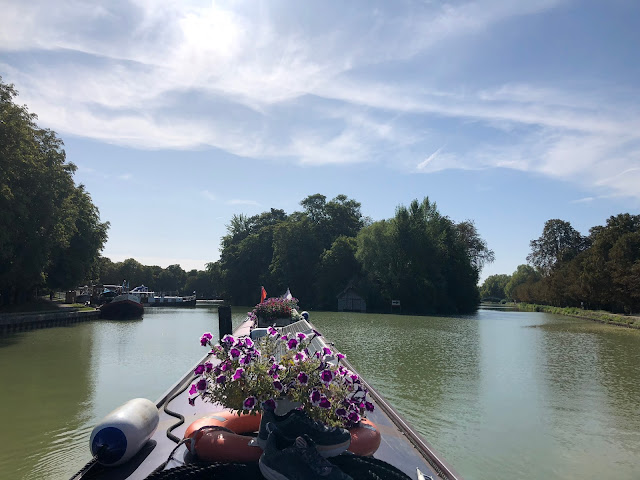 Unfortunately, someone had taken the spot, but there were a couple of other places free and we were soon moored up.  The pontoons weren’t really long enough for us but with no passing traffic on the arm we knew we would be safe.  There were a few Brits and Aussies already moored up and they came onto our pontoon to help us tie up by taking our lines.

We met Lauren at the station after lunch and spent the rest of the day sitting outside catching up.  We had so much to talk about that we didn’t even go for a wander into town or to find a bar!  We made up for it a bit on Saturday by having a couple of walks and also a boat trip.  The weather was much kinder than forecast and, although it was raining when we got up, it stopped soon after breakfast.

Lauren is pretty easy going with her dietary requirements and her only request was that she has fresh croissants every morning.  Being as we are currently living in France that was quite an easy request to fulfil of course.

As I mentioned in the last blog entry there are numerous waterways running through and under the city.  Boat trips are available for the tourists to see the place from a different point of view.  The boats are a little smaller than we are used to and, being electric, were very quiet.

We had to wear earphones to hear the commentary so were pleased that we wouldn’t have the sound of an engine drowning it out.  As it turned out, the comments were very sparse and when they did come through, they were a few hundred metres after we had passed the point of interest.  Still, we recognised many of the places from our heritage trail on Thursday so were able to keep Lauren up to date 😉

As the city centre expanded, some of the waterways were covered over to make way for streets to be laid above them.  This resulted in several tunnels being created and strange videos were played on the tunnel walls as we cruised through.  Well, the first hundred metres weren’t weird as they explained in French about the expansion of the city but for the remaining time we were undergound, the videos became quite hallucinatory 😊

In the evening we went out for a lovely meal and, other than a couple more walks on Sunday took it easy.

Lauren’s train didn’t leave until gone four, so we had a good part of the day together before she had to go.  The only downside of the weekend had been that we received a notice from VNF saying that the Canal entre Champagne et Bourgogne was closing on 15th September.  As this was meant to be our next canal we were due to visit, it’s rather put the mockers on our current cruising plan.

After Lauren left, we had a quick rethink and have decided to get onto the canal and turn around at the point that we know we can get off before it closes.  We will then work out where to go for the rest of the year after that.

On Friday we cruised one kilometre up one lock and didn’t move on Saturday or Sunday.