Château Thierry (and some great news!)

First, the news.  We’re going to be grandparents for the first time!  Lauren & Lewis are expecting their first child in February and it’s an understatement to say we are really excited.  I suppose it's highlighted a drawback of living on a boat and constantly moving in that we have no one to tell face to face 😊

After the grey weather of the weekend, Monday dawned clear and sunny and the fourteen-day forecast says we're back into the 30s as we go into September.  We set off for Château Thierry just before nine which is early for us and had a wonderful morning cruising through the vineyards of the western end of Champagne or the Portes de Champagne as it is known..

The valley floors are predominantly turned over to cereal crops and sweet corn leaving the hillsides for the vines.  As we cruised along, we could see people out trimming the vines and the usual white vans dotted all over the place.  We remembered seeing lots of east European vans last year during the vendanges, trucking the grape pickers from their temporary homes in the municipal campsites.

We had just the one lock to go up and for the first time on the boater-controlled locks on this river, the operating rod didn’t work.  Karen had to end up climbing up the lock ladder before she could finally got it working.  Much easier to do it when stable on dry land rather than leaning over from the roof of the boat 😊

It wasn’t long before we were in the outskirts of Château Thierry which is quite a large town; one of the many that seem to call themselves the centre or the capital of Champagne.  Other than its champagne houses, the town is famous for being the birthplace of Jean de la Fontaine (he of the fable fame of recent blog updates).  It is also particularly well known by Americans as it is where American soldiers first got involved in WWI.  To that end there are a lot of American tourists and also a real ‘American-style’ war memorial.

There are four different sections for mooring so we went past them all first before deciding where to moor.  The furthest which was next to the bridge in the centre itself was taken up by permanent boats.  A little further down were some pontoons, but these were already full of pleasure boats with some double breasting.  We weren’t really bothered by this as there is a charge and as we didn’t need electricity or water, we were happy to go to the free moorings a hundred metres or so farther down.  There was also another section of high-walled quay but that wasn’t suitable for narrowboats and, by the end of the day, was full up with two hotel boats and two large Dutch barges.

We felt our mooring was the best anyway as it was nice and quiet, away from the road and we had no neighbours. Of course, we had lots of people stopping to talk as they walked up and down the riverside.  It was rather sweet as just up from us there were a group of older men that probably gather every day, bringing their fold up chairs and whiling away their time.

After lunch we walked up to the American war memorial by following a few roads and then onto a track through the woods up to the top of the hill. 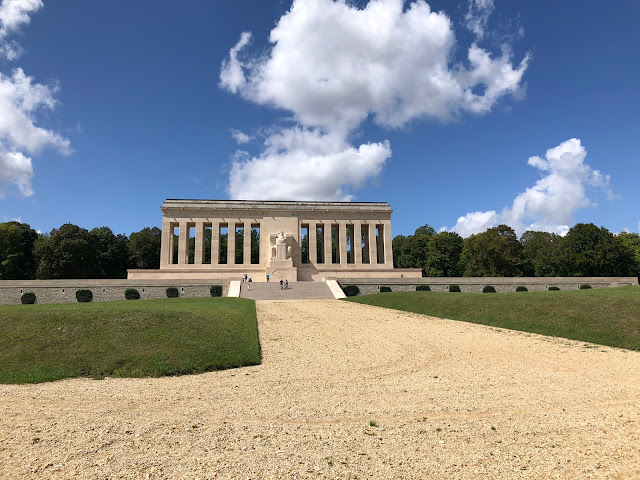 We were surprised to see other people up at the memorial as we saw no one else on our walk.  It was only when we walked around the back that we saw a massive car park!  There were three gendarmes on duty, and we suspect they are sponsored by the Americans as they also had the badge of the US embassy on their uniforms.  One of them, Laetitia, came over and explained that dogs weren’t allowed on the memorial itself which rather surprised us.  As recompense she invited me into the control room where she proceeded to write down details of places we could visit where dogs are allowed!

Karen took Buddy off for a wander while this was going on and it wasn’t long before Morgan joined us to chip in his ideas too.  All the places they were suggesting needed a car to get to and they were even writing down parks in Paris.  It was a struggle, but I finally got away without being rude; they were so friendly and helpful.

We had a short rest when we got back and then went for a scouting walk into town.  We thought we would do a proper look around tomorrow as we needed time to do some shopping and odd jobs first.

Just up from our mooring is a pigeon loft.  We have seen several of these along the Seine and Marne rivers and this one, almost obviously, had a name – Les deux pigeons.

It seemed that everywhere we went we were reminded of Jean de la Fontaine.  The railings on the bridge were adorned with posters, each one depicting one of his fables.

Even the roundabouts didn’t escape the fable theme;

I’ve mentioned the town’s connection with the war a few times I know but by the moorings was a small carved stone.  Further investigation showed that this was one of 118 stones that were erected in the 1920s.  They were erected in memory of a WWI front line from Belgium to the French border with Switzerland, the limit of the German's 1918 offensive.  Originally, there were to be 240 stones on the 650-kilometre line but only half were installed (22 in Belgium and 96 in France).  They all had the same basic design but the helmets on top were either French, Belgian or British.

Later in the afternoon we got the bikes out and cycled out of town to find a bricolage and supermarket.

During Monday we cruised 15 kilometres up one lock.

Our main task for Tuesday was to find a champagne house that would give us a tour and a tasting in English.   I know some people would turn their nose up at that and say we should persevere in French.  We knew very little about champagne and as we both wanted to learn, we felt we would get far more out of it in our native language.  The first house I rang, Champagne Pannier, had a tour at 2.00pm in English and not only that were happy that Buddy came along.

We spent the morning wandering around the town and doing chores like recycling and getting rid of our rubbish.  We found another American war memorial; this one was not big and brash like the one yesterday.  It was in memory of one division who served locally in both wars.

Looking at the dates on the memorial we learnt that the Americans declare the dates of the two wars in terms of when they were involved.

We had to visit three different recycling points in town before we could get rid of our build up and we still had a pile of yogurt pots left over.  We have found very few places that take yogurt pots, it makes us wonder if they are really accepted in the UK’s plastic recycling bins.  Walking up to Carrefour to dispose of our glassware we passed a roundabout with a lion in the middle.

It was only a 20-minute walk to the champagne house, and we set out soon after lunch.  It was set on the site of an old limestone quarry.  Limestone had been dug for many centuries and the two kilometres of caves left behind were ideal for storing the champagne.

We made sure all our questions were answered and learnt what we needed, especially about the differences in production between champagne and other wines.  We also learnt about the production of red champagne that neither of us had come across before.  Apparently, it is best drunk with chocolate or chocolate desserts.  Needless to say, it wasn’t on offer during the tasting at the end of the tour.

Mike & Aileen have told us about a champagne house in Ay which is another 60 kilometres or so upstream.  They tell us it is a small family run house on quite a different scale to the big ones in Epernay or the one we visited today.  It will be interesting to see the difference in production and taste when visit in a couple of weeks.

Back in town we went up to visit the medieval walls dating from the 13th century.  The walls used to surround a château hence the name of the town: Château Thierry.

A section of the gardens on the southern side were set out as a rose garden.  Here there are 48 varieties of rose many of which they said dated back to the 19th century.

Although the roses didn’t look in very good shape, the plant labels certainly supported the fact that some of them may have dated from the 1800s.  To be clear, that’s the variety of rose not the actual bush 😉

We have noticed there are over 30 swans and at least as many mallards on the river in this town.  It makes it feel more like being on a waterway in the UK; I think I have mentioned before that we see very few waterfowl over here.  While having our dinner we noticed the swans and ducks congregating a little way up from the boat.  What must be a local baker was emptying a couple of large bags of baguettes into the water which probably explains the increased numbers of ducks and swans.

Having been in a town for a couple of days we will move on tomorrow and moor out in the country for a while.