While Karen was out for her morning run, Didier (our Mairie de Paris escort from the weekend) stopped by to see if we wanted to go and have a look around the pumping station below us.  Knowing that we wouldn’t be around on any of the four days it was due to open this year, I jumped at the chance.

Poor Karen only had time to change out of her running shoes when she got back, and we all, including Buddy, went straight down for our tour.  Didier is one of those people whose speech speeds up when he gets excited and I was constantly asking him to slow down, especially as he knew no English.  Of course, we were fuelling his excitement by showing a keen interest in everything too.

Water is pumped 12 metres up from the River Marne to the Canal de l’Ourcq at the spot we were moored at.  The waterwheel and associated four hydraulic pumps started operation in 1869 and can lift 27,000 cubic metres of water a day. The wheel is 11 metres in diameter and six metres wide.

Nowadays there are four electric pumps that perform the operation, but the waterwheel and hydraulic pumps are kept in working order and shown off on each of the four open days a year.

We were amazed at the beauty, size and intricacy of the many working models on display.  These must be ideal for school visits and demonstrate things like lock operation, weed cutting and swing bridge operation.  There was also a working model of the Pont de Crimée lifting bridge we went under when we left the centre of Paris.

Didier also took us into the modern control room with its computer displays monitoring the electric pumps and their flow rate.

Pumps BB1, BB2 and B4 were in operation and adding up the figures we could see they were pumping at a combined rate of 24,000 cubic metres per day.

The opposite bank in the picture above is actually an island and we will be travelling along the far side next week.  Navigation is not allowed this side for obvious reasons.

The last thing we were shown was an Ourcq flute; this was the name given to the narrow 28-metre-long barges especially built for this canal.  Their main cargo being timber for heating Parisian houses, and they could carry 80 tons.

As we left Didier, he took us to his car as he wanted to show us the instrument they use to measure the water depth.

Over lunch Karen showed me her butterfly pictures she took when on her cool down walk at the end of her run.  She had managed to capture our first picture of a scarce swallowtail albeit with one tail missing.

After lunch we walked down to the Marne to give Buddy a cool down.  The temperature was in the high twenties and with the forecast indicating we were going back to the 30s over the next couple of weeks then we’re going to have to keep an eye on him. On the way we passed the château that, apparently, Napolean III stayed at when he visited the pumping station.  His uncle, Napolean Bonaparte had ordered the building of the Canal de l’Ourcq in 1802, hence his interest.

We had a bit of a planning session during the afternoon and agreed that we will head back down through Paris onto the Seine and then east along the River Marne into Champagne.  We will then head south back through a new area of Burgundy for us and end up in Roanne in the Loire by the beginning of November.  All this is, of course, dependent on water levels which are decreasing rather than improving at the moment ☹

We also agreed that we will cruise, on average, every other day thus giving us more time for sightseeing.  Saying that, we haven’t seen a lavoir for a few weeks so maybe clothes cleanliness wasn’t so important in the Île de Paris region as it was in Burgundy when we were seeing one most days 😉


Tuesday was moving day and we were off to Claye-Souilly so we could do a food shop for the week and get diesel for the boat.  It was one of those days where there was hazy cloud cover all day making it feel muggy as well as hot, but we didn’t have far to go.

Going through Fresnes-sur-Marne, Karen spotted a post office beside the canal, so we stopped as we had a letter to post.

I stayed and held the boat on a mooring bollard with a centre line whilst Karen posted the letter.  I also did a search for a local Rue de Lavoir and struck lucky: there was an Impasse de Lavoir in the village.

We didn’t really fancy locking the boat up and hence getting it all hot inside, so Buddy and I went off to find the lavoir on our own.

Try as I might I couldn’t find a lavoir or even the remains.  There was a small building by a stream across a field so I assumed it may have been that.  Trouble was that I couldn’t see a way into the field, let alone a right of way across it.  On top of that it was full of sheep and so not the best place to be taking a dog uninvited, so I gave up.

We were soon at Claye-Souilly and moored up in the basin under some tall trees that would give us afternoon and evening shade which in turn makes it more comfortable on the boat at night.

After lunch Karen went off to find the Carrefour which, according to Google maps was a four-minute walk along the canal.  She couldn’t find it and when she asked for directions, she was told it was a couple of kilometres or so out of town.  While she was away I got the trolley out and two empty jerry cans ready for visiting the fuel station.

Soon after Karen returned I popped down as well and also drew a blank.  We found this strange as there was meant to be a fuel station there too.  Looking at the satellite view, Carrefour was clearly marked but in the middle of woods and no buildings.  Maybe they own the land but haven’t built the place yet.

That meant that twice in three days I had got the trolley off the roof and the jerry cans out of the engine bay to no avail.  In the end we went into town for a look around and got a few supplies as we knew we could stop and get a proper food shop and fuel at a Leclerc next to the canal at Villeparisis on our way back into Paris in a couple of days.

Nosing at the estate agents we noticed the house prices were more like UK ones compared to those we had looked at while cruising around Burgundy. We then realised that the town is in easy commuting distance of Paris so that explained the hike in prices.

A stream runs through the middle of the town, so we were hopeful of finding a lavoir but the closest we got were these small streamside gardens:

We found another insectivorium and this one was shaped like a butterfly:

We also had a, not so fresh, red admiral posing for us in front of the insectivorium: 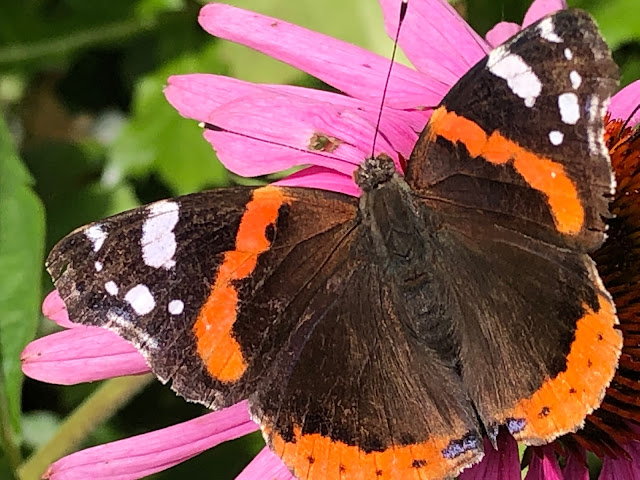 After getting back we stayed on the boat for the rest of the day enjoying the shade, although Karen insisted on popping back into town briefly as she had run out of almonds for a cake she was baking.

On Tuesday we cruised ten kilometres down one lock.