We got on with our paint jobs on Tuesday morning before it got too hot.  One side, above the gunwales, has now had the chips sanded down, the bare metalwork treated and a coat of red oxide. Below the gunwales we have only done the first two jobs.  By the time it was getting too hot we had the first coat of undercoat on the spots above the gunwales and the red oxide treatment below.

When I was talking on the previous blog update about how lovely this mooring at Cry-sur-Armançon was I forgot to mention the foxes.  When we arrived, there was litter all over the bank and we soon realised that a bin bag of rubbish had been split and the contents strewn around.  Assuming it was a fox or similar, Karen had used one of our litter pickers and cleared it all up and double bagged it.  Anyway, when we got up on Tuesday morning another rubbish bag had been split open, so I bagged it all up before we got on with the painting.

Things had all taken longer than we thought, and we decided to ring the éclusière and tell her we wanted to delay our departure for a couple of hours until three o’clock.  While we were having lunch, she turned up on her scooter and asked if we would like to leave at 2.30 instead to avoid being held up by a hotel boat and we said that was fine.

Before lunch we went for a walk into the village of Cry-sur-Armançon as the guidebook had mentioned a wash house.

We were a bit surprised about the write up in the guidebook as all it mentioned was the river and the lavoir.  The village was really rather pretty, and in our opinion definitely worth a mention in the guidebook.

As we were looking down at the river, we saw our first kingfisher for many weeks and we were reminded of how few we have seen over here.

Karen spotted them first, but there were several houses that had stone guttering, some of which looked quite precarious. 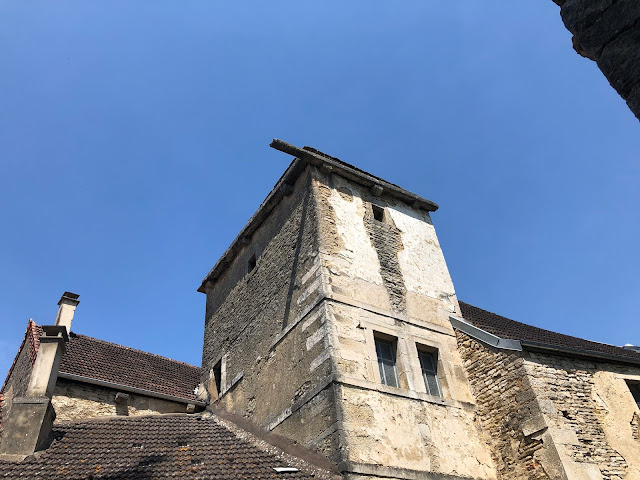 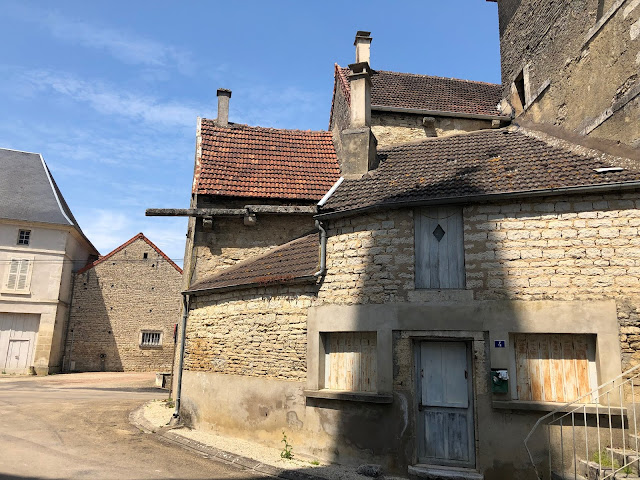 When we walked around the back of the church, we saw a sign for the crypt and, to our surprise, it was open so in we went.  It was amazingly cool so we probably spent longer in there than we normally would.  Apparently, it dated back to the sixth century and there were several artefacts on display such as a stone sarcophagus also dating from the sixth century. 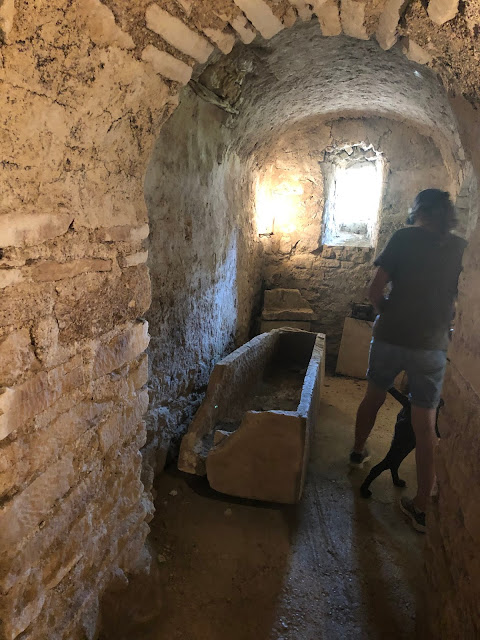 There were also two exhibition cabinets, one with prehistoric items found locally such as Neolithic flint arrowheads.  The other cabinet contained other locally found items, these though were from much earlier times such as fossilised remains.  What we found surprising was that the cabinets and the crypt were completely open, and visiting was clearly allowed on trust. 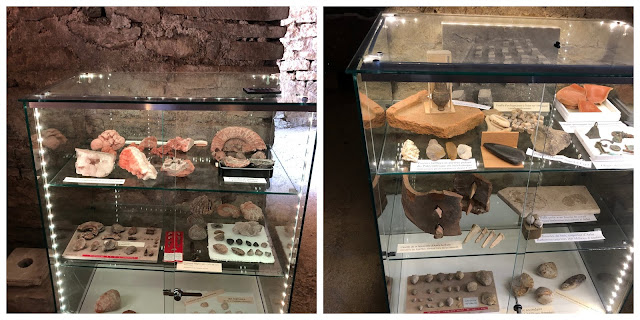 On the way back to the boat we let Buddy have a play in the river.  Unfortunately, a frog or something frightened him at the edge and he leapt, deer-like, in the air and wouldn’t be persuaded to go back in. 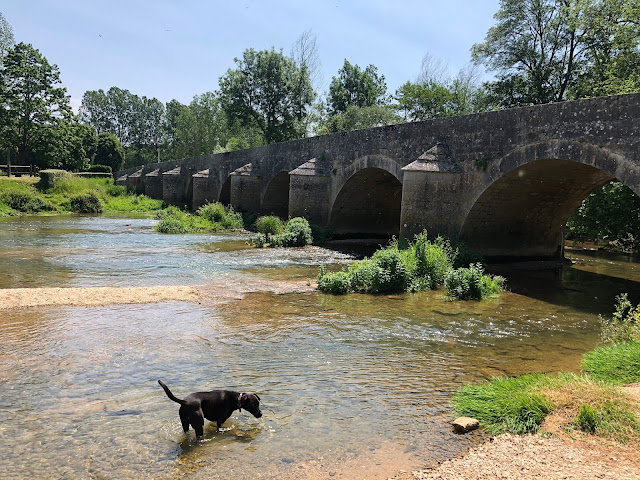 As we had agreed earlier, we met our éclusière at 2.30 and went down a couple of locks with her before mooring up for the rest of the day at Raviéres.

Most of the journey was at the bottom of a partly wooded scree slope and thankfully shaded in many places by tall trees on the other side.

When we approached Raviéres we passed a marble factory and realised that the recent quarries we had seen on the hillsides must have been for marble extraction as well as granite.

We had hoped to moor on a little quay out of town, but it was taken up by a full size péniche, so we headed to the moorings in town.

The far end of the town moorings were owned and reserved by European Waterways, the middle section was reserved for the hotel boat that was following us, so we moored on the first section which was free.  We set the sunshade up and sat out outside for most of the afternoon listening to the cricket.  We find cricket very easy to listen to on the radio; it is one of those sports where the excitement, tensions and frustrations can be visualised without the need to see the action on a screen.

It is also easy to listen to when cruising which we are able to do by using one each of Karen's running bluetooth earphones.

Right next to our mooring was a large block of granite.  The display also included some of the paraphernalia that was used for extracting and shifting blocks of stone.

Later in the afternoon the hotel boat, La Belle Époque, came into view. I walked along chatting with one of the French crew on the front and then took his line and hooped it over a bollard while they sorted themselves out.  We had seen the boat a week or so ago on an earlier trip and had had a short conversation with two of the six crew who were English.  I noticed that one of them was driving so I went up to ask if he needed help mooring up, to which I added, no doubt you’ve done this countless times.  He laughed as an English girl came out and said it was his first time.  He told me it was true and that the usual captain had been in bed all day with sunstroke!

Before dinner we went for a walk around the town and found it a little bit sad.  It was like the whole place needed a lot of love and attention.  There was the odd property that looked well cared for, but many were either empty and in different states of dereliction or in need of freshening up.  As usual though, any locals we passed were friendly and one woman was particularly keen to explain how the book swap worked.  We have seen many different ways of storing books in the book swaps, but this town was the first that used old fridge-freezers!


We did find the town lavoir and it was really incongruous as it was so out of keeping with the rest of the town.  It had clearly had a lot of money spent on it recently as it had been renovated. 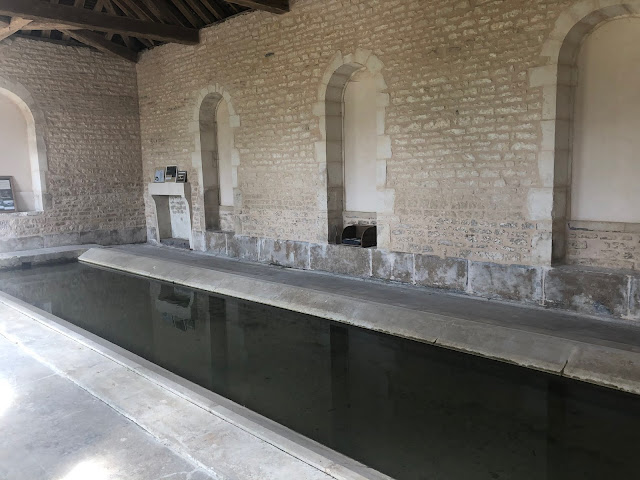 When we returned and had dinner, we were entertained by the jazz band that was playing on the back deck of the hotel boat 😉


Seeing the embarrassing picture of the red spotted boat I was determined to get the first undercoat on before we left on Wednesday.  As it was going to be another hot day, I got on with it while Karen & Buddy went for a run.

By mid-morning all the campervans had left apart from a Belgian guy.  He had been sat at a picnic table assembling and painting a model aircraft.  When he finally packed up, I asked him where he was going next.  He said he didn’t know but needed to find a large open field to fly his plane.

Before we left, we moved down the quay and popped in front of the hotel boat to have lunch and top up with water, and why not – it was free!

As we cruised we noticed the landscape seemed to be changing from rolling hills to open arable fields.  An advantage of neither of us knowing this part of France is that we’re not sure if this is a permanent change or what will come next.

We had to pull into the side at one point as another hotel boat came towards us.  This was ‘C’Est La Vie’ which at around €7,500 per person for six nights was even more upmarket than La Belle Époque.

When we were in the lock at Chassignelles we saw a sign to a lavoir, so we thought we’d have to moor up and have a look.

The éclusier told us that there were a few bollards soon after the lock where we could moor for the night.  Trouble was, the sides were so shallow that we couldn’t get very close, so we tied up temporarily while we went to visit the lavoir.

Back at the boat we decided to continue on and try and find somewhere else to moor.  After a while we found an old quay that still had mooring rings attached.  It was fairly open so we moored up again.

We went for a walk down to Ancy-le-Franc, partly to see how far it would be to the Bi1 supermarket, partly to check that fuel was available and partly to check out the moorings at the port.  As we arrived at the lock at Ancy-le-Franc we noticed some bollards on the other side of the cut.  We crossed the lock and went to check the water depth.  It seemed fine so we decided that when we got back to the boat that we would move yet again.

The port seemed to have plenty of water points, but it had no space for us.  There looked to be four permanent boats, a reserved spot for La Belle Époque (which was following us later in the day) and two hire boats.  We were glad we hadn’t risked going down the last lock as we wouldn’t have been able to moor there.

We walked back along the other side of the cut and a pile of old lock gates caught my eye in a small field.  Looking over the hedge we saw several piles of metal stanking planks too.  Coincidentally, earlier in the day, Karen had asked me if I was collecting all the pictures of lavoirs we have seen.  Her reasoning being that we have seen very few stanking planks over here.  Well, just maybe I will…

When we got back home, we moved just under a kilometre to the mooring spot above lock 80.  As we were tying up, an éclusier stopped on his scooter and asked Karen if were wanting to go down the lock now.  She told him we were mooring for the night but would like to set out again on Thursday at one o’clock.

While we were having dinner, La Belle Époque came past and went down the lock to find their reserved mooring in the port.  Checking my emails later I found one from the port at Paris Arsenal confirming that our request for moorings on the nights of 9th and 10th July were approved.  So, our trip through Paris and some of the Parisian canals is becoming real 😊  Talking with Mike & Aileen later they suggested we try and reserve a mooring in the centre on Bastille day as we will get a great view of the firework display down the Seine.

On Wednesday we cruised seven kilometres down four locks.