Santenay (hotel boats are out)


We fancied cruising on Wednesday whatever the weather and set off in the rain after breakfast.  Paul & Pia were staying put for the day and we had a quick catch up about our respective plans for the next few months before we left.

All the locks on this canal are automatic so we do not have to have an éclusier to see us through.  If you have been following us since being on the Canal du Centre then you will probably realise that every day we have moved we have had an issue in one of the locks and have had to resort to calling an éclusier to come and sort things out.

With 11 locks to go down on Wednesday we weren’t hopeful of a hassle-free journey but, to our surprise every lock was fine, and we didn’t have any of the previous problems like lights not working, lock gates not closing or gates not opening.

When we went down the deep locks when we started our descent from the summit, I mentioned about how seven locks were dispensed with in the 1870s.  This was when the locks on the canal were extended to the Freycinet standard, the minimum size for locks in France then, 38m x 5.05m.  Consequently, some of the newer locks were double the depth of the ones that were removed.  Of course, removing locks meant the numbering system went all kaput, so each lock now has the original information plate showing the original lock number from the 1790s and also a newer plate depicting the number from a century later.

One advantage of having automatic locks is that we don’t have to stop for the éclusier’s lunch break but can just keep on going.  By the time we reached the penultimate lock of the day, the rain stopped but only for about half an hour and it kept on going until about five o’clock when the sun finally came out.  We had a pleasantly warm evening and took in a walk around St-Léger-sur-Dheune.

Looking at the picture above you will see a road running next to the lock.  This canal has been really unusual as there has been a road running along its entire length.  Fortunately, it has been a small unclassified road for most of the way, so we haven’t been bothered by road traffic apart from at Montchanin where a dual carriageway runs for about ½ mile alongside the canal.

On Thursday morning I received several emails from VNF about stoppages on Burgundy canals.  Three were to be closed all day between a couple of locks as the éclusiers there were joining in the French National Strike Day.  Selfishly thinking, we had already travelled through the three areas affected so we were OK.  Another email informed us of a lock having to be closed at Chalon-sur-Saône for a week from next Monday.  Again, we hope to be through Chalon and heading up the Saône by then.

Our cruise on Thursday was gentler than of late as we were only going a few kilometres down to Santenay.  This is a pretty little wine producing town that we have had lots of good reports about, so we had decided to spend an afternoon there.

As we went out the other side of St-Léger-sur-Dheune we passed two hotel boats being prepared for trips. 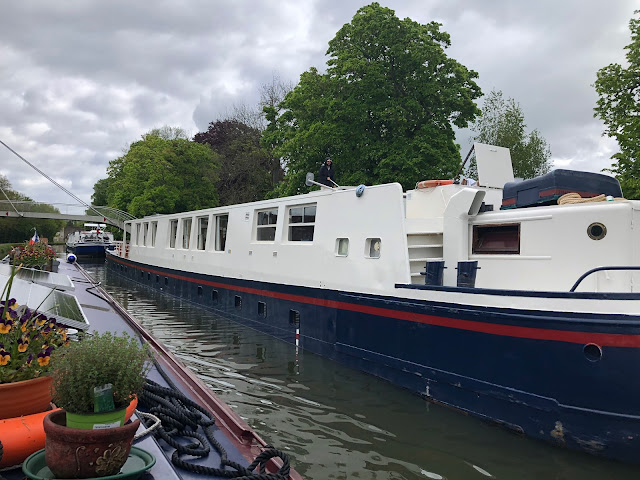 At the second lock we had to wait for a boat to come out and it was yet another hotel boat.

The passengers who spoke to us were all Americans and using words like ‘quaint’ to describe our boat.   All three hotel boats we saw were definitely a lower class than the two we saw on the Nivernais.  On the Nivernais, the boats carried a maximum of four guests in two suites whereas these boats were the same size (38 or 39 metres by 5 metres) but were licensed for 24 guests.  Mind you, I expect they were still well equipped.

Once again, we had no problems with the locks and were soon mooring up at Santenay.

While we were having lunch one of the hotel boats that was being prepared at St-Léger-sur-Dheune came past us full up with guests.  We imagine that we will see a lot more hotel boats now we are back in the wine producing part of Burgundy and also getting onto the Saône.

After lunch we took Buddy for a bike ride into town to find where could get a wine tour and do some wine tasting.  On the way we passed a water point: this was a bit different to our normal points as it had a handle that would have to be continually turned to get water out.  To make matters worse it had a large tap that could really only be used to fill buckets.  There was no way we could link up our hose, so we won’t be stopping for water here.

The town was much busier than those we have been to of late and that’s because of the wine tourists.  After cycling around for a while, we decided to go to the Chateau de Santenay for our wine tour, but we had to take Buddy back to the boat first as he wasn’t allowed in.  We bought the bikes back in Clamecy about a week after arriving and every time we go out on them we congratulate ourselves on deciding to get them.  Our previous bikes were stolen from the back of the boat about a week before we left the UK and we decided to wait and see if we really needed them before replacing them.

We managed to get a guide who was happy to take just the two of us.  She was also happy to speak in English so we would understand more of what we were seeing (and tasting).  The tour of the operation was very interesting.  Although the chateau is over 600 years old it has only been used for wine production for 60 years.

As we were on our bikes, we had to limit ourselves in our purchases, mind you they weren’t cheap so perhaps it was just as well.

Our bikes are resting against the original castle from the 1300s.  The reception area across the middle was added, almost sympathetically, in the 1960s.  The extension on the left was added in the 1500s and the lighter extension to the castle, this side of our bikes, was added in the 1600s.

On our way back home, we heard from the captainerie at Roanne to confirm we are booked in for the winter period which will present quite a lifestyle change for us as we have never lived on a boat without being mobile.  Roanne is about 80km from Lyon and we now have an end point for this year’s cruising in November and will help us plan the next leg of our travels.