Hatton bottom lock (for the last time this year)

As I related on Wednesday’s blog, our washing machine blew up this week and I ordered a replacement that was due to be delivered between 7.00 and 8.00 on Thursday morning.  I was told that the delivery men would ring 30 minutes before arrival to give me a heads up.  Karen left for work at 6.45 (yes, she’s really winding down now) and I was getting my coffee ready when the phone rang.  Rather than being 30 minutes away, they were in Lidl car park looking for me.

They explained that they don’t do the 30 minute pre-call on the first delivery of the day as they worry about waking people up!

By eight o’clock I had had a couple of mugs of coffee, installed the new machine and got a load of washing on so felt quite smug 😊  Not a bad service considering the old machine had blown up left than 24 hours earlier.  I hung the washing outside and, for the first time this year, it dried without having to bring it inside and hang it up by the fire.

We like to use this blog as a diary, so we can look back at things we have done or things that have happened.  Canal breaches are a case in point which is why I’ve been including updates on the breach on the Middlewich branch.  A temporary dam (known as a cofferdam) has been installed on one side of the breach and water will be pumped in so that the stranded boats can be floated and removed.

On one of our trips around Northwich in 2016, our blog included details of a breach that occurred in 1907 due to a salt mine collapse - see Visit to a salt works at last 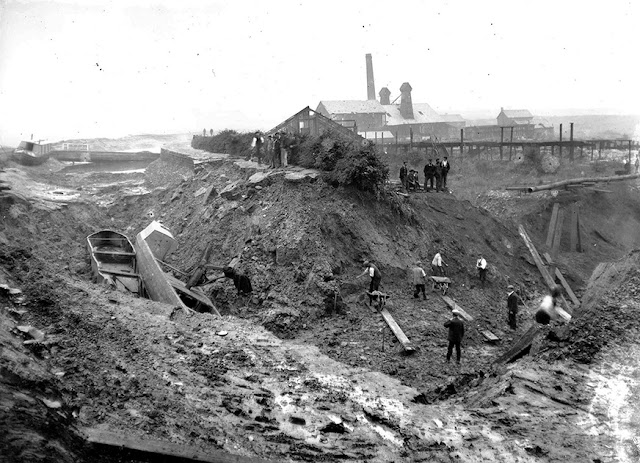 The above is a picture of that collapse that I haven’t seen before, and it shows the scale of the breach.  I have included this information as it took 200 men with barrows and hand tools just two weeks to get the canal operational.  There is currently no estimate for how many months the smaller Middlewich breach will take to repair, and initial estimates say it will cost more than £3million – how Health & Safety and inflation have changed things ☹

We had a busy and productive day on Friday.  Karen worked from the boat for a few hours in the morning and then we went to the dentist – one of the ‘must do’ things on our list to be done before we leave.   We then picked Buddy up and drove to Saltisford to park the car up for the weekend as we wanted to move the boat.  We had a pleasant walk back home and Karen set about making soup and doing some baking and those other things she misses doing as she works – not for much longer though 😊

Meanwhile Buddy and I set off, once again, for Warwick.  My sister is visiting over the weekend and we wanted to be moored at Saltisford as we wanted to go to the Old Post Office pub with them on Saturday.

We stopped just before Cape bottom lock to take on water and have lunch: 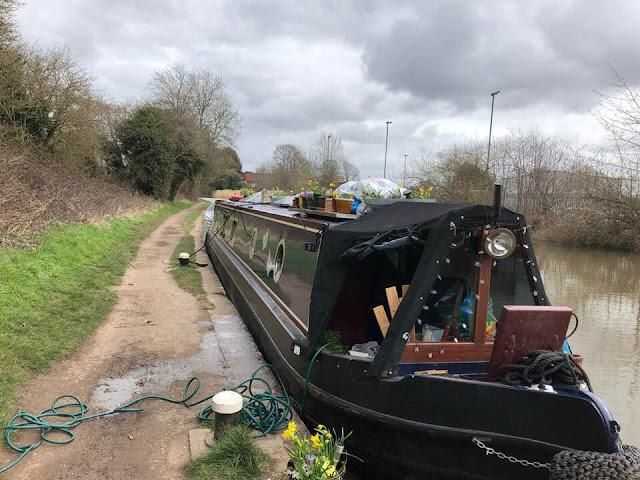 I wasn’t paying attention as we went into the lock and forgot to tell Buddy to stay on the boat.  He was clearly paying attention and leapt off as we entered and ran up to the top of the lock to wait for me.  I don’t normally mind him doing that but stop him at places like Cape as there are so many dog walkers on the towpath and I like to be able to see what he’s doing.

I told him to stay on the boat as we went into the second lock.  Here he is desperate to jump off but, bless him, he didn’t 😉

We stopped at Cape for a while as Karen had to make some work calls and we knew the phone signal disappears where we wanted to moor.  There were seven boats on the visitors' moorings - there had been none when we were last here two weeks ago.

When we reached the Saltisford junction I reversed back down to the bottom lock of the Hatton flight.  It was a bit like coming home as we have been here so many times recently, but this will be the last as, in just over a week, we will be heading towards Stockton, Calcutt and Braunston to get on the North Oxford canal to start our journey back up north.

Karen managed to tick another thing of our ‘must do’ list later in the afternoon and had her haircut in Warwick.

Just two weeks left on the countdown!
Email ThisBlogThis!Share to TwitterShare to FacebookShare to Pinterest