It was still cold on Thursday morning and the cut was frozen for the first time this winter.  It wasn’t enough to stop boats moving of course but it’s always exciting to see the ice and hear the noises it makes as it shifts with temperature change and water movement.

As I said in the last blog, it was time to get Buddy’s coat out and he does seem to be quite appreciative when he has it on.

Buddy and I went for a wander up the lane next to the pub where we are moored.  We haven’t ventured up that way before and were hoping, that as it was a dead end, that there would be a footpath to find.

As luck would have it, the lane stopped and turned into an old trackway.  When the lane was metalled during the last century they obviously decided to end it at the last house rather than continue along the track to the next village.

We were up early on Friday to spend a few days in Yorkshire to see my parents.  We were up there by nine in the morning so had a full first day.  We managed to get a few jobs done and take Mum into hospital to see Dad.

We stayed in a cottage in Embsay just outside Skipton and my youngest daughters, Polly and Lauren, also stayed with us so it was good to get a bit of family time too.

On Saturday morning we walked across the local fell into Skipton for an hour before coming back and going into hospital again.

There is an enthusiastic steam railway society in Embsay and most days they run steam trips.  I must admit that all steam societies seem to be enthusiastic, not just Embsay, and the word enthusiast really sums up steam train fans in my mind.

After popping into hospital again on Sunday we came home to a cold boat but it didn’t take long to get it warm and we stayed in for the evening.

My plan for Monday was to cruise down to the boatyard in Alvechurch to get water and have a pump out followed by a day of washing and admin.

As we left our mooring on Monday morning I could see into the new marina and it looks like they’re not far off flooding it.  The angled entrance can be seen in the foreground with mud forming a dam across it. 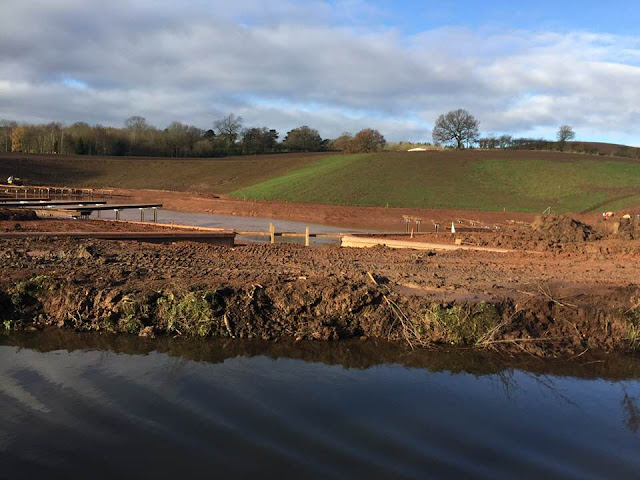 I winded the boat at the yard and, after they had moved a couple of boats, reversed back onto the wharf.  The pump out was fine but there was a problem with the water pressure, so I couldn’t get water.  This was a bit of an issue as we were nearly out of water so there was nothing for it but to cruise back up to Hopwood to the next water point.

At least it meant we were now heading back in the right direction for Leamington.  Karen wants to spend her last few weeks of work around there in February, so she can walk into the office.

As it was Monday I had the car, so I could pick Karen up from work on our way to play bridge at Stratford in the evening.  This meant that once we got to Hopwood I would have to walk back and get the car.

It was a gorgeous day and even quite mild, so it was a pleasant cruise if only for two or three miles.

Not wanting to make the same mistake as we did last time we were moored at Hopwood, I made sure we were next to the road rather than the pub car park (the car had been locked in one night and Karen had had to get a taxi to work!).

We will probably stay here until Thursday as there are strong winds forecast over the next couple of days.  On Thursday I’ll make our way back through Wast Hills tunnel (yet again!) and back onto the Stratford canal.  I hope to get to Shirley where the canal is currently closed.  It is due to open on Friday evening so over the weekend Karen and I can get through and moor either at Hockley Heath or the top of Lapworth.  The flight of locks through Lapworth are also closed and they are due to open at the following weekend.

This morning I was woken by blue flashing lights in the bedroom.  Well, the lights were on an ambulance and fire engine outside but we don’t have curtains at the front of the boat so it felt as if they were inside.  I had thought that it was very quiet outside, we are near a main road running into Birmingham; sadly, there had been an accident and the road was closed.

By the way, my dad was moved to an assessment care home on Monday.  He will spend a few weeks there whilst he is assessed for the level of care he needs going forwards and whether that should be in a home or his own home.