The main thing to do on Sunday was to walk the 7 ½ miles back to Lapworth to pick up the car after our cruise on Saturday.  I’m happy to say that I made it nearly all the way (well, six miles) before having to give up because of my back.  Karen left me laying on a bench whilst she and Buddy continued on to get the car and come back and get me.

I heard a fair few walkers come past but, surprisingly, not one stopped to ask if I was OK.  Was that because I looked like an old man sleeping off a Sunday pint or two or a tramp fast asleep – I’ll never know?

It was a gorgeous morning for a walk and, apart from a couple of ‘dog incidents’ was uneventful.

Both dog incidents started with Buddy and the other dog tearing up and down the towpath and having great fun.  Both times the other dog ended up in the cut as they lost their footing.  Fortunately, both owners explained that it often happens to their dogs so they’re used to it – Buddy would have the shock of his life, he cannot even understand why dogs go in the water in the first place.

About half way back we passed a bridge with a sign on it.  The sign indicates a bakery/deli/café about 100 yards walk from the canal.  Every time we have passed it on the boat we have always said, ‘We must stop next time’. 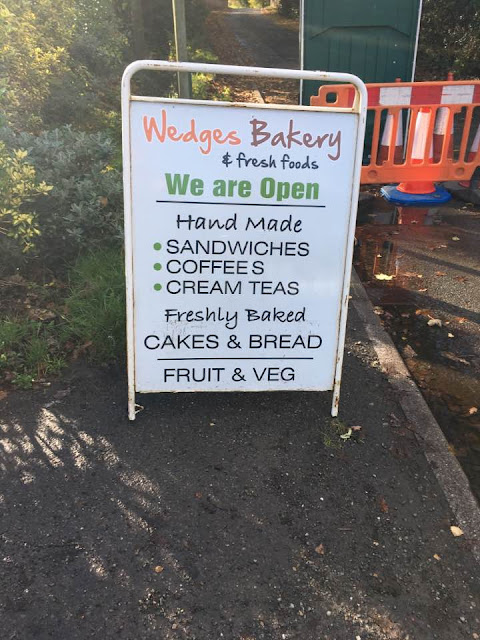 Anyway, we thought we would have a quick look even though we expected it would be closed as it was Sunday.  To our surprise it was packed and the bakers were even baking.  It was quite funny as it smelt exactly the same as the boat did on Saturday when Karen baked a cottage loaf.

After Karen left me on the bench she had to walk down the first few locks on the Lapworth flight and noticed some work boats moored up at the top.  The flight is due to close from Monday and the boats would probably be used for taking old lock gates away etc. 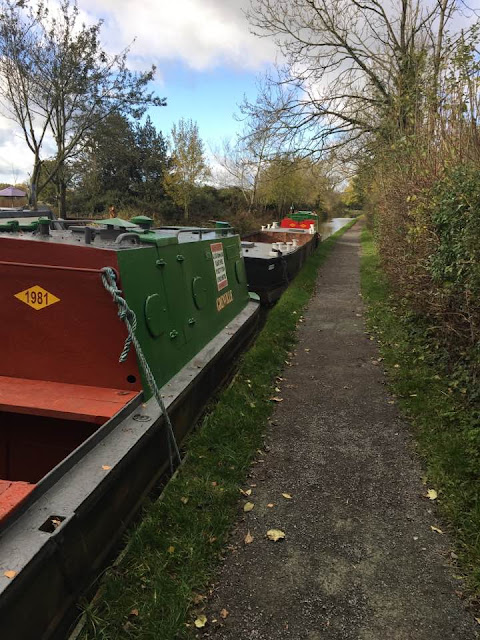 We were having an early dinner at about six on Sunday when I heard pins being knocked in behind us.  We looked out and saw a boat mooring up and thought it a bit odd as we would have expected them to have got through the bridge first as it was going to be closed in the morning.  I went up to see them and it transpired that they weren’t aware of the closure.  They were taking the boat down to London so they could live on the water whilst working.  So many people seem to be doing that these days – but you may remember that when we popped down to see Catherine recently we were pleasantly surprised that it didn’t seem as bad as the doom-mongers were making out.  We saw plenty of places around Vicky Park where we could have moored, albeit breasted up.

I explained to them about the winter closures and how to find out about them.  Thinking about it, it will take them a long time to get down to London as there are many closures in the south this year – it will probably take them until March rather than the two weeks they were hoping ☹

Whilst eating dinner they went past us, so they could get through the bridge then we heard a knock on the door.  It was them again, Karen went out as they were concerned whether their boat would fit under the bridge – she walked down to see and saw that there was plenty of room so reassured them it was OK.

Sunday was our coldest night of the autumn so far and it was quite frosty when I took Karen into the office first thing on Monday.  I needed the car for the day as there were errands to run and I had an appointment at the chiropractor during the afternoon.

By eight o’clock the road across the bridge had been closed and work had started replacing the control system and doing something about raising the controls so the operator could see the road and barriers better.  Karen thought that the view was fine when she uses it and would rather money be spent on something else 😉 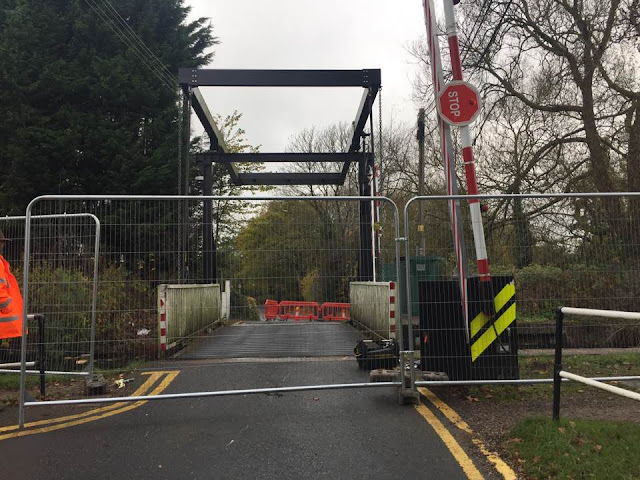 During the morning three boats came past and each one wasn’t aware of the closure.  Fortunately, the controls were still operational so the workers let the boats through.  As the locks were closed a bit further on, the boats had to find a place to turn and come back through the bridge again.  One of the boats pulled up next to my open hatch to have a chat.  I asked them where they were going and they had just started a week’s holiday doing a circular trip around SE Birmingham.  They were completely unaware that closures would disrupt their plans so they were on their way back to the marina again!

On Sunday evening Karen had been looking at a website for Leamington locals and saw a plastic boat had been stolen.  I recognised it as one we had seen on our walk back to get the car.  We got in touch and told the owner about it and said I would go and see if it was still there when I took Karen to work at six in the morning.  I did check, but it had gone already; fortunately, it was found a few bridges further on but, unfortunately, had been trashed by the culprits.

What a lovely bright morning Monday was but it remained cold with frost hanging around in the shady areas.  Buddy and I had a walk along the canal and then cut off across what is reputed to be the largest Christmas tree farm in Europe.  Some of the trees were well over 60’ tall and I’d never really thought about it before but the large trees in towns and stately homes have to come from somewhere.

During the day, Dave and Barbara popped in for a cuppa on their way back to their boat after spending a weekend away in Stratford.  As usual we had a good catch up (without any alcohol for a change 😊) and found that our cruising plans for 2018 were quite similar.  Hopefully we will have the odd cruise together around Liverpool and across to Leeds.  It’s great how cousins (Karen and Dave) ended up living on boats with neither of them knowing that the other had the interest or was even doing it.

I’ve got to sign off now as the washing machine has finished and I need to get the clothes dried somehow – rain is forecast all day so I’m not sure why I put the washing on – it’ll mean I’ll have to light the stove during the day.
Email ThisBlogThis!Share to TwitterShare to FacebookShare to Pinterest