It was off to Lauren and Lewis’s on Friday for a weekend of family fun.  Seven of our children made it so Lauren had a houseful to contend with.  I suppose we will always call them children although they are all over 21 now.  Those of you who are boaters will understand when I say that one of the best things about staying away is not having to worry about having long, hot showers 😊

On Saturday afternoon, we all went off to the Escape rooms.  We split into two groups to make it more competitive.  If you’ve never been to an Escape room the idea is to solve clues and find your way out within 60 minutes.  Both groups did it with just minutes to spare and it was practically a draw.

As Jake managed to hide behind a placard in the FAM picture at the top I thought I would show you a nice picture of him and his fiancée, Dommie, from her graduation earlier in the week: 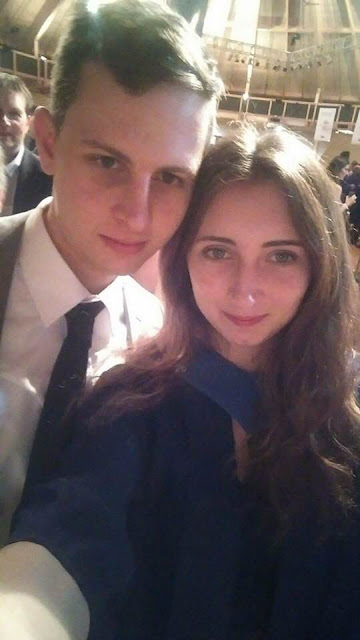 You may remember that last week I included a picture of an unusual boat on the canal at Hockley Heath.  I also posted the picture on a social media group called Weird Waterways as they love that sort of thing.  It attracted quite a bit of interest with lots of wacky comments as expected.  It turned out that the guy moored on the narrowboat next to them saw the post and was able to explain the craft.  These were his words, “They have a explorer licence and it's owned by some young lads from a church group that have built several this one is the mk7 model. Really nice bunch of lads. They removed it from the water yesterday apparently the posh locals had been complaining about it.”

My first thought was that just because there’s a McLaren and a Rolls Royce garage at Hockley Heath it doesn’t make the residents posh.  Shame on them if the story’s true.

Another advantage of visiting family in a house is that you can order things online beforehand and have them delivered there.  Karen had ordered a sandwich toaster that sits on top of the stove so we were keen to try it out when we got home on Sunday.  Excuse the over-roaring fire but the boat had got cold over three days and we wanted to get it warmed up quickly.

Monday was bridge night, so I took Karen into work in the morning and picked her up in the evening on our way to Stratford.  We only have four more Mondays before our Christmas holiday – all of a sudden, it’s nearly next year!

On our way home we noticed that the satnav couldn’t work out where we were and had got completely confused.  It seemed to think we were travelling from somewhere north of Birmingham. This is going to make it fun for Karen when she comes home from work today.  Today is moving day and when I move the boat during the week I just send her a postcode of where we have moved to; that’s not going to work today unfortunately ☹
We need to take on water and visit a boatyard as we are running out of coal.  The plan is to cruise the remaining four miles of the North Stratford canal to Kings Norton junction where I will turn left onto the Worcester & Birmingham canal, through the 1 ½ mile long Wast Hill tunnel and out into Hopwood.  Hopwood is only half a mile from a junction on the M42 so shouldn’t present any problems for Karen finding us in the dark (hopefully 😊).

We will stay at Hopwood until Friday when we will cruise into the centre of Birmingham for the weekend – our first visit there on the boat since October 2015.