On Monday morning, Buddy and I walked down the canal to Alvechurch.  On the way there is a junction with what is called the Crown Meadow Arm.  This arm was in fact the original route of the canal, but a new channel was dug when the M42 was built.  The arm now ends at the motorway embankment and boats are not allowed into as it has been designated as a nature reserve.

A cheeky kingfisher was patrolling up and down but kept moving off whenever I got close to it.  I couldn’t even get close enough to tell its gender – the lower beak colour gives it away.  As it was I spent a happy 16 minutes following it around but I’m not sure what Buddy thought about walking backwards and forwards all that time.

Just before the arm are some residential moorings on the offside overlooking a reservoir.  We have always thought this is a lovely place to moor until we remember that all that can be heard is the constant traffic on the motorway.

At one end of the reservoir sits an isolated cottage without any vehicular access, just like many lock cottages.  We love the idea of living somewhere like that but this particular cottage has no land whatsoever.

I said last week that I would try and find out some more about the history of the 1 ½ mile long Wast Hills canal tunnel which is just up from where we are moored this week.  I had included a picture of the middle ventilation shaft and noted that a small brick building had been erected next to the shaft. 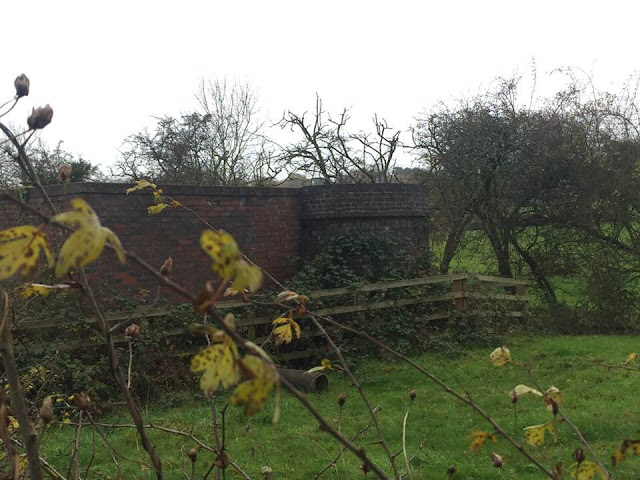 Even though the building is now used by the farmer I have found out that it used to house a steam engine. The steam engine was used to drive an extractor fan in the shaft.

A sad but interesting fact was reported in Waterways World magazine in January 1980.  It referred to an incident that occurred on 23rd November 1979 when two workmen were killed in the tunnel.  They were repairing brickwork where seeping water had washed away mortar thus making the brickwork loose and unsafe.  The tunnel wasn’t drained as they used a boat for access and to bring in material and take out waste material.  Apparently scaffolding was erected on the canal bed for the men to work from and one day they uncovered a construction shaft whose existence they were unaware of.  Construction shafts were only loosely filled and covered up after the tunnel was opened so they had inadvertently opened it up only to bring the filling tumbling onto the scaffolding and knocking it over.  They were trapped in the water by the scaffolding and consequently drowned.

British Waterways received a heavy fine for breaches of health and safety and procedures for working in tunnels were reviewed and consequently tightened up.  Sadly too, they thought the men would have survived if the tunnel had been drained first.

Primrose Hill Comprehensive school sits above the tunnel and apparently the pupils and staff were evacuated for fear of the breach causing further collapses.

I also found the following post on a canal discussion forum that I have lifted verbatim because of the sensitivity of the issue:

In February 1964 I was a pupil at nearby Kings Norton grammar school. Two boys I knew, Rob Seymore and Clive Chance, attempted to canoe through the tunnel, and were drowned. I often think with sadness of this event.

This was posted as a response:

It was the February half term. In those days we didn't get a week, just the Friday and Monday. Rob and Clive left their homes early on the Friday to make the canoe trip through the tunnel. Unfortunately, they didn't tell anyone their plans. When they didn't come home that night the police were called and a search started, but they had no idea where they had gone. There was no news all Saturday, Sunday and Monday. On the Monday night a family returned home from a few days away and learned of their disappearance for the first time. Their son was also a pupil at our school and said that he had happened to see them on the Friday carrying a canoe down to the canal. A search was carried out and they were found. I drive over that bridge at the bottom of Parsons Hill, Kings Norton and always think about them and what they might have achieved had they lived.

Hopefully future blog entries will be made with happier stories ☹
Email ThisBlogThis!Share to TwitterShare to FacebookShare to Pinterest