After an early lunch on Sunday we set off for Radford Semele; I was driving whilst Karen and Buddy walked ahead to set the locks as usual.  When I got to the first lock, Fosse bottom lock, Karen put a large piece of furniture on the roof. 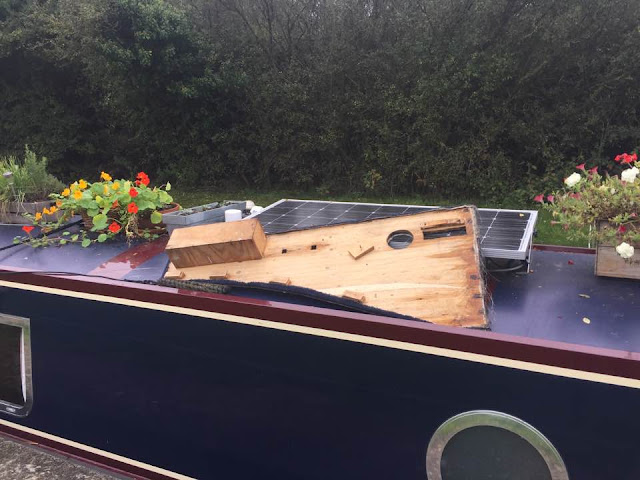 She had found it dumped beside the lock. 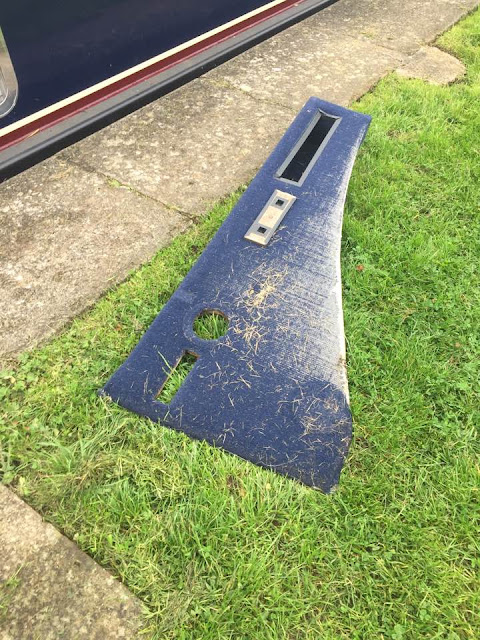 It looks like it comes from the front deck of a boat and as we were so far from a road we couldn’t think of any other source.  It’s always upsetting seeing litter on the towpath but things dumped like this that are obviously from a lazy boater don’t help at all – it just compounds the view that some people have that boaters are messy, dirty and don’t care about society.

Karen put it on the roof so we could get rid of it at the next rubbish disposal point.  Whilst talking about rubbish, another pet hate of mine is when rubbish that has clearly been removed from propellers is just dumped beside the canal.  Not only is it littering but it encourages the less savoury to kick it back into the cut to end up getting caught in another unsuspecting boater’s prop.  Anything taken off the prop should be put on the roof until a convenient disposal point is reached. Rant over!

There was a fishing competition going on along the route.  It was a lure or jig fishing competition.  This is where the fishermen walk along the canal rather than just sit at one allocated peg.  For some reason we always find these type of fishermen more friendly; it must be something to do with the nature of the type of fishing.  Walking whilst fishing must be more fun (not that I like fishing ☹) as you get to talk to fellow competitors and see more sights.  Sitting alone all day on a peg probably suits the loner and less communicative type of person.

The guy with the mouse lure showed us how he drags it across the water and it really did look like a small rodent swimming along.

After going through Radford lock we moored up and went to see Blair and Liz who have a permanent mooring just below the lock.  They have chickens roaming free on the mooring so we had to keep Buddy tied up.  Although we had chickens when we lived in a house, we moved aboard soon after Buddy arrived so he never had time to get used to them.  He would probably be alright with the hens but I doubt he could ignore the three chicks that looked just like balls of fluff – stupidly I didn’t get a picture of them as they were so sweet.

We had a good old chat and a cuppa with Blair and Liz and then set off again to moor further down towards Radford Semele.

It’s quite a good place to moor as it is out in the open so catches lots of the sun and is only a couple of miles from Karen’s office.  It does get very busy though and there were twelve boats moored along the stretch by nightfall.  Karen’s convinced she could cycle to work but it worries me as the last ½ mile is along a busy road without a cycleway – it’s fine along the towpath obviously.  It would also worry me that she would get held up and end up cycling home in the dark.

My mum is still in hospital so I will go up to Yorkshire again this week to spend some time with Mum and Dad.  Hopefully she will be out soon though.
Email ThisBlogThis!Share to TwitterShare to FacebookShare to Pinterest