Lapworth (ignoring the naysayers and congratulations are in order)


There was really a rather good weather forecast for Monday in these parts; light cloud in the morning with full sun and 20 degrees centigrade from midday.  So, an ideal day to get some washing done, it would also be ideal to use the slow cooker with all that sun available to shine on our solar panels.

My first problem arose when the first wash was half way through.  I had just come in from outside and the machine just stopped with one of the red lights flashing.  I assumed I had accidentally knocked a button when I walked past it and so reset it and started it off again.

Buddy and I went for our morning walk whilst this second attempt went through its cycle.  When we got back the same thing was happening so I knew something was up.  Looking at the manual I found that the flashing light gives a code, the code being the number of flashes in each phase of flashes.  The code translated to a possible blocked filter.  This didn’t seem out of the question as I haven’t cleaned the filter since we moved the machine to the new boat.  The flap that covers the filter has been restricted by the steps down to the galley and hence doesn’t open.

There was nothing for it but to get my hands dirty and remove the steps.  Before I started I had a quick look at the recipe that I was going to cook later.  Just as well I did as it needed at least seven hours in the slow cooker.  For some reason I had four hours in my mind and thought I had loads of time.  So, I got on with preparing the evening meal even though it was only midday (the sky was still like the picture at the top and still no sign of it changing).

Whilst getting some ingredients out of the fridge I noticed cream dripping into the salad box.  On investigating further, I realised that somehow a nearly full pot of cream had been knocked over and was everywhere.  I quickly shut the fridge door and thought I would tackle it later; cleaning out the fridge was on my job list this week anyway.

So, I got the slow cooker out, prepared the dish and transferred everything to it.  I thought I would have to run the engine occasionally as there was still no sun but that didn’t matter as I still had all the washing to do and that needs the engine running anyway.

Back to the steps: I unscrewed goodness knows how many screws and finally remove the steps.  Of course, I had to empty them all first as they were full of our spices, beer, wine and food store stuff like cans of tomatoes.  But once the steps were out I got the filter cover off and opened the filter without thinking.  The next thing there was water everywhere – I had forgotten to drain the machine.  I quickly screwed the filter back in and set the machine on the drain cycle whilst I prepared my lunch and Karen’s lunchbox for Tuesday.

In the end I got the filter clean and set the machine going again.  I took Buddy for another walk and when we got back the machine had got further in its cycle than before so I knew everything was OK.  When it finished I hung the washing outside and set another load going then went off for a bike ride along the canal with Buddy.  I noticed the wind had got up and within half an hour the sky had cleared and we had beautiful blue skies.

By four thirty Buddy had had enough and stopped at a lock as if to say, ‘I think we should turn around and go home for dinner’. 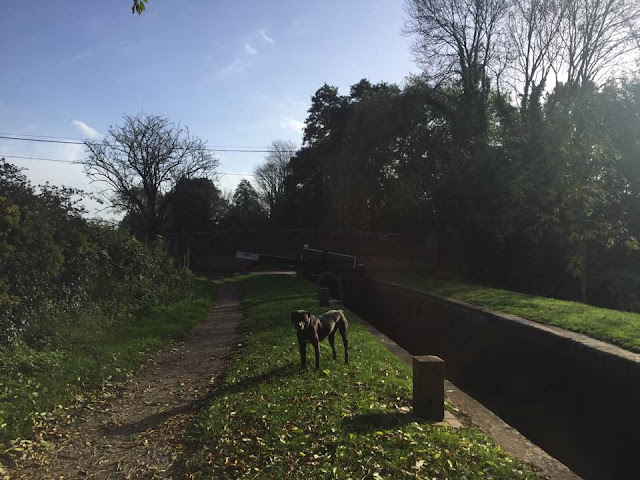 When we got home the wind was really up so I put extra pegs on the washing for fear of any of it blowing off.  I put the steps back together, this time ensuring there would be easy access to the filter in future.

Considering how windy it had been when out on the bike ride I still saw a lot of butterflies, mainly Red Admirals but I also saw Speckled Woods, a couple of Peacocks and one Small White – not bad for the second half of October but I suppose it was really warm.

Oh, in case the fastidious were wondering, I did clean the fridge 😊
And the congratulations?  My sister became a grandparent for the second time yesterday (Karen and I are still waiting).  Also, my youngest son, Jake, got engaged to Dommie - the announcement was so them – no one knew until their Facebook status changed!
Email ThisBlogThis!Share to TwitterShare to FacebookShare to Pinterest