I was working around the engine bay on Friday morning when it suddenly occurred to me that no boats had yet passed us since we’ve been on the Stratford canal.  It made me realise that when Buddy and I cruised here from Hatton last week that we only saw one other boat on the move that day.  I suspect it will pick up in the last week of October when it’s half term and then die right down again for the following four months or so.

When I say I was working in the engine bay, I was doing my fortnightly chore of cleaning all the drain channels on the rear deck and in the bay itself.  They can get clogged up with dirt and leaves especially in wet, muddy, weather and if they’re not kept clear then the bilge fills up with water.  I know it gets pumped out automatically but it means the bottom of the engine bay isn’t dry when I’m servicing the engine or doing the routine checks.

Whilst I was down there I realised we didn’t have enough oil for the next engine and gearbox oil change so I rang the boatyard at Hockley Heath and, luckily, they had some in.  So, on Saturday morning we got the bikes out and Karen and I cycled up the Lapworth flight to Hockley Heath to get the oil.

This was the first time we had used the bikes since putting my back out so we took it easy and didn’t cycle any more on Saturday.  Just after setting off Karen noticed an issue with her chainset.  It transpired that the outer two cogs were bent so she could only use the inner one.  We realised what had happened; when we last put the bikes away on the rear carrier we had put her bike the wrong way round and the chainset and Derailleur gears were facing outwards.  Karen remembered a boat mooring next to us at Marston Doles with high bows and no front fender.  She also remembers the boat pushing on the bikes so that would have been the reason.  Anyway, we’ve ordered a new set and that’s another job for the job list.

When we had the boat built we had a simple towing hitch welded to the rear and so can use an ordinary car bike rack for the bikes.

On Friday, Buddy and I had a couple of walks re-familiarising ourselves with the area.  In the morning we walked around Lowsonford and some of the fields there, then over to the Grand Union canal back to Lapworth thus making a good varied circular walk,

We had a look at one of the old brick built sheds and I had rather hoped we would bump into the retired farmer who still walks around these parts.  He has a lot of local knowledge and loves imparting it.  I used to see him most days when we were here for a few weeks in March but, sadly, I haven’t seen him yet – I hope all is OK.  He would be able to explain the reason these buildings were originally erected.

Inside it just had a few bales of hay so it’s probably now used for storing the hay for feeding the sheep in the winter months.  Mind you, it may have been built for that purpose.

A bit further on we came across a couple of old hay rakes stored in a railway arch built as a farmer’s accommodation arch.  These rakes were designed to be tractor drawn rather than horse drawn so are probably only about 80 years old at the most: 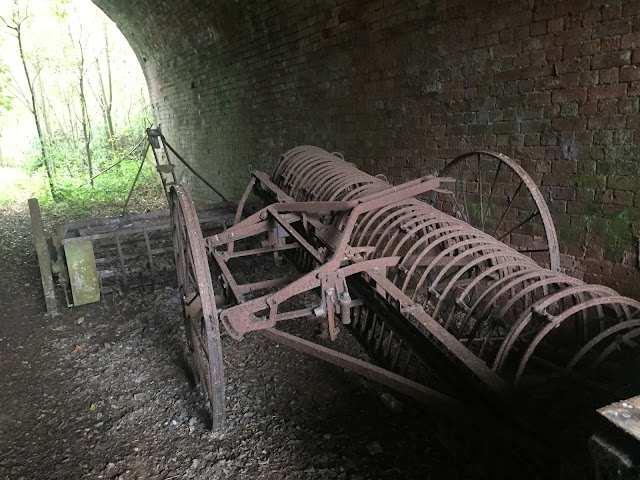 One of them was built by an East Anglian company – Lister Blackstone: 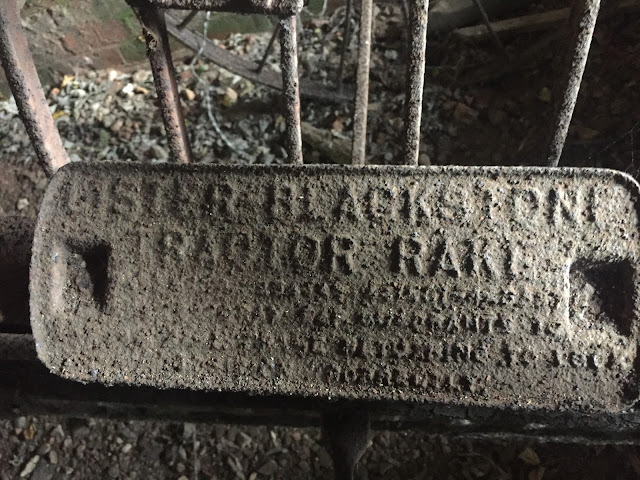 One of the fields we cross often seems to have friendly cows in it and as soon as they see us climbing over the stile they come towards us.  Buddy isn’t keen on cows so I get him across as quickly as possible.  Fortunately, it’s only a short path across one corner so we normally get through the field before they get too close. 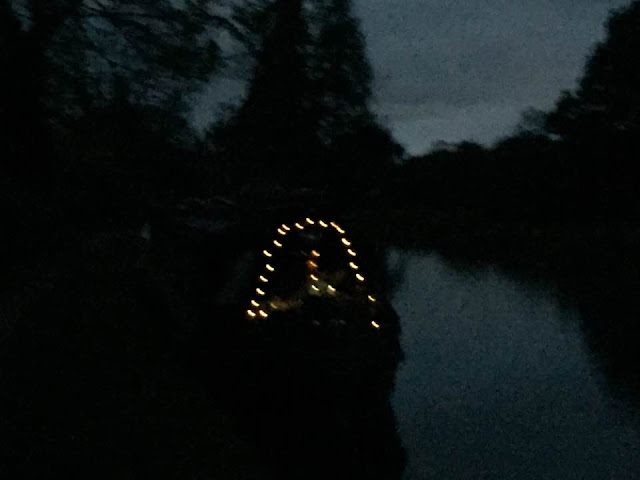 We’ll probably have a little cruise this morning up one lock to the services in the basin and then reverse back down hoping that no one takes our spot.