Hatton station (German bombs and where have the buzzards gone?)


Since moving to Hatton station we haven’t seen a single buzzard.  We normally see and hear them from this spot but there seem to be none around.

All became clear on Monday morning when I saw a post on the Nature Followers Group for Boaters.  Our friend, Mharie, had posted about seeing eight playing together over Warwick.  Someone had replied that they were probably young buzzards that have left home but are not ready to pair up yet so are just having fun playing.  It’s a lovely thought that teenage birds exhibit this sort of behaviour but I wish they would come up this way – it’s only a couple of miles.

I have had a few emails from CRT recently about changes to the dates on some of the winter stoppages.  As we have had to plan quite a cumbersome cruising pattern over the winter I spent some time on Monday morning checking the dates of all the closures that impact us.  There were a couple of minor changes but basically our plan still holds:

As Karen will only have ten weeks or so before she gives up work after Christmas and we will be heading straight up to Chester, we will have to plan where to cruise for those first few weeks of the year.  It’ll probably be in the general Lapworth area as the Hatton flight back down to Warwick is closed until the end of January.

On Tuesday morning I checked the electrolyte levels in the batteries – I’m paranoid that we keep these new ones in good condition after the disaster with the previous set.  We haven’t let the voltage drop below 12.5 (and generally not that low) and they are kept charged to the right level too.  I also tightened one of the alternator belts whilst I was in the engine bay – it has a habit of starting to slip every couple of months, making an annoying squeak when the engine starts.

After lunch Buddy and I took the train to Leamington as we had a package to pick up.

Buddy hadn’t been keeping his food down for a couple of days but after a couple more days of very short rations he seems back to normal now.  He was behaving like he normally does on trains - ever on the lookout for dropped food on the floor and expecting every passenger to make a fuss of him.

Walking up The Parade, we passed the town hall with a statue of Queen Victoria outside. 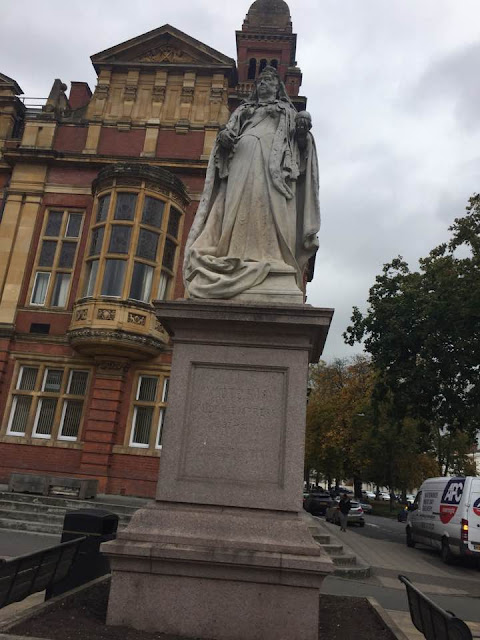 I hadn’t noticed this plaque on the side before: 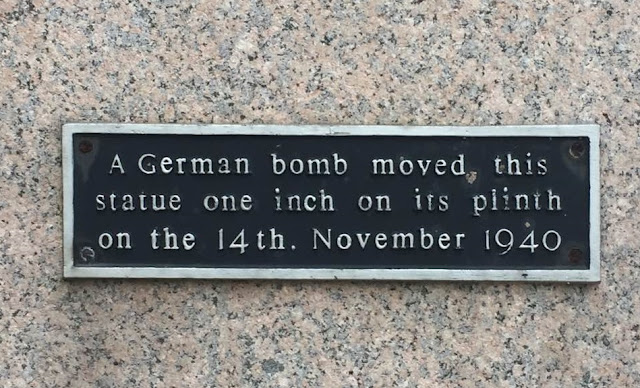 If you look closely you will see that the statue has moved to the right: 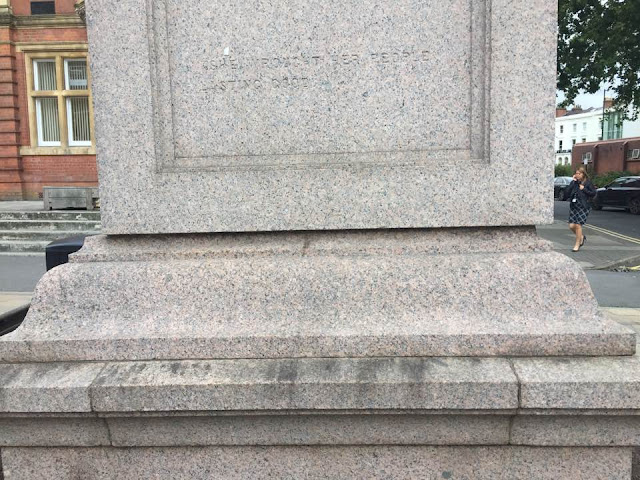 We are moored on the outside of a slight bend and when Karen comes home from work in the evening I can see her walking along the towpath. Well, not actually Karen but her torch bobbing up and down.  On Tuesday evening I saw the torch light coming so got ready to greet her but she didn’t appear.  I went outside and she was at the front of the boat taking pictures of the solar powered butterfly lights that she put up at the weekend!  Unfortunately, none of the pictures have come out very well so you will have to use your imagination.

Strong winds are forecast today and heavy rain this afternoon so we’ll go out for a good walk this morning.