Most days this week at least one walk a day has been back along the canal towards Fenny Compton and so we have passed what is probably the most photographed narrowboat in the world.  We often see it on social media and we have included it in our blog a couple of times.  The reason I am mentioning it again is because I have just realised that although it is going nowhere and no other boat can get near it, it still has its fenders down!

On Saturday morning, we drove the car down to Napton and parked it by the Folly.  We popped into the village shop for our Saturday paper and had a pleasant walk back to the boat in time for lunch.

Later in the afternoon, we set out down the Napton flight, a cruise of about two miles.  We planned to stop in the pound just before the bottom lock so we only had eight locks to descend and Karen soon got back in the swing of narrow locks. 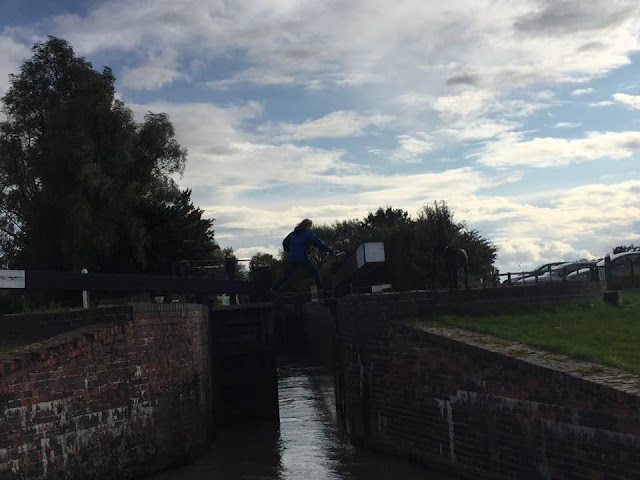 These will be the last narrow locks we shall do for a couple of months as we will shortly be joining the wide-locked Grand Union canal on our way to Birmingham.  The last leg into Birmingham will be back on the narrow-locked Stratford and Birmingham & Worcester canals but that won’t be until November.

It felt like it was going to be a chilly evening so before we set off we set a small fire going – our first of the winter although we have seen quite a few boats with their stoves going already.  We love the sight and smell of stoves going in the winter when we’re cruising, there is something cosy and homely about it.

Getting closer to Napton we could make out the windmill and church at the top of the hill.  The skies were darkening and the white sails of the windmill were standing out on the horizon.

We passed Wayne and Jay who were moored in one of the pounds and they lent out for a quick chat whilst we were waiting for a lock.

We managed to get moored up before it started raining too heavily and were lucky and got the last spot on the pound – there are only room for three boats here.  We were at the end, so ideal for running the engine without annoying any neighbours.

The engine needs to be run more than usual now the battery bank needs replacing.  We have now got new batteries, Karen having picked them up in Leamington on Friday.  Our neighbours, Rob and Lesley, at Marston Doles had kindly lent us their wheelbarrow to transport them from the car to the boat as our heavy-duty trolley has a puncture.  Rob and Lesley are in their first year of living on their boat and are loving it.  They both work in Banbury so tend to cruise the Oxford canal.  They told us that when they bought the boat from an old guy, who was giving up boating, he was crying.  Apparently, he had lived for 30 years on the boat.

I'm not attempting to replace the batteries myself because of my back but Steve is coming up on Thursday so we'll do it together then.

It poured for most of the evening and we were glad we had a fire to keep us cosy.

Before I finish I have a couple of bits of news about the Aylesbury and Wendover arms of the Grand Union.  Firstly, my sister Judith, and Nigel were walking along the arm on Saturday and came across this boat with a floating garden towed behind it. 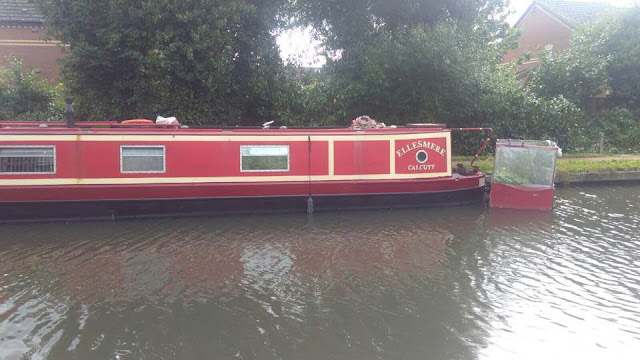 Secondly, Catherine, Karen's eldest daughter is running a 10k on Sunday along the Aylesbury arm.  There is also a half marathon that involves running along the Wendover arm too - the fun runs are rather touchingly called, 'Two legs on two arms' 😁