In terms of education or self-education I have been very lazy throughout my life.  If something didn’t take my interest then I couldn’t be bothered to learn about it.  I was lucky during my working life in that I was able to do jobs that I enjoyed and on the few occasions where something didn’t interest me I learnt to change my attitude for the short period required.

Anyway, this is leading up to me and electricity which is one of the things that I have never been interested in and therefore never tried to understand.  Our set up on the boat is pretty standard.  We have a starter battery with its own alternator and four domestic or leisure batteries powered by a separate alternator; this keeps the two systems apart.  We have three solar panels that help keep the domestic batteries topped up and some fancy management system display panels that enable us to check on the state of the batteries and solars including what is going in and what is being drawn from them.  Someone explained what checks I should make to ascertain when to run the engine to top up the batteries and things have been fine for the last year until the last few days.  Every morning the power levels have fallen right off such that we cannot put the inverter on for 240 volt power so I knew something was drastically wrong.

Before we went for our first walk on Thursday I posted on one of the narrowboat forums.  I explained our electrical setup, the monitoring we have been doing and this recent behaviour.  This was the first time I have posed a question on this forum so I was interested to see what the response would be like.

Soon after setting off, Buddy made friends with a Shetland pony albeit behind bars.  It’s a shame but the pictures of when they were literally rubbing noses never came out.

When I posted on the forum I ticked a box to say I wanted alerts whenever someone made an entry.  I was really surprised when I checked my phone after walking for about a mile and there were already a couple of dozen responses!

My main aim on that particular walk was to get close to a dilapidated building I had seen in the distance a few days ago.  As mentioned before, I am interested in finding out the purpose of the brick buildings that are often seen in the fields in Warwickshire.  When we got to this one I realised it had a chimney so maybe it was built as a shepherd’s hut or similar. 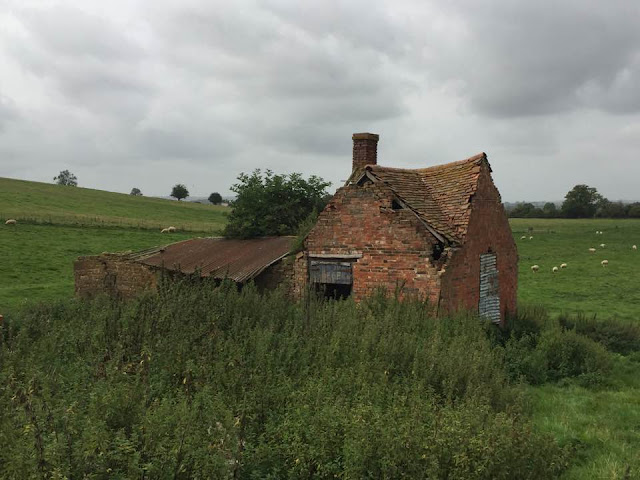 The building also had a stone built annex but the roof had completely collapsed – so what came first, the brick or the stone structure?

When we got back I logged onto the forum to read the responses.  The first ten or so were really helpful and it did seem I had got the wrong advice and that the batteries were now knackered.  The later responses were starting get far too technical and I suspect many of these threads end up like that as people want to show off or share their detailed expertise.

Anyway, after a lot more research I confirmed how we should be monitoring and charging the batteries so the next task is to buy new ones.  Of course, that’s yet another minefield with all the different types and brands but I’ll worry about that over the next day or so.

In the afternoon, I had a long conversation with Mike who is in France on his narrowboat, Quaintrelle, for a few years (this is a link to their blog on their French travels).  Although he is more technically clued up than I am he certainly understood how I got into the situation as he had had similar, but not quite the same, issues a few months after buying their boat.  Sadly, we realised that a well known and respected site for people living off grid didn’t have the correct values with respect to power management and that is why you shouldn’t always believe everything you read even if from the best sources.

I have now resolved to understand boat electrics and maintenance in more detail going forwards to avoid another expensive mistake!