The willow tree overhanging the water at one end of our current mooring makes it very difficult for passing boaters to navigate.  The foliage hangs down so far that they cannot see where they are going as they pass the tree.

An upside to this has been that boats tend to go very slowly past us.  Even so, we have been hit several times by boats who don’t want to give way or slow down.  It’s a bit sad really but the three people who have hit us didn’t automatically call out, “Sorry”.  One guy did after I challenged him, another ignored me and the third said it wasn’t his fault as it was someone else going too fast!  I know the boats are steel and no real damage is done other than some scraped paintwork but I really feel people should automatically call out that they are sorry.

As the tree is on Mike and Lesley’s property we decided to take advantage of having the boat moored there and cut some of the foliage down.   We left it until Monday afternoon as that is the quieter time boat-wise and we needed to get the boat into mid-channel thus blocking any other boats coming along.  Fortunately, we only had to reverse the boat out of the way once for a passing boat and got the job done in peace although we had a lot of interested spectators on the towpath.

Mike controlled the boat from the towpath with a couple of lines and a barge pole whilst I stood on the roof and used short croppers and Lesley used long loppers standing on the rear deck. 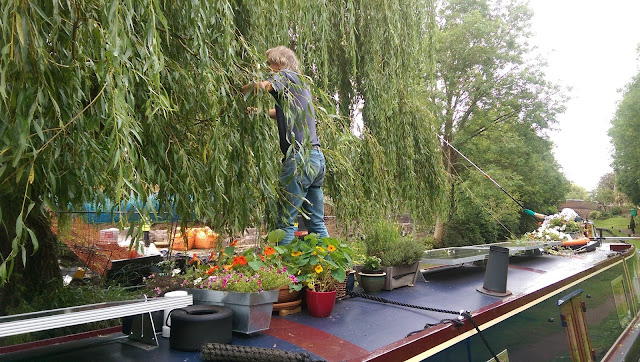 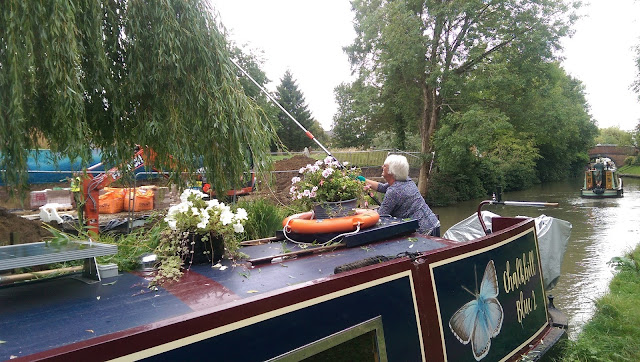 It actually made a big difference but the pictures don’t really show it.

Of course, Karen’s immediate reaction when getting home from work and seeing the pictures was, “My poor plants!”.  But we had been really careful and no damage had been done.

The first boat that came past hardly slowed down but called out that at last someone had cut the foliage.  I felt like responding, “That doesn’t mean you can go faster”.  I was wrong – nearly every boat that came through was going far too fast considering they were going past moored boats.  So that’s what I mean about the double-edged sword.

Re-reading this it sounds like I’m becoming a grumpy old man.  I can assure you I’m not, it’s just that it seems more people are in a hurry these days and I find it sad that they and their crews are probably missing the tranquillity of travelling slowly and instead are getting stressed about reaching their next destination.

By the way, if you read Mike’s blog as well as this one, let me assure you we are not having blog wars!  We are just sharing some experiences and pictures whilst we are moored at Cropredy 😊