On Wednesday morning Mike ran me to Banbury station so I could catch a train to Birmingham airport; I was off to Hamburg to visit Sophie who is living out there to finish her PhD.  I’d forgotten it was a bank holiday weekend coming up and, at first, couldn’t understand why there were so many youngsters with camping gear waiting for the Reading train on the opposite platform.  I then realised it was Reading festival weekend and mused to myself (no pun intended even though Muse were headlining)  how young and clean they all looked and how different they would look in a few days’ time.

Apart from being delayed an hour it was an uneventful trip to Hamburg and, after dropping my bags at Sophie’s apartment, we went off to the nachtmarkt for a drink or two. 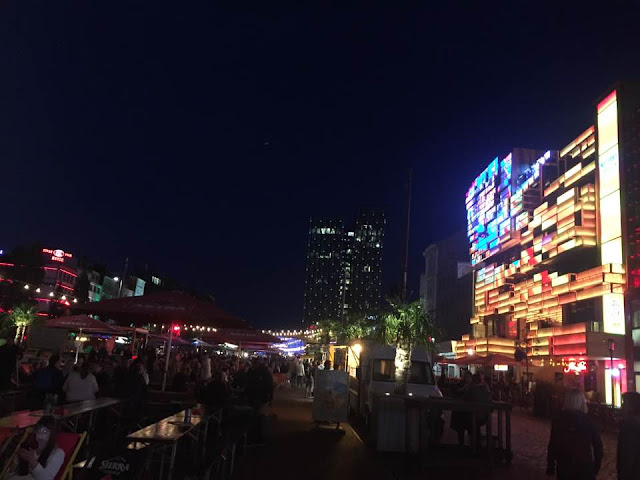 We had a full day of sightseeing on Thursday and Sophie thought it was funny that I found a lock within 15 minutes of walking around.

I knew Hamburg was one of the largest and busiest ports in Europe (the third after Rotterdam and Antwerp) but not that it was the second largest city in Germany.  It’s amazing that it’s such a large container port considering it is nearly 70 miles from the sea.

Sophie explained about ‘stolperstein’.  Artist Gunter Demnig has been commemorating the victims of the German Nazi regime through his project "Stolpersteine” – Stumbling Stones.  All over Germany and many other mainland European countries, he has been laying small memorial stones in pavements outside the houses where the people, who were persecuted and murdered by the Nazi regime, lived or worked .  Set into each stone is a brass plaque engraved with the person's name and dates of birth, deportation and death, if known.  If you get the time I think it’s well worth reading about these and the background to them on the web.

Russian submarine built in 1976 for the cold war and is now open to the public - I wonder how many people initially think this is a german U boat because of the registration. 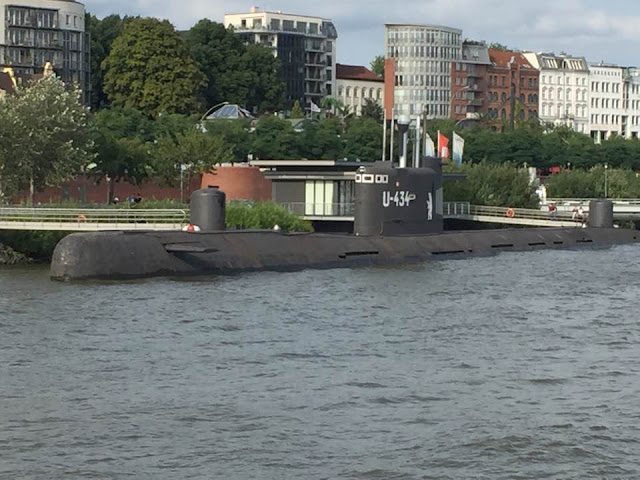 The new opera building reminded me of the ones we visited in Oslo and San Sebastian this year – completely out of place with the rest of the architecture and stuck in a prominent position in the harbour.

There are two long, unusual, escalators in the opera house.  They are unusual as they are arced rather than straight so you cannot see the top until you are nearly there.  Quite a strange sensation.

We visited the town hall and I was fascinated to learn a lot about German politics from Sophe. 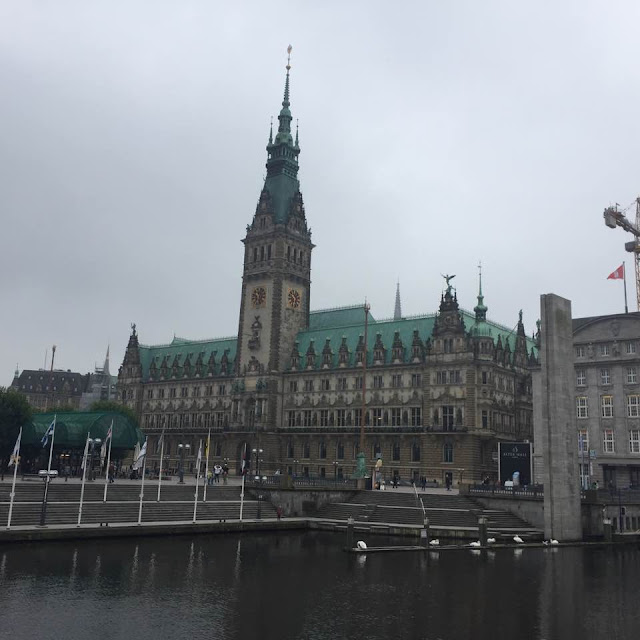 Sophie came back to the airport with me on Friday afternoon and kindly took my bag  because of my back.  She found that she could wear it ike a rucksack:

I got home on Friday evening and Karen picked me up from Banbury station.  I sat next to a German girl, Isabella, on the plane and she was so excited as it was her first trip to England and was staying with an old boyfriend who now lives in Birmingham.  Her English was so good that we could have a good old chat and the two hours soon passed.

Catherine, Karen’s eldest daughter, came to stay with us for a couple days on Friday having now returned from living in San Sebastian for the best part of this year.

On Saturday, it was finally time to leave Cropredy and Mike and Lesley joined us for the three miles and seven locks to Claydon where we will probably stay awhile.  Just before we left, Gill came past on her yogurt pot called ‘Yogurt’.  She stopped off and came in for a chat and a catch up – she is on her way back to Leamington so we will have plenty of chances for a proper catch up over the next few months.

After mooring up we all went back to Cropredy for some drinks and a meal at the Red Lion.  We’ve really enjoyed our stay in Cropredy and look forward to our next trip there and seeing how Mike and Lesly’s house build has progressed.   By the same token it is always good to move on as we make our slow journey to our next major destination, Birmingham, by the middle of November.