After our weekend at Napton-on-the-Hill moored by the Folly Inn we had to get ready for our festive break.  On Sunday 18th we cruised back to Calcutt to leave CHB2 by the reservoir for ten days.
We had rented a house in Hartley Wintney in Hampshire for a family holiday.  We had been to see the family who owned it to have a look around a couple of weeks previously and fell in love with the place.  It felt just like our house in Kent so we knew the children would be happy there too.

We were just about to start cooking dinner on the Sunday evening when we heard a boat cruising past.  It was heading for the locks and it seemed a bit strange to be cruising in pitch black and then attempting locks.  Anyway I looked out and realised it was Mark on his fuel boat pulling alongside us.  I had asked him to drop off some of his coal whilst we were away as the last batch we got from a boatyard wasn’t working well with our stove.  His plan had been to moor overnight at the lock and barrow the coal down to us in the morning but he’d forgotten we were moored on the offside.

Monday was a hectic day as we had several trips across the reservoir to load the car and then drive to Oxford to pick up Matt and Jo.  We had to get all Matt’s belongings in the car too as he was flying back to Oslo after the holiday.

We had a brilliant time away – with children in and out most days and stopping over.  I like to cook on Xmas Day so soon got into the swing of things once I found an apron.

We had 14 for lunch so had a ham and a turkey.  We had ordered the meat from a local butcher and expected the turkey to be boned and rolled but when we got it out of its box we realised they had forgotten to finish the job off.  I wanted it boned and rolled so it could be cooked slowly in the barbecue leaving the ovens free for all the roast trimmings.  We took it back and the butcher sorted it out very quickly but Karen and I had a misunderstanding.  She had driven me down as it was raining but we both thought we would meet at different places – I ended up soaked and rather cold waiting in what she said was the wrong place.  Anyway it all turned out well and everyone enjoyed their lunch.

The days before and after Xmas Day were mostly spent playing games and doing jigsaws with the different children who visited us during the break.  The house was well appointed so we had a raclette one evening followed by chocolate fondue - reminded us all of when we used to go skiing.

We came home on Friday (New Year’s Eve eve) and it felt so good to be back once we were settled in and got the stove going.  We had expected the cut to be frozen over as we had had four days of frosty weather but it must have been a bit milder in the Midlands.

Buddy was also pleased to get back home as it meant he could drink proper canal water rather than boring old tap water again!


Here are a few selfies of our stay in Hartley Wintney with our children. 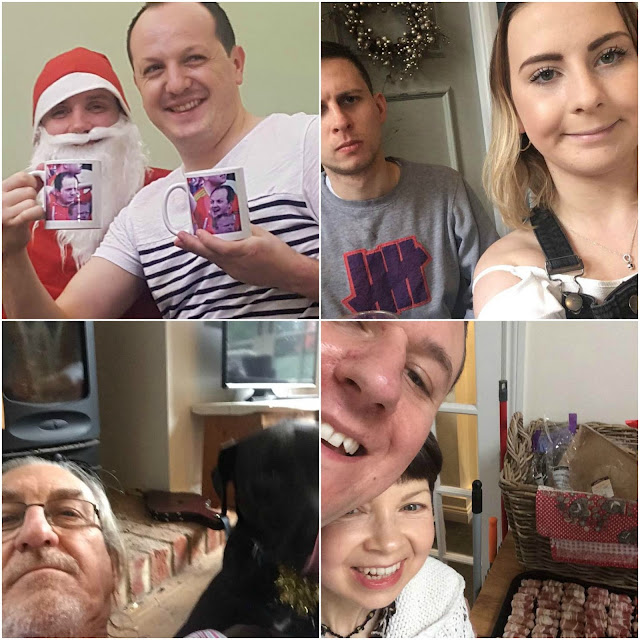 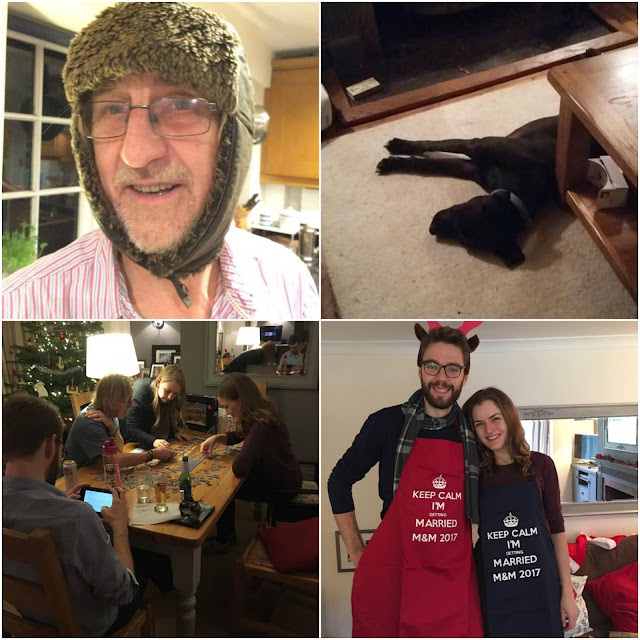 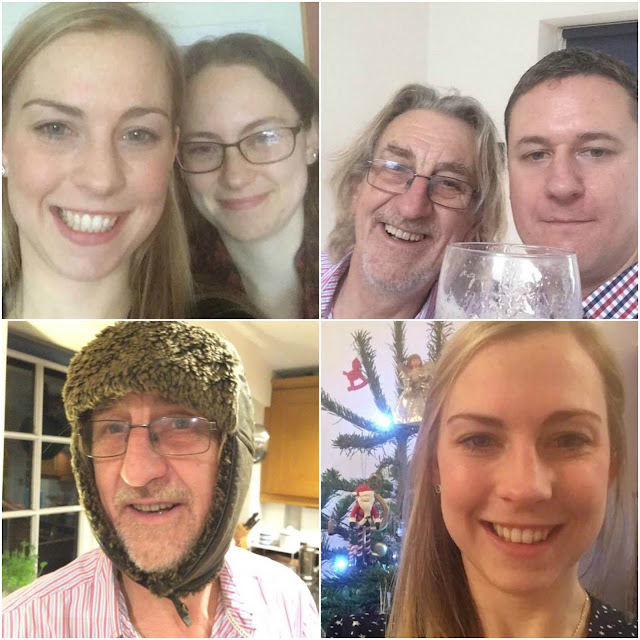 
After our ‘gruelling’ two mile cruise to Napton on Friday we thought we should take it easy on Saturday and stay put.  We had a wander into the village to get our Saturday paper and a few other things at the post office.  It was still mild so we sat outside and had coffee and hot chocolate.

Napton ticks a lot of our ‘resting place’ boxes, e.g. there is no commuter rat run through it but it is a bit too large for our liking.

After lunch we went for a walk up the Napton flight of locks.  It was so still and even the pounds between the locks were still – no sign of water flowing between the locks.  The locks have recently been closed for a couple of months for winter maintenance so that probably accounts for a low flow as the gates will be more watertight.

An exciting time for us – we found a stanking plank store with colour coded planks!  We assume they are used when repairing the locks on the Napton flight – the colours indicating which locks they belong to.

One thing we remember from when we were last here in 2013 was collapsed electricity pylons in the fields near the top lock.  I can’t find any reference to them on the internet but it seems very unusual to just leave them lying there.  Originally I thought they were wind driven water pumps but I’m pretty sure they’re pylons.

We spent the rest of Saturday at home on the boat.

PS: A reader got in touch to add some information about the old brickworks wharf at Napton that was mentioned in Friday’s blog entry.  Sometime after the brickworks closed, a chap called Peter Nichols ran a boat building business from the wharf.  He did this until c2000 and then moved the business to Braunston.  His narrow boats and Dutch barges are well respected amongst the steel boat building industry. (Thanks to Ditchcrawler)

Napton (a gentle cruise to the pub)


We wanted an easy day on Friday so after a leisurely morning indoors we set off for a cruise to Napton.  Karen drove as she hasn’t driven the new boat much and it’s easier to practise manoeuvres in the winter when there aren’t many boats around.  Soon after setting off we arrived at Napton junction where we had to make a sharp right hand turn off the Grand Union onto the South Oxford canal.

We couldn’t believe that it was over three and a half years since we were last on the South Oxford canal.

After a couple of miles we arrived at the moorings by the Folly Inn, our destination for the day.  As it was quiet we decided to turn the boat round before mooring - we wanted to get back to the Grand Union by the end of the weekend.  This was the first time Karen had turned the new boat round and, as there were no onlookers, she did it perfectly.

I took Buddy for a walk whilst Karen got on with wrapping up presents.  Even though it was fairly mild we had some mulled wine when I got back and then went to the Folly for an early evening drink.

We had a pleasant time in the pub and got chatting to a few boaters.  At one point I asked Karen what she missed about the old boat and she replied, "Absolutely nothing".  It made us laugh but in the end had to admit that if we had to chose something it was the fact that as it was bigger we had more storage space and more berths.  It feels a bit callous but we obviously don't miss the old Chalkhill Blue at all.

It is two months since we moved from the old boat onto CHB2 and in that time we have only covered 173 miles and been through 127 locks.  That's half the daily average that we used to do before Karen went back to work - in those days we used to average five miles and four locks a day.

Calcutt (the old brickworks and a trip to Leam)


When Buddy and I walked around Napton on Tuesday this week we visited an old clay pit at the top of the hill.  The clay was dug out and used for making bricks at the, long demolished, Napton brickworks.  I knew I had seen the remnants of the brickworks when cruising on the South Oxford canal a few years ago so on Thursday we went for a walk to see if we could find them again.

Coal was brought in by the canal for the brick kilns and the empty boats were then loaded with bricks for transporting to London and around the Midlands.

We had good views of Napton-on-the-Hill as we walked along the canal as it goes practically ¾ of the way around it.

Remains of medieval strip farming can be seen in the picture above.  Each strip used to be farmed by a different family and as non-reversible ploughs were used the ridges and furrows built up over the centuries.

There are many examples of these old fields in this area and they are protected and cannot be ploughed up, just grazed.

In the evening Karen and I went into Leam to do any remaining present shopping that couldn’t be done on line.  Fortunately most of it involved picked up parcels from shops where Karen had already ordered the goods on-line.  We finished off with a pleasant dinner out.