Tuesday was grey and foggy all day here in the Midlands – a typical November day really.  When the weather is like that I always feel it’s colder than it really is.  What a difference it is this morning though – our first frost of the year and the sun is back out charging the batteries.

Anyway, back to yesterday, the morning was really brightened up as Mike and Aileen came over for what may be their first and only visit to CHB2 for quite a while.  Their final plans are in place and their narrowboat is being shipped to France at the end of the month.  As they know that our current plans involve cruising round the French canals on CHB2 they brought over their latest ‘brochure’ they have been putting together.  It was really useful going through it as so many things are different over there and not just the language!  The only physical difference as far as a boat is concerned is the way the lines are used in locks which means you have to have different means of attaching them to the boat.  Mike and Aileen had had their boat adapted a month or so ago and in retrospect we should have had ours done at the build stage.

We had a great catch up and parted on the promise that the four of us will get together for one last night (no doubt drunken, knowing them!) before they disappear.  It would have been good to meet up on the boats as they are on the same canal as us, the Grand Union, but they are south of Buckby and there is a flight of locks closed for winter maintenance between us for the next few months.

Poor old Mike was demonstrating that the pinch point on their boat was in the same place as ours – between the galley and the dinette.  As he was standing there explaining why this is the narrowest bit and why no one should stand there he knocked a mug off the side and it broke on the floor – rather proving his point.

I didn’t take any pictures yesterday as it was so murky but here is this morning’s view when I got up. 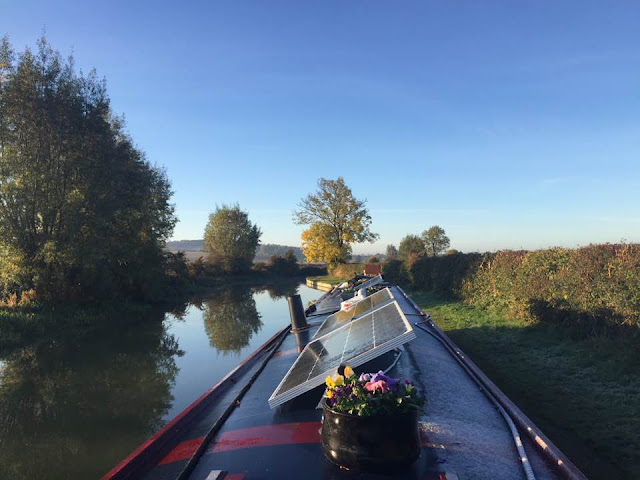 There’s a lady that lives on a boat cruising round this area and I have moored near her several times.  I am convinced she attempts to pass each day without saying a word to anyone.  She really struggles to even say good morning.  We have been moored together this week and she has started taking a circuitous route around our boat to avoid eye contact (by walking in the field the other side of the hedge).  After Mike and Aileen left, the strange lady set off on her boat but only travelled about 100 yards – I assume to get away from me as I kept trying to make her talk - should I be worried?

Apart from learning a lot more about living on a narrowboat in France I was also relieved to learn that our water tank isn’t particularly small. It turns out that Mike and Aileen fill theirs generally twice a week.  Not a problem for them as they are on the move most days.  It doesn’t suit our current style of living as we like to stay put for a week or two at a time.  It seems that we had an extraordinarily large tank on the previous boat and didn’t know how spoilt we were.  It was a hire boat built for 12 people so it had to have a large tank really.

If we want to keep living the same way, having daily showers and washing clothes each week, then it seems we will have to move on every few days to make sure we keep topped up with water.  Anyway it’s such a lovely day today that it’ll be good to have a cruise for an hour or so and maybe do our first double width locks for a few months.
Email ThisBlogThis!Share to TwitterShare to FacebookShare to Pinterest