When I took Buddy out for his morning walk surprisingly few sections of water were frozen over.  As I need to do a couple of loads of washing I thought it would be best to get that done and then fill up with water.  The fact that cold weather is forecast for the next few days also means it’s sensible to fill up with water.  The last thing we want to happen is to be frozen in with no water.  Although we have been frozen in many times of the last few years we never ran out of water but we did use to have a much larger tank on the old boat.

I waited until two or three boats had been through before setting off for Braunston.  I didn’t want to be the one breaking any ice and damaging my protective hull blacking.  Mind you it’s fun breaking the ice, especially hearing the noise it makes.  It should be avoided really as it does damage the blacking and sheets of ice skidding over the surface can slide into moored boats damaging their blacking.

We got water at the same time as another liveaboard couple on their boat New Dawn (boat in front of us in picture above).  Her name was Diane but I’ve forgotten his already – they told me this would be their first winter and they were really excited.  They have been moored behind us at Flecknoe for the last few days and were doing the same as me – two loads of washing and then filling up with water.  They were going to go back to Flecknoe whilst I was going to go a few miles up the North Oxford canal to Barby.

I also knew the people on the two boats opposite us in the picture above – Chris on his boat Kayleigh and his girlfriend (I can never remember her name) on her boat Cheeky Teresa in front of him.  They are both keen naturalists and we got talking about the peregrine falcons that can often be seen perched on Braunston church spire.  As it happened they were there when we were filling up with water and one came down to perch on a telegraph pole quite close to us.  I’ve not see peregrine falcons since we were at Malham Cove in the Yorkshire Dales in August this year.

The girl, whose name a cannot remember, has a dog called Diesel which is quite an unusual name for a dog.  I mention it because our last dog, a black labrador, was called Diesel and it's odd to hear another dog being called with the same name.  Saying that, when we lived in Kent a neighbour also had a black lab called Diesel at the same time as we did.

We all had a good chat about where we ware all going next and our favourite mooring locations round about and then I set off.  As I left Braunston I passed a ram at the water’s edge.

The harness has a colour block underneath – usually red, blue, yellow or black.  It is like a massive crayon and when the ram has done his business (or tupped) a ewe, the ewes back is covered in colour.  The farmer can then see which ewes he can take out of the field and which need to be left behind to be serviced.  These markings are not to be confused with the markings that some farmers put on sheep to identify them on common grazing land like fells.

As I cruised along I noticed that I was accompanied by far more fieldfare than I seem to remember from other years.  Fieldfare overwinter in the UK having flown from places like Norway and Northern Europe and Asia.  Apparently (so I think I recall) they are on the red list which means that their populations have decreased by more than 30% over their last three generations.  Fieldfare are like large thrushes but a bit more fresh looking with greys and creams.  The area we are living in at the moment is quite rural and even though they visit gardens they tend to be seen flocking in fields which means we see them a lot in winter.

On the cruise out of Braunston we passed the site of yet another new marina being built.  As I may have mentioned previously that will make at least eight marinas within a 10 mile radius of Braunston, no wonder it gets busy round here in the summer.

After a few miles I moored up shortly before the mile long Barby straight which goes under the M45 motorway.  We have moored here before and it’s relatively easy for Karen to park by a nearby bridge.


Karen left extra early on Monday as she went to Manchester for the day.  It was a bright and sunny morning so after a few admin jobs I cleaned all the windows on the boat and took Buddy for a walk.

I have to admit that being a house husband on a boat is generally a bit easier to being one in a house.  Saying I cleaned the windows means I cleaned four windows, four portholes and the panes of glass in the doors and cratch - far fewer than if we were living in bricks and mortar.

I’m not artistic at all but I love the colours of the red berries in the winter, especially against the bright blue sky.  You’ll probably think I’ve gone a bit mad as I am putting these pictures up but this blog is all about keeping memories.

We crossed an accommodation bridge and saw an old weight restriction sign from the days of steam driven vehicles like traction engines.  Accommodation bridges were built by the canal companies to allow farmers and their livestock cross the canal when their land had been cut through.

The sign seems in an odd place as the driver would be in the middle of the bridge by the time he got to read the warning sign.  The old warning signs can sometimes still be seen.


During the morning Aileen sent me a couple of pictures of their boat being loaded onto the lorry for its trip to France.  I've included one here as she thought it was really sweet that they used a lorry in colours to match the boat!

We had a quiet Saturday morning pottering around the boat.  Karen finished off the curtains for the saloon and then made matching cushion covers with the left over material. 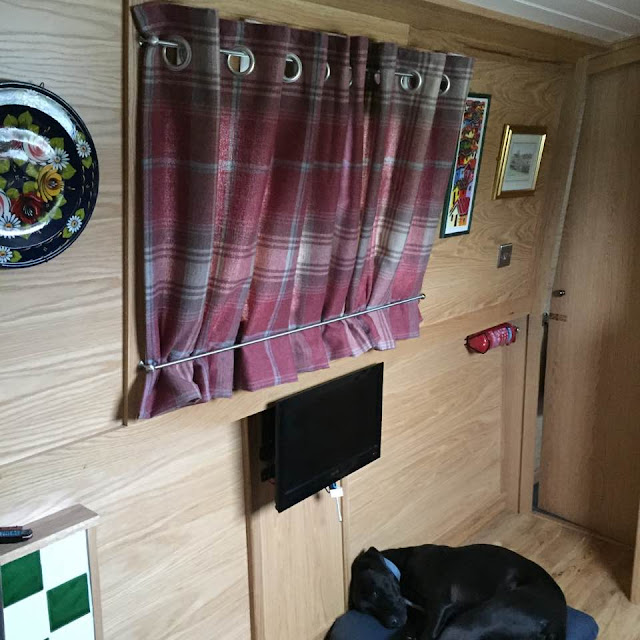 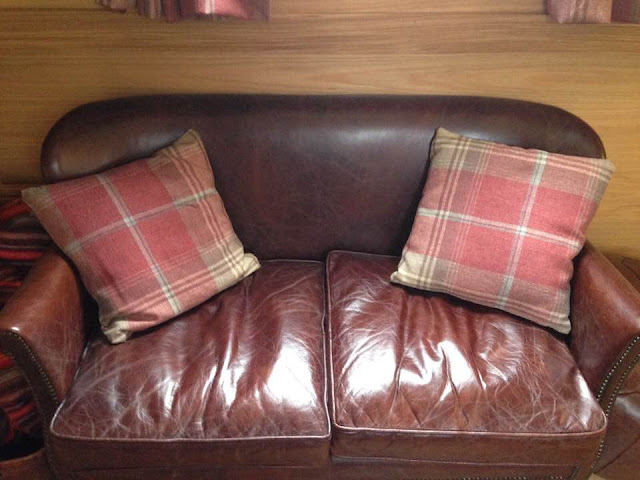 After finishing our jobs we talk a walk into Braunston – only about 2 ½ miles each way. It killed two birds with one stone: Buddy got a good walk and we got our Saturday paper and a visit to the butchers.  We had a lazy afternoon and in the evening Karen made a tasty mushroom risotto.

Sunday dawned grey and we lazed around until after lunch when we went out for a walk and ended up at the Olive Bush in Flecknoe for a quick drink before returning home for a roast dinner in the evening.

On reflection we spoke to no one over the weekend apart from the butcher and the pub landlord.  No boats moored up near us so there were no neighbours to pass the time of day with.  The butcher, as always, was full of information, e.g. he told us he had heard that the Napton flight is now open.  The lock flight has been closed for winter maintenance and has therefore stopped us venturing down towards Oxford via Cropredy and Banbury.  The landlord, also as usual, hardly spoke a word and was his normal surly self.


We had planned to cruise to Braunston on Friday so we could catch a bus to Daventry in the evening to meet up with Mike and Aileen.  Karen and I both really enjoy being moored at Flecknoe and independently came to the decision to stay put and walk into Braunston to get a bus instead.

Karen had some bits of work to catch up on so I took our dinette foam over to Sarah who has a boat yard at Cathiron, north of Rugby.  Sarah is also a seamstress and has made covers for our seating.

When I got back, I made a yellow butter chicken curry for the slow cooker.  Always a sensible thing to do so we have something substantial to eat when getting back from seeing Mike and Aileen.

After lunch we went for a circular walk around Grandborough and Sawbridge.

During our walk Sarah rang to say the seating was finished so when we got back we popped over to pick them up.

Our bus to Daventry was due to leave at 5 and as we were rapidly running out of time we drove to Braunston with a plan to leave the car there overnight.  Braunston is one of those villages where the bus companies have been rationalising.  There used to be six or seven bus stops in the village, but now there is just one.  The other stops haven’t been removed but have signs saying they are not in use.  It took a while to find the right stop as it was dark.  The bus was late and after it was 20 minutes late Aileen texted me saying their bus from Weedon hadn’t turned up yet either.  We gave it another 10 minutes and as it still hadn’t arrived, drove into Daventry.

We arrived at the Early Doors microbrewery just after Mike and Aileen.  It was a great pub – more like a front room with a wooden trestle for serving beer.  Karen doesn’t drink real ale and as they didn't sell lager we decided that she would drive home and so we needn’t worry about buses or taxis.  It was just the sort of place we would go to with my sister, Judith, and Nigel when they visit as they are both into their real ales.

After getting our drinks they presented us with some boaty stuff that would be no use to them in France (their boat is being shipped out there on Monday so they can start a new life on the waterways of Europe).  They gave us some keys that operate the locks on the River Nene and some unused pump out vouchers.  Pride of place was a hardwood hand spike that is used to operate some of the paddle gear on the Calder & Hebble navigations in Yorkshire.  The Driffield canal is the only other waterway in the UK that uses something similar.

It was really sweet of them to pass these items on and we have a great farewell evening.  Well, it’s not really farewell as we will go and visit them in France but need to get Buddy a passport first.

Aileen, who writes their blog, and I couldn’t believe it in the morning that we hadn’t taken any farewell pictures.