After getting the washing done on Thursday morning Buddy and I went to find a local upholsterer whose workshop I had noticed in the marina we visited yesterday.  We had cushions cut for the dinette seating/bedding whilst we were in Middlewich but have yet to permanently cover them.  We have put some temporary material round them to stop them getting damaged but they really need to be covered and fitted properly.

Unfortunately the shop was closed but I found out some interesting information about the canal strike of 1923.

The Gongoozlers’ Rest café is a boat moored just outside the marina but we have yet to visit it although the smell of cooked breakfasts are always inviting especially on wintry days.

During our walk we popped in to see our friend Nicola who lives on her boat in Braunston.  It was nice to have a quick catch up and find out that she works several shifts a week at the Wheatsheaf, one of the four pubs in the village.

At the entrance to the marina is a milepost indicating that this was the original northern end of the Grand Junction canal. 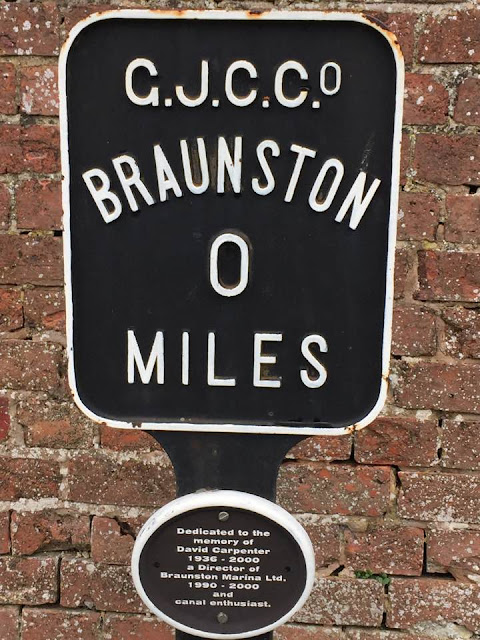 The Grand Junction canal was fully opened in 1805 and ran from Brentford on the River Thames to Braunston.  It was 93 miles long and had 105 locks.  It has mileposts the entire length and we have seen them all but not taken photographs of many of them.  The ones we have taken can be seen here.

The marina was originally a boatbuilders yard and this plaque commemorates two generations of a famous boatbuilding family who owned the yard during that time. 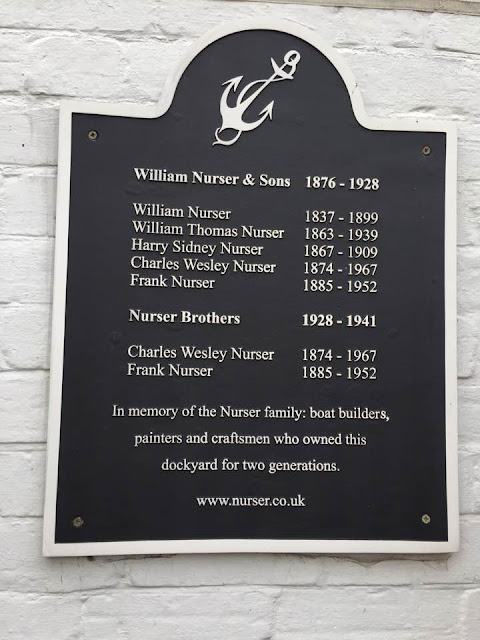 The Grand Junction canal was a very successful canal as it cut the journey length from Birmingham to London by 60 miles; the previous route had been via the Oxford canal which joined the upper reaches of the Thames at Oxford.

In the afternoon we went for a longer walk in the fields around Braunston and it felt surprisingly warm.  I forgot to mention that I had seen a Small White butterfly on the towpath yesterday; it’s always warming to see butterflies on the wing at this time of year.  Friends of mine were really lucky yesterday and saw Clouded Yellows and Common Blues whilst out on a walk in West Sussex.

Having shown pictures of the galley and saloon on previous blog entries here is our bedroom: The bed is a standard double (4' 6" wide) which means the corridor is quite narrow but as the bedroom is at the front of the boat people or wet dirty dogs won't be passing through.  The bed on the previous boat was 4' wide and it's surprising how much bigger the new one feels.

The bed is a standard double (4' 6" wide) which means the corridor is quite narrow but as the bedroom is at the front of the boat people or wet dirty dogs won't be passing through.  The bed on the previous boat was 4' wide and it's surprising how much bigger the new one feels.


The boat builders fitted porcelain knobs, with butterflies on, to the cupboards and wardrobes.  The knobs were a present from my children and I didn’t want to leave them on the old boat so had replaced them with wooden ones before we sold it.