It was raining on Friday morning – the first grey start for what seemed like weeks.  It didn’t last long and the sun started to come out by the time we set off to start moving into Chalkhill Blue 2.

After a while Karen got off so Buddy to have a walk to the yard as it was going to be a strange day for him as well as us.

Just before the boat yard we pass through the massive chemical works owned and run by Tata.  Tata are well known to us as they are one of the largest technology services suppliers in Financial Services.

Poor old Buddy couldn’t really work out what was going on as the old boat was emptied and the new one filled up.  He spent most of the day on the old boat, either sitting on the back deck or wandering around the inside rather forlornly.  To be fair to him, he has never really lived anywhere else since he joined us.

The move took a lot longer than we expected and there was still a lot to do after we called it a day on Friday.  We started again early on Saturday morning and decided that we would go for a cruise on the new boat at three o’clock whether we were finished or not.  By the time three o’clock came we weren’t finished but we packed up and set off to check out and relax on Chalkhill Blue 2.

Even though she is 12 feet shorter it didn’t really feel that much shorter when driving.  We cruised for about three miles checking things out like turning and reversing and moored for the night at Billinge Green flash.

The flash was full of Canada Geese and a few swans and grebes and, as usual, they were making a hell of a racket.  One advantage of the new boat is that we have raised seating in the dinette so we can look out onto the water whilst sitting down; previously we could just see the sky.

The geese had stopped calling by nightfall and most moved on elsewhere during the evening but at about five o’clock on Sunday morning the few remaining started their raucous calls.  It was really good to be back in the countryside listening to the birds rather than trains and traffic.  There was a distribution centre near where we had been moored for the last two weeks or so and lorries were coming and going all night.  It was the empty returning ones that were noisiest as they always hit a big pothole and the noise seemed to echo round the empty trucks.

Sunday has dawned cloudless but we will have to get back to the boat yard to finish moving off the old boat.  Also that is where the car is and Karen needs to head to Leamington for work tomorrow.  Our most importat task today will be to make sure I have a full job list whilst Karen is away this week! 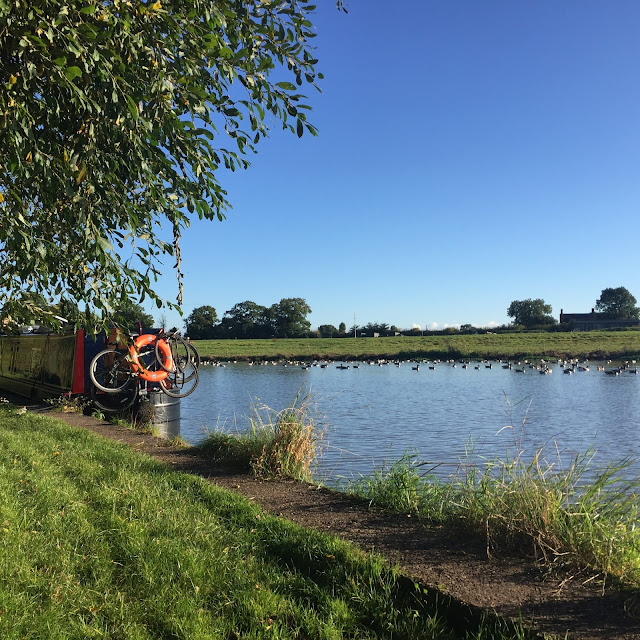