Radford Semele (the cannibals have arrived)

On Wednesday I finally found my first Orange Tip eggs of the year.  I had been getting quite worried as I hadn’t seen any eggs even though I saw the first adult on the wing six weeks ago.

The eggs hatch after about a week so I’ll be looking for the caterpillars soon.  The caterpillars are cannibalistic so each female lays one egg per plant to increase the survival success rate.

It seemed to get pretty cold on Wednesday so I lit the stove before Karen came home from work but by the middle of the night we began to wish I hadn’t as it seemed to warm up outside.

On Thursday morning Buddy and I cruised four miles to a boatyard in Warwick to get a pump out and fill up with water.  We had to go down Radford Bottom lock first and then through Leamington Spa.  Some people have asked how we manage to do locks single handed so I have included the way we do it at the bottom of this blog entry.

After going through the lock we passed Mattie and Sinead on their boat; we have seen them off and on over the last year or so, in different parts of the country, whilst they have been doing their boat up. 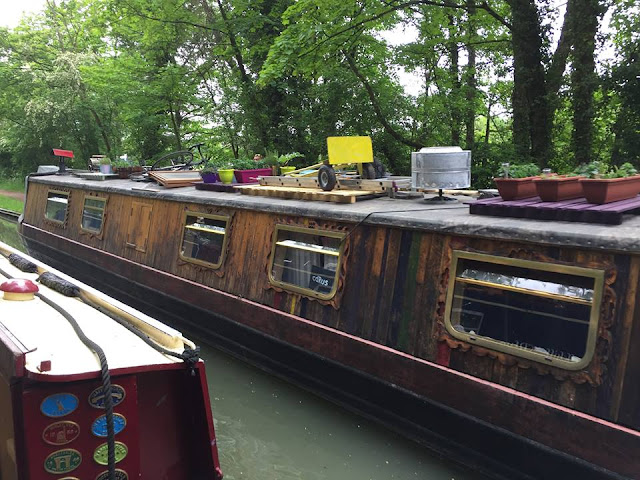 We had a quick chat as I wanted to know how one of their cats was as I saw them when they were taking it to a vet the previous day (it had been run over a couple of days ago).  Unfortunately it has had to be put down but that seemed the best thing when they described the internal issues it had.

This bridge signals the end of the countryside and the start of Leamington.

It’s a shame but the canal isn’t obvious when you are walking around Leamington as most of the way through the town centre it is set in a wooded cutting.

Mind you, you’re never stuck for a supermarket as you cruise through Leamington:

Leaving Leamington we went under bridge 43 which is about 1/2 mile from Karen's office.  Shame, but as expected, she was too busy to take lunch.

As we approached Warwick we crossed the river Avon.

The cruise to Warwick and back seemed to take us forever and it was over six hours before we got back to our mooring spot.

Once we moored up the sun came out so we went for a walk.  I managed to see my first Common Blue of the year – it was a female but I couldn’t get a picture of it.  I did manage to get a picture of a Brown Argus albeit not very close.

Ironically when we got back from our walk I found three Orange Tip eggs on plants right next to where we were moored.  They were green so may well have been laid whilst we were cruising to Warwick and back.

This is how I descend a broad lock on my own - broad locks are wide enough to take two narrowboats side by side.  Other boaters who read this will do some of the things differently but the important thing is that we all do it safely and in our own time and not be rushed by other people.  I also have a dog that can’t be trusted to stay still and not run after other dogs if I’m in the boat in the lock.  Also, different approaches are taken on different canals as the locks can differ between canals.  In fact, I remember that the Kennet and Avon had a multiplicity of different types of locks; this was because it was restored in many sections and at different times.

Radford Semele (a first for Warwickshire)


The walk that Buddy and I take most mornings goes past many hawthorns that are still in blossom.  The hawthorn is the only tree in the UK named after a month; it is often called the May tree as its distinctive white blossom is out during May.  Occasionally the blossom is pink and this is the only pink blossomed tree I have seen this year.

My new fact of the day that I learnt about on Tuesday was that there is a species of hawthorn called the Midland Hawthorn.  Some people complain that hawthorn blossom smells of cat wee and apparently it is the Midland Hawthorn that exudes this fragrance.  This explains why people disagree about the smell of hawthorn blossom as they are probably referring to two different species of tree.

During the day I have been watching a family of Wood mice playing on the towpath just outside the boat.  Although they seemed not to be too timid I couldn’t get close enough to get a clear picture.

Whilst out walking yesterday I came across my first Brown Argus butterfly of the year.  When I reported my sightings for the day I was told that the Brown Argus I saw was the first seen in Warwickshire this year – fame at last!

I also came across this dying Small Tortoiseshell which was upside down and finding it hard to turn the right way up.  I helped it over and it gingerly fluttered onto a nearby bush. It would have overwintered as an adult and laid its eggs on some spring nettles.  They often hibernate in garden sheds or in crevices in tree trunks and you can see that they are well camouflaged for such places.

When Karen comes home from work she parks by Radford Bottom lock and we walk down to meet her.  When we went to meet her yesterday we were a bit early and took the opportunity to investigate a patch of Garlic Mustard growing by the lock.  Orange Tips lay their eggs on this plant and I have yet to find any this year.  I still did not find any eggs but came across an Orange Tip roosting for the night.  Their undersides are wonderfully camouflaged against the flower heads.

Before dinner Karen and I sat in the cratch as the sun was out.  We suddenly heard a commotion and realised there was a dog in the water and it was chasing a moorhen.  Its owners soon appeared and called it and, fortunately, it was obedient, left the moorhen alone and came to the call.

Our friend Ali who has been moored two boats down from us for the last week left during the evening on her way towards Warwick.   We are now on our own on this stretch, well there is a boat behind us but we haven’t seen anyone on board since we arrived so suspect they just come and move it every two weeks like we used to do when we were both working and living in our house in Kent.

Before I finish today’s entry I feel that I just have to share this photograph of Dead Man’s fungus posted online by a National Trust volunteer.  I think it’s a brilliant name and would love to see it in the flesh, so to speak. 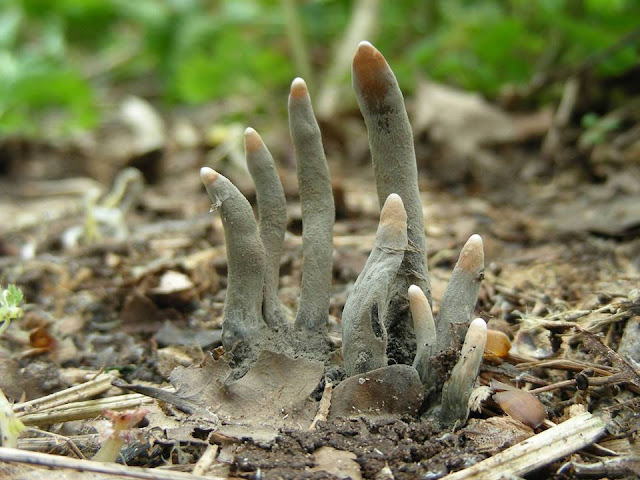 
Buddy and I cycled into Leamington Spa first thing on Monday morning to top up our fruit and veg. store and then took a trip back to Stockton Cuttings.  This is where we moored for a couple of weeks looking for early spring butterflies, usually to no avail.  Yesterday we were lucky and got our first Small Blues of the year; these are the smallest of the UK butterflies and are really tiny compared with others.  I find it amazing that most colonies survive with around 30 adults – that seems a precariously low number.


We also saw several other species, including Green Hairstreak, but were unable to get any pictures.  I am really keen to get a picture of a Green Hairstreak as bright green is such an unusual colour for a British insect.  By the way I was quite pleased with the Small Blue pictures considering they were taken with my phone.  Looking back I cannot beleive that I used to use a good old SLR camera with a macro lens to take butterfy pictures.  It was not unknown to have a whole roll of film developed with not one decent picture in those days, so I must have been really patient to build up the physical pictures in my butterfly photo album.

The meadow next to Stockton Cuttings is starting to blossom.  There are several species of orchid that occur here but none appear to be out yet.

On Monday evening Karen and I attended the last bridge lesson of the academic year at our club in Stratford-upon-Avon.  They had laid on some wine and nibbly bits as a farewell, until the next year starts in October, which was pleasant for a school evening.

When I got up this morning and opened up the hatches it occurred to me that we haven’t had the stove lit for a while and I may have overstocked on coal as we have five bags on the roof still.  Oh well, maybe we’ll have to have baked potatoes once a week during the summer months.

We are going over to the Czech Republic this Saturday, via Poland, to see Karen’s eldest son Matthew for the weekend.  As we are not returning to the boat until Monday I will have to move it this week to avoid overstaying the 14 day limit.  I suspect Buddy and I will move it on Thursday even closer to Leamington.  There is only one more lock before we hit the lowest pound of the Northern Grand Union canal – it starts rising again when it gets to Warwick.