Whenever I hear someone say, “Spring cleaning”, I am reminded of the opening chapter of Wind in the Willows where Mole is spring cleaning his home.  When living on the boat it is relatively easy to keep it clean inside as it is small compared to a house.  The trouble is outside, the windows particularly.  During the winter the windows get filthy from dirty ropes and mud splashed up by passing runners etc.  Also it never seems to be the right weather to clean them properly so they just get a good hosing and wiping down when we fill up with water. As this week promises some fine weather I had ‘clean outside windows’ on my job list.

I haven’t written a blog entry for three days and I must admit that it isn’t because I have been cleaning windows non-stop.  Buddy and I have been exploring the area and meeting fellow boaters as usual but the real reason for lack of blogging is that I forget to take photographs.  Anyway I took a few today so here’s an update.

We have been moored in Clifton upon Dunsmore since last Sunday and will probably move on this coming Saturday.  The towpath here is very muddy but we are moored very close to this bridge which has a handy layby next to it for Karen to leave the car when she comes home from work.  A rather uninspiring modern bridge but with some artwork that seems to discourage graffiti artists.

There seem to be quite a few continuous cruisers moored in this stretch and many are working so park their cars in Karen’s layby. I chatted to the guys who are installing a pipeline opposite our mooring and found out that it is a new water supply for a housing estate at Crick running from Rugby – about six miles in length.

The blue gazebo contains some fancy equipment that seals the lengths of pipes together and every so often the noise volume increases and the pipeline moves along a length – I can’t work out if it is pushed, pulled or both.  I wonder how much of the cost of installation has to be borne by the housing developers.  Our walk yesterday took us past this arm that is now used for permanent moorings.  It used to be part of the original line of the canal before it was straightened by building the embankment straight ahead and running the new canal along it.

It is only a mile into the centre of Hillmorton from where we are moored so I normally take Buddy up to the village for our afternoon walk.  It is one of those villages that has its green running down the middle of its main street.

This morning we walked into Rugby as I need to get supplies from a DIY store.  On the way I saw my first Comma butterfly of the year and Buddy took the opportunity to lay down and play with a stick.

Even though it feels like we are having an early spring we had actually seen more butterflies by this time last year and several species were seen quite a lot earlier.  Maybe spring feels early as the winter has been even milder than last year.  Sitting outside reading a book this afternoon made me realise how close we are to the butterfly season and hopefully we will find some good new locations this year.

Clifton upon Dunsmore (1,500 miles since we moved aboard)


On Saturday morning we took a short cruise to Clifton upon Dunsmore where we will probably stay for a week.  My little brother, Richard, and his family may be coming to stay next weekend and as there are locks about ½ mile further on at Hillmorton and it’s a nice stretch of canal to walk south to Braunston it's ideal for visitors.

We moored by Clifton Double Bridge as there was a good layby for Karen to park the car when going to work during the week.  Opposite us there is a new pipeline being installed but I couldn’t see what it was due to be carrying. 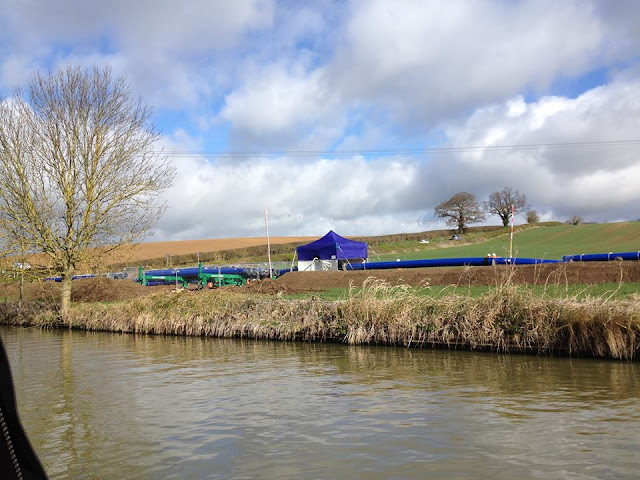 When walking back to Newbold to get the car, the camera fell out of Karen’s pocket and into the canal.  Try as we might we couldn’t retrieve it.  We could only assume it had very little metal in it as our trusty magnet didn’t find it either.  Anyway, that’s the reason there is only one picture on this short blog entry.

With storm Katie due over the rest of the weekend there wasn’t much boat traffic and we spent most of the time catching up with our bridge lessons and walking.  On Monday we went to buy a new camera and get some summer plants for the boat.  After the winds had died down and the clouds cleared, the late afternoon turned out to be glorious.  We took advantage of the weather and potted up some of our pots.   It felt good to have lighter evenings too – nice enough to sit outside.

When entering up our boat log I saw we have now travelled over 1,500 miles since we moved on board at the end of 2014.  Now Karen is back at work the distances travelled are greatly reducing but this gives us more chance to visit the areas we travel through.

Newbold (and the Tump)


I said that you have been spared mention of stanking planks and milestones recently because the North Oxford canal does not appear to have them; however, when Buddy and I went for a walk on Thursday we did come across a dilapidated stanking plank store.

It’s obviously of the modern era due to the type of brickwork but the planks are in rather a sorry state.  It is in Ansty next to a narrow section of canal – the red circles show where the planks would be slotted in across the canal.

Karen was WFB on Thursday and when she finished we went for a walk around Brinklow and came across the very impressive Brinklow Castle.  It is a medieval motte and bailey built to defend the Fosse Way and is known by locals as the Tump (picture at top).

Apart from the size of the earthworks another reason we were impressed by the place was that it has three moats which are nearly all intact still.  This is the innermost moat.

We also really liked the village of Brinklow as it has so many footpaths radiating out and around it.  It reminded me of my younger days when, as kids, my friends and I would spend many hours walking on paths in the countryside.  After popping into one of the four pubs that still survive in the village we followed yet another footpath for two miles back home to the canal.

Friday morning dawned clear and sunny and we were greeted by a curious swan at our bedroom window. 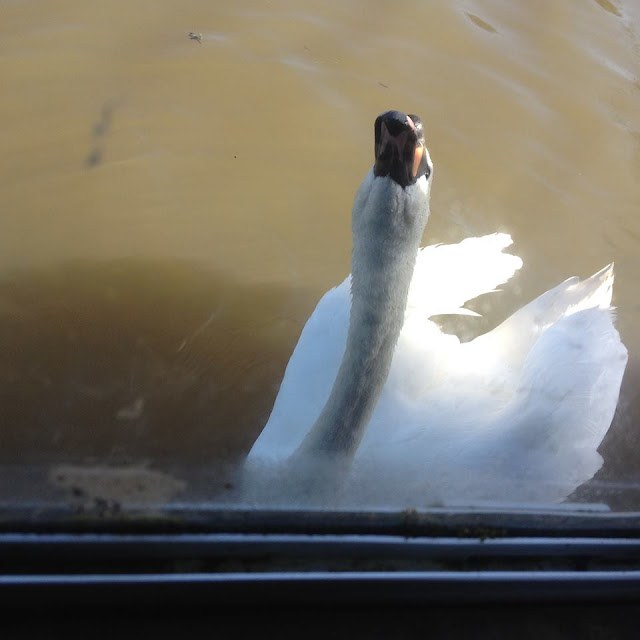 As it was forecast to be the best day of the weekend we decided to have a cruise and find somewhere quiet in the country to stay for the rest of the weekend.

The Oxford canal was completed in the 1770s and it ran for 78 miles between the River Thames at Oxford to Coventry taking in places like Banbury and Rugby.  It passes through the great canal centre of Braunston where it meets up with the Grand Union canal.  The section north of Braunston is known as the North Oxford canal and below Braunston it is the South Oxford canal.  Within a few decades of opening the South Oxford route became underused as the Grand Union (completed in 1805) was wider and took a more direct route from Braunston to London.

The Oxford canal was built as a contour canal and hence has fewer locks than (relatively) more modern, straighter canals.  Because of the vast volume of traffic the North Oxford canal was straightened in the 1820s and the original 38 mile length was cut by 15 miles to 23.  Straightening was achieved by the use of digging cuttings and building embankments.

The South Oxford was left as it was due to the low volumes of traffic (the Grand Union was used in preference once it opened) and is still a very rural and twisty canal.  This old map shows the old and new routes of the North Oxford canal in the area around Brinklow.

All along the canal are signs of the old route, most noticeably, these cast iron bridges.  The old sections were left open as they served as useful arms to local villages, towns, mines etc. 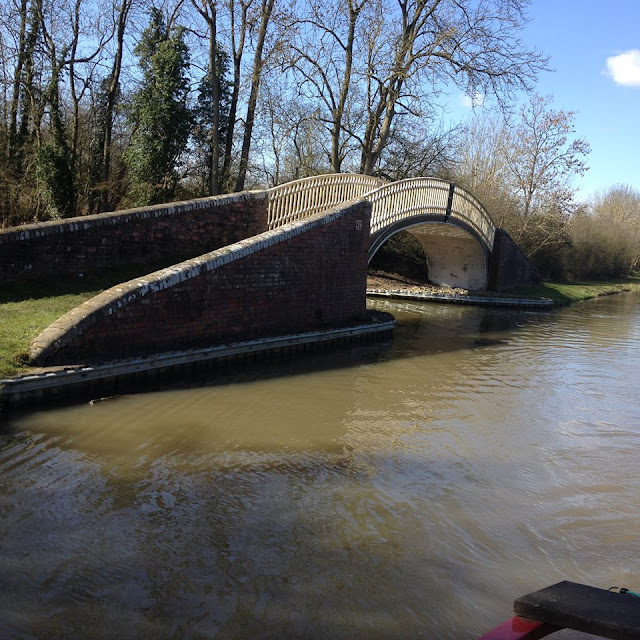 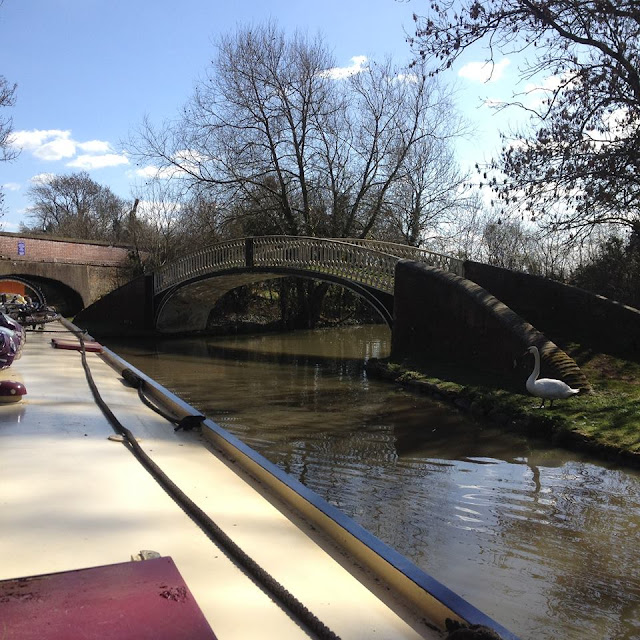 During the cruise we saw three Brimstones - our first of the year and a couple of Small Tortoiseshells.  In the end we stopped for the day between Newbold and Rugby and sat outside enjoying the late evening sun like most of the rest of the country.


It was another murky day on Wednesday so Buddy and I spent most of the day walking on part of the Coventry Way.  The Coventry Way is a 40 mile footpath ring around Coventry, an idea that many towns and cities have adopted over the last 20 years or so.

Not many pictures were taken as it was so grey and they all ended up looking the same but as we set off we passed this scene. 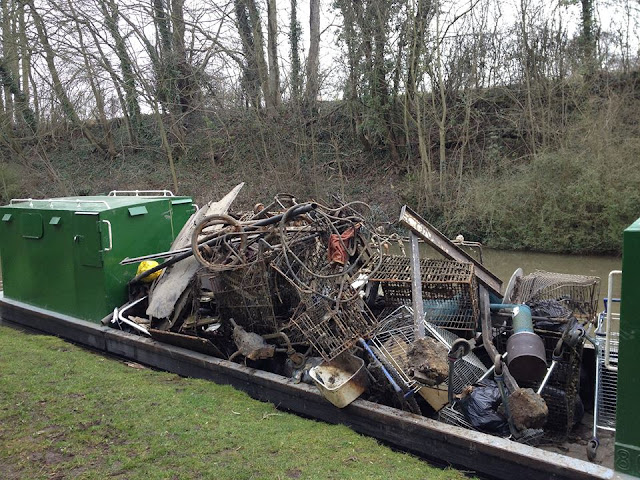 This is the type of boat that is used when canals are being cleared of rubbish.  Such a sorry sight as all the effort to remove the items could be avoided in the first place, let alone thinking about cost of it all.

I was really taken with this twee footbridge across Smite Brook.  It is known as Pedlar’s Bridge and was originally medieval and part of the packhorse route from the village of Upper Smite to Brinklow.  Upper Smite is the deserted medieval village we walked past on Monday. 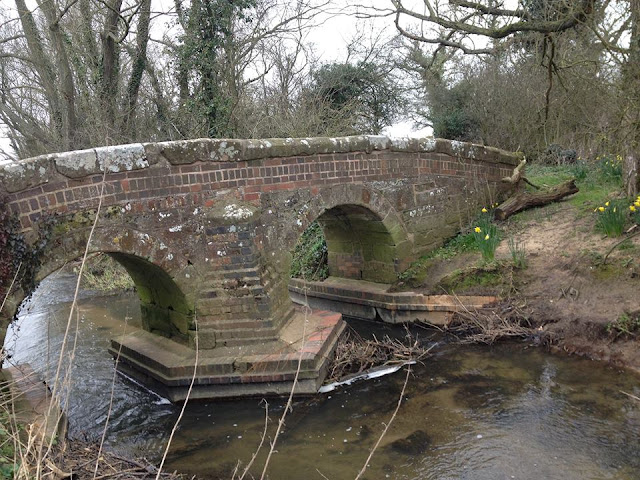 In the evening we wandered into Brinklow to meet Karen on her way home from work and to try out a new country pub.  It was a strange place as it was packed with diners and no real bar area to sit and drink.  On the way we walked along this old green lane - it is part of the route from Upper Smite to Brinklow that we walked earlier in the day. 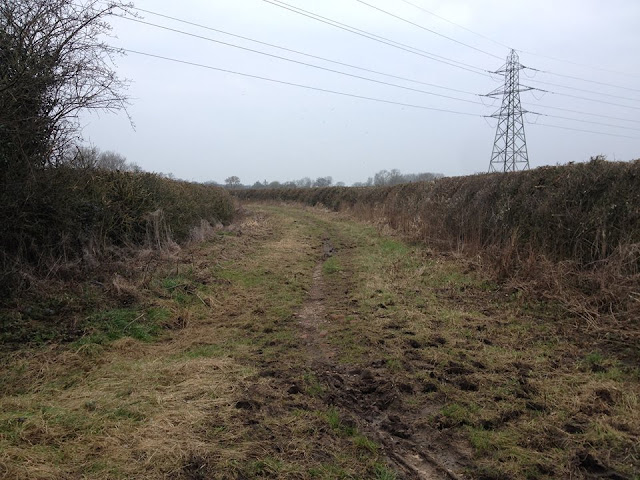 Karen has been back at work for four weeks now and we are looking forward to a relaxing break over the next few days.  We will probably take in a cruise or two depending upon the weather as strong winds are forecast.
No comments: Links to this post
Email ThisBlogThis!Share to TwitterShare to FacebookShare to Pinterest
Newer Posts Older Posts Home
Subscribe to: Posts (Atom)