Welshampton (made it over the border)


The first rain we have had for ages started as we crossed the border into Wales.  Fortunately it was only light drizzle and only lasted half an hour so we didn’t stop.  Here’s Karen walking past the rather nondescript border post. 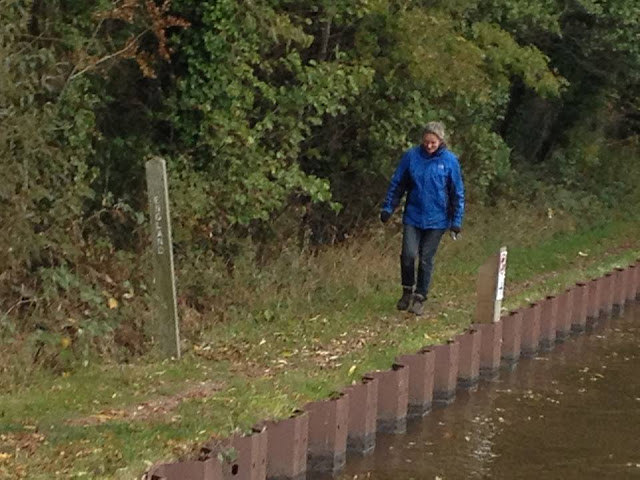 Our overnight mooring on Thursday was at Grindley Brook so when we set off we had to climb up three locks at the bottom of the Grindley Brook flight.  The picture in the middle shows how turbulent the overspill water is which makes it surprisingly difficult to steer a heavy old boat through.  The trick is to keep to the opposite side and at the last minute turn into the current and then the force of the current will bring you back straight and lined up for the lock.  Of the 16 locks on this canal so far I have only misjudged it once – unfortunately there was a pub on the lock but fortunately it was closed so no one saw.

Next we had to negotiate the three lock staircase and there were three volunteer lock keepers on duty so we soon got through.  It also helps that Karen understands these type of locks otherwise I would get us into all sorts of trouble. 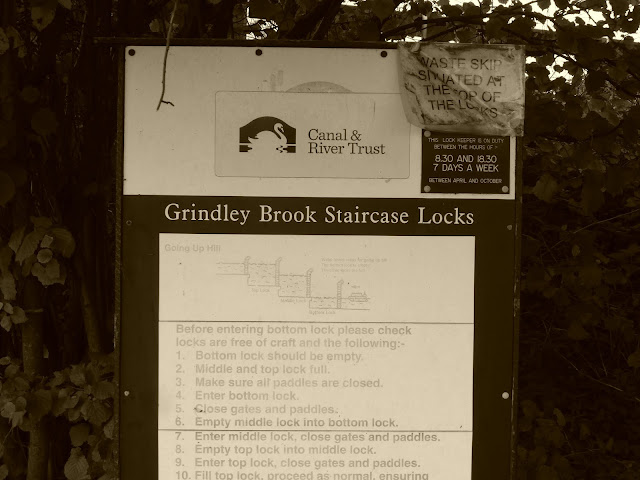 At Whitchurch the local enterprising curry house advertises deliveries to the cut. 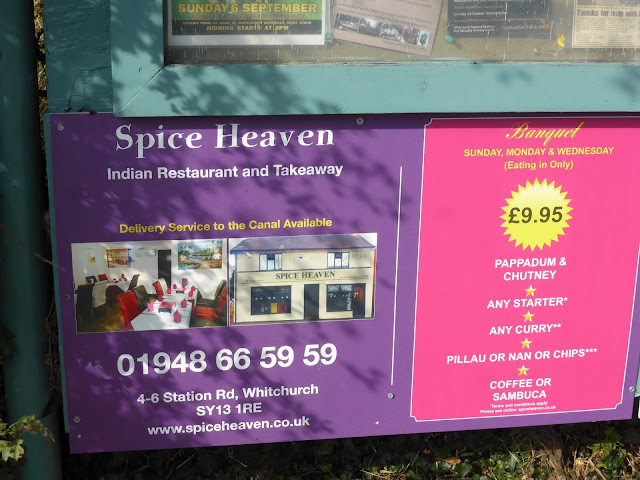 Whitchurch has a little arm on the left here that we will visit on the way back. 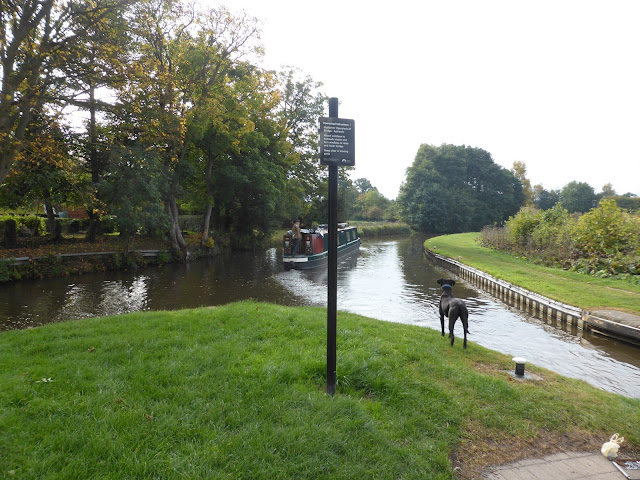 There were four lift bridges that we had to negotiate during the day.  As we were in a convoy of three boats we all took it in turns to open and close the bridges whilst the other boats went through.  One of the bridges had broken and was stuck in the open position.  Apparently the detour for the locals was quite lengthy so hopefully it will be fixed soon. 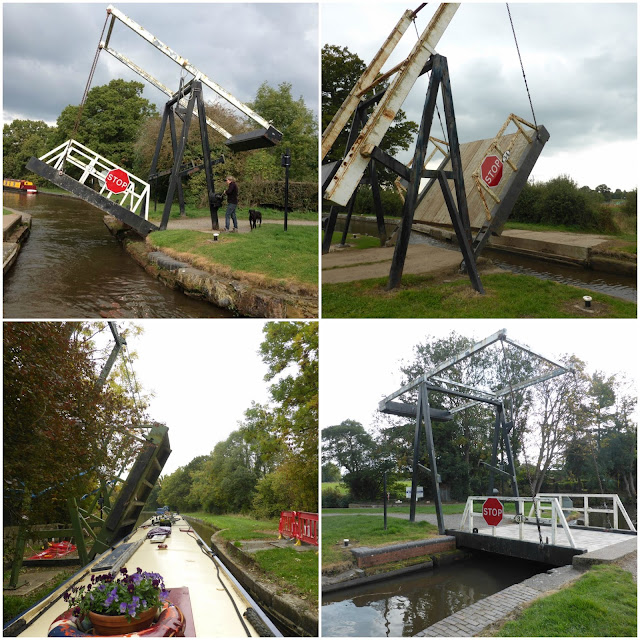 At one point we found a pile of cut oak – mostly old – a dangerous dying bough had recently been cut down.  The best bits are on the roof of our boat now. 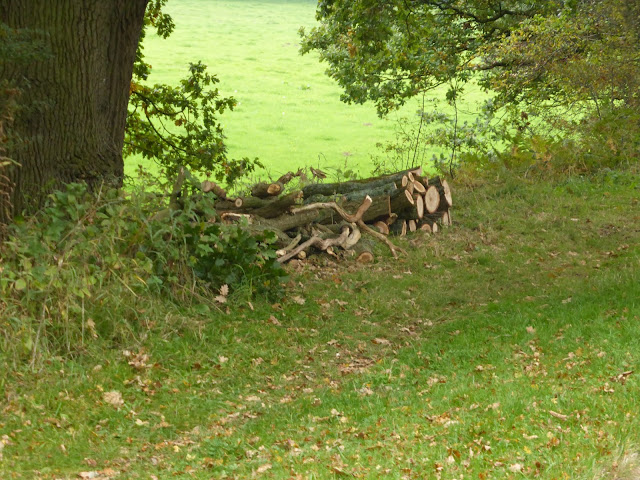 This is the junction for the Prees branch; it is only navigable for a mile now but the old route can be followed on foot so we will investigate when we return down the Lllangollen next week sometime. 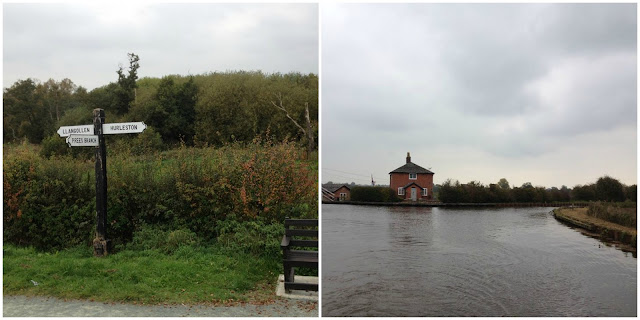 Soon after the Prees branch we went through an area called Whixall Moss which is a haven for wildlife.  There are 2,500 acres of meres and marshy areas that look a bit forbidding to enter but form the third largest bogland in England.  The area is rather cumbrously named "The Fenn’s, Whixall, Bettisfield, Wem & Cadney Moss Complex".  There are many information boards along the towpath bordering the area so the name seems to take up half of each board!

We moored for the night just by this bridge near Welshampton.  The bridge contains the sixth different type of stanking plank store we have come across on the Lllangollen.  Clearly they didn’t’ enforce any sort of standardisation for stanking plank sheds on this canal. 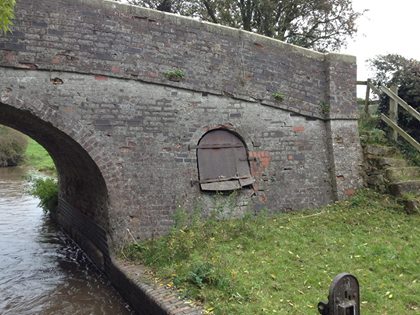 Aileen got in touch during the evening as she and Mike were having a ‘planning session’ – we knew exactly what she meant as it is the sort of thing we do.  They want to explore the Caldon canal and were interested in our experiences and if we had any tips etc.  Although we rank it in one of the top three canals we had to refer to our blog entries for April to fully refresh our memories.  For us it is always nice to relive previous days like this and it makes me realise the huge range of places of interest we have visited over the last year.