The fridge on the bridge

Karen's mum, Ann, kindly gave us a new fridge/freezer for a present so we've been back to the boat for a few days to sort out things like that.  We will then be ready to set off on our travels again on the 5th when Catherine will be dropping us off on her way back to university at Nottingham in the little blue car we call Nigel. 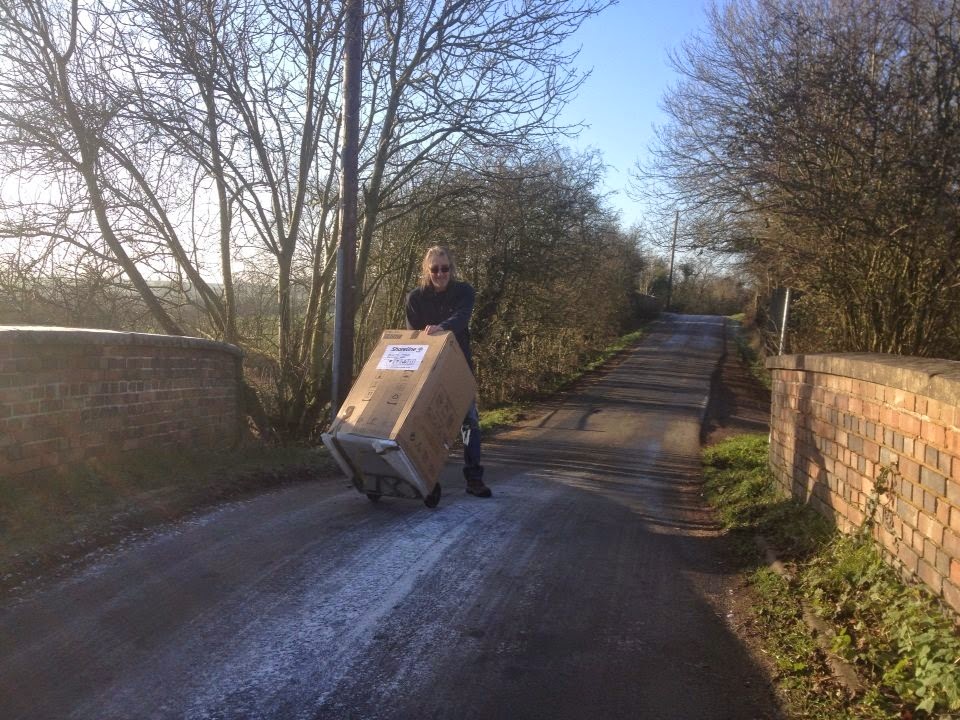 Even though Christmas is over Karen still likes to get the lights on whenever I'm not looking. 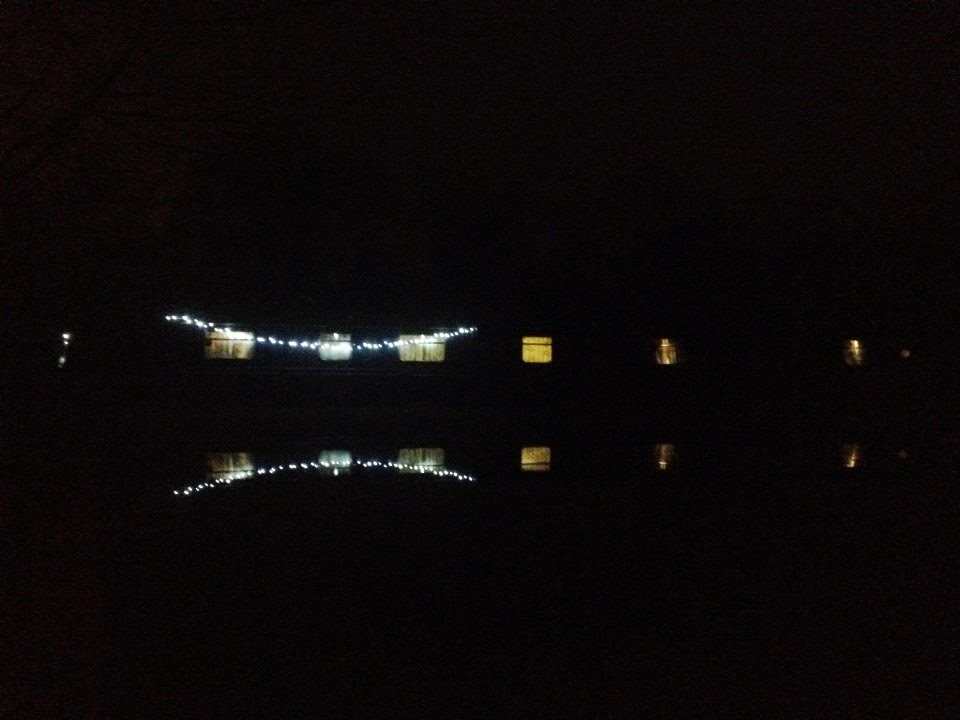 It has been frosty all week and as the canal has been frozen over we have stayed put where we moored before Christmas. 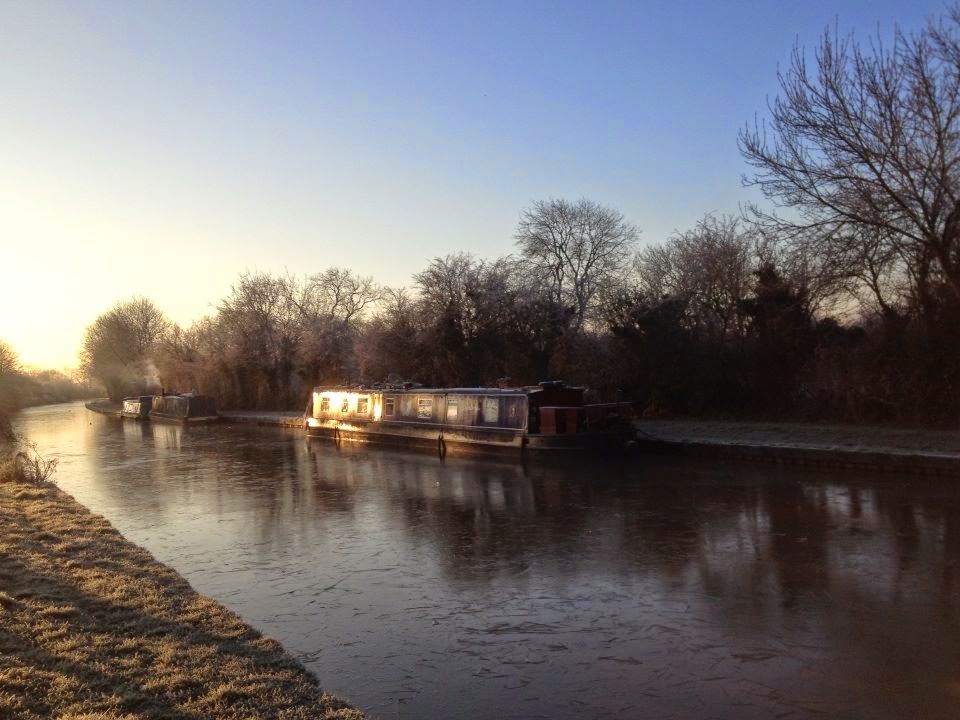 On the first night we had our first taste of snow this winter, albeit slight. 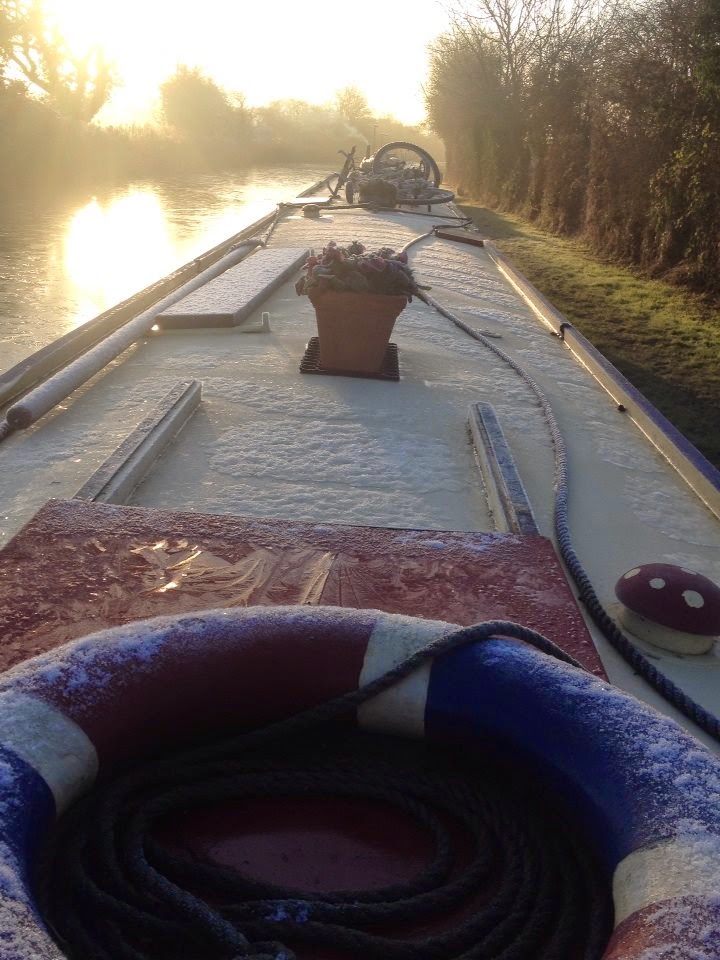 We managed to get some walks in but not long ones as Karen has had a nasty cold.  We found some nice villages including Stoke Golding - where we found a good local pub with prices a bit more realistic than those in the South. 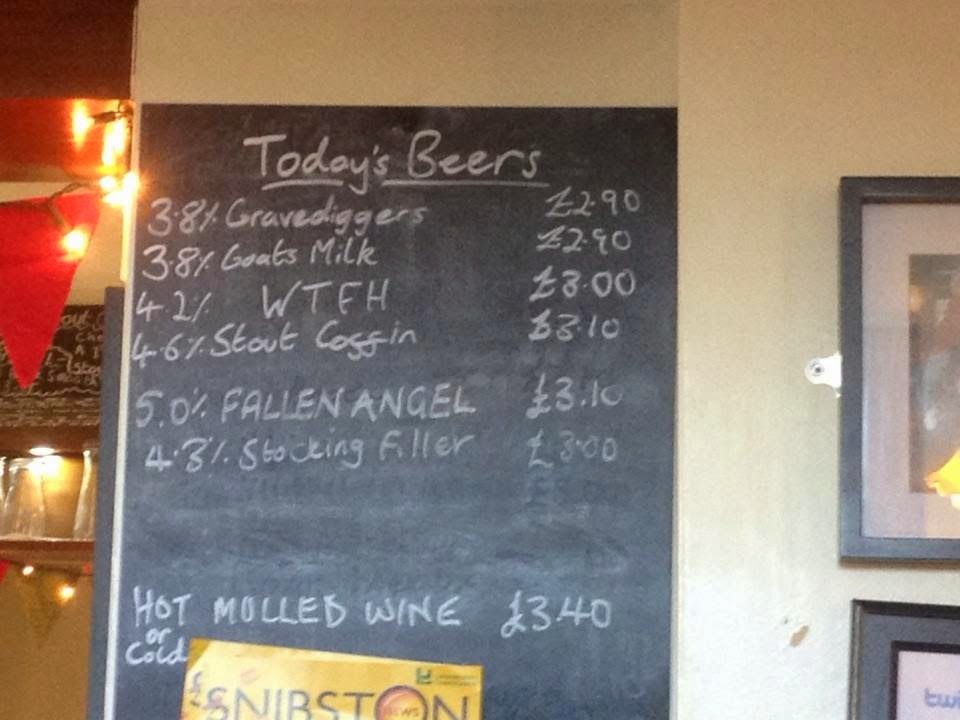 We're looking forward to getting back on the move (and back to blogging) on 5th January.  In the meantime we wish you happy and fulfilling 2015. 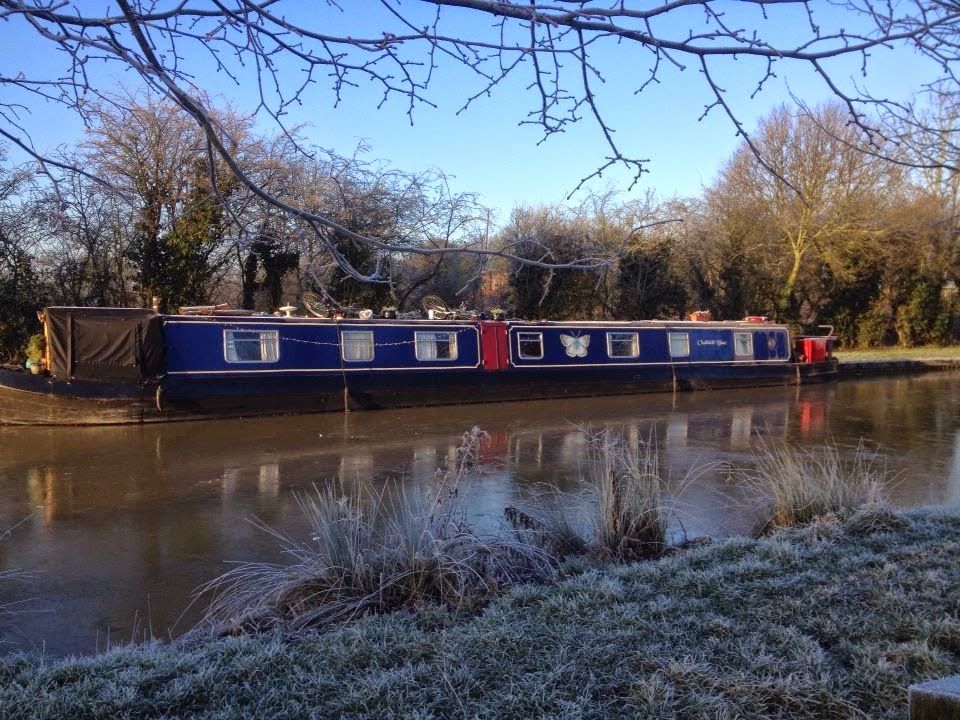 
On Sunday morning we walked four miles to Hinckley.  I was catching a train to Nottingham to meet Catherine and pick up the car she has been looking after for us whilst she studies at Nottingham university.

Karen walked with me to keep me company.  I believe she really came to make sure I got on the train so she could have a day on her own on the boat.

Now it’s Monday and time to pack up.  We’ll be back on Boxing Day. 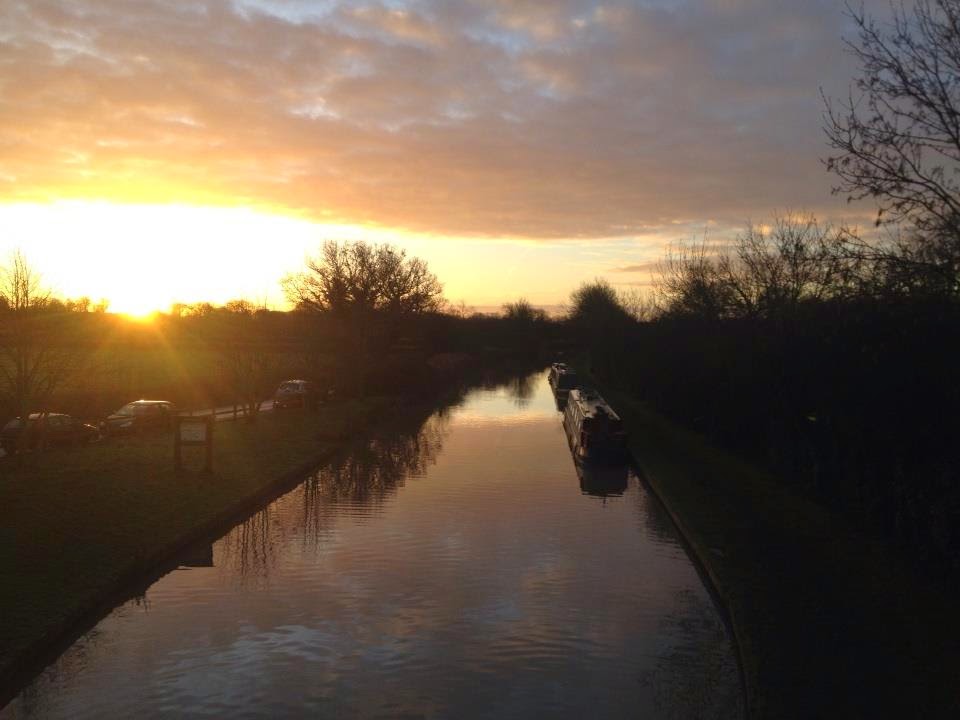 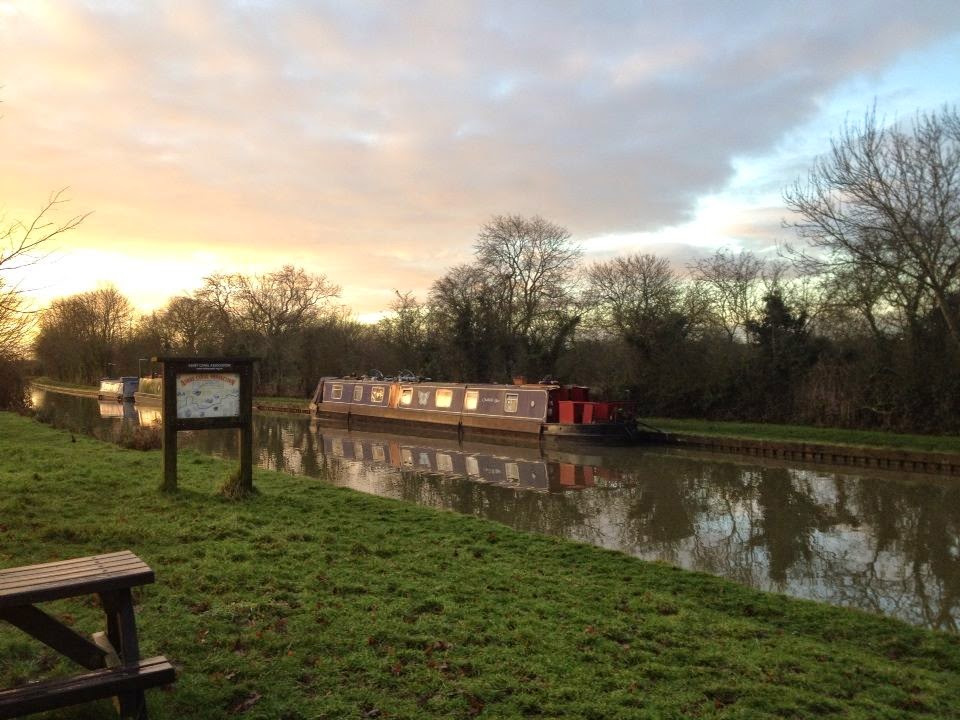 We woke up to an iced over canal on Saturday morning but no ice inside as the stove kept in all night.  Because it freezes over through joining smaller frozen patches it never looks smooth.  In fact it looks deceptively like it’s not really frozen at all. 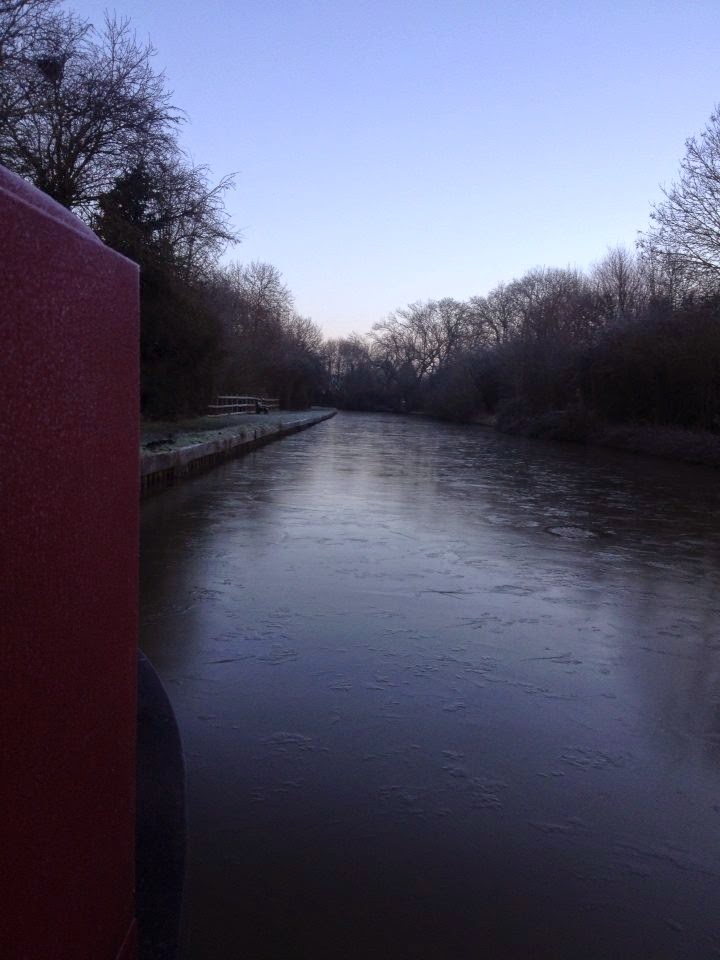 We needed to get to the boatyard at Stoke Golding as they had kindly said if we ordered anything on line then it could be delivered to them.  We would then treat them as a pick up point as we passed.  We waited for a couple of boats to go through first to break the ice and then set off.  It was very cold and the ice was reforming quickly.  Same old song I know but it was yet another beautiful blue sky sunny day. 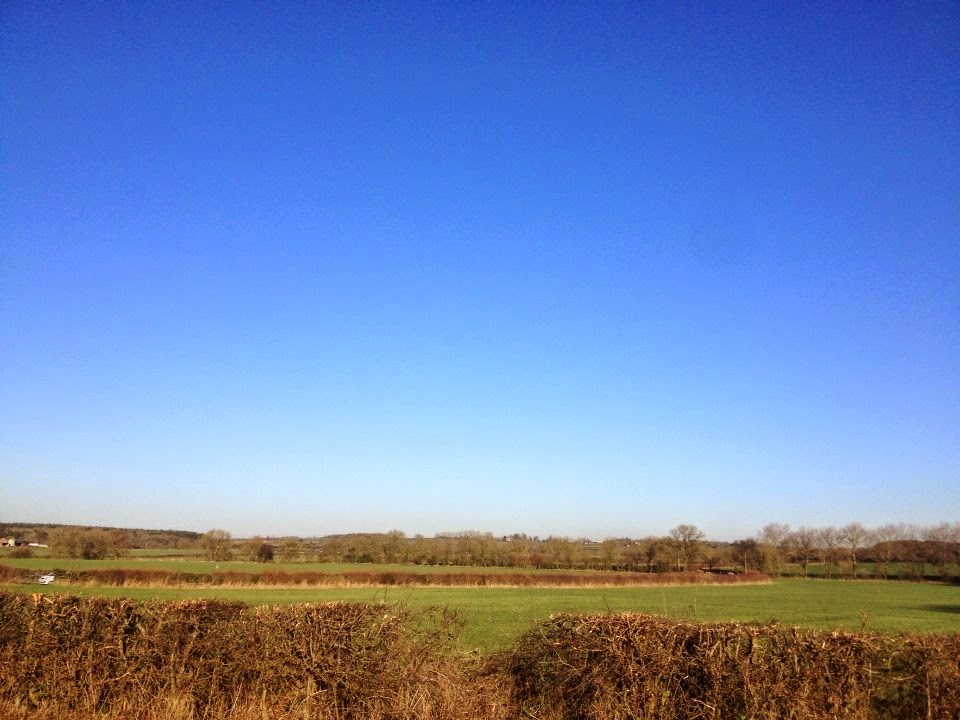 We stopped off at a bridge at Dadlington where there is an honesty box containing eggs.  We had picked up a dozen on the way up and needed to return the empty boxes.  It reminded me of work especially as they were the same price as I used to charge. 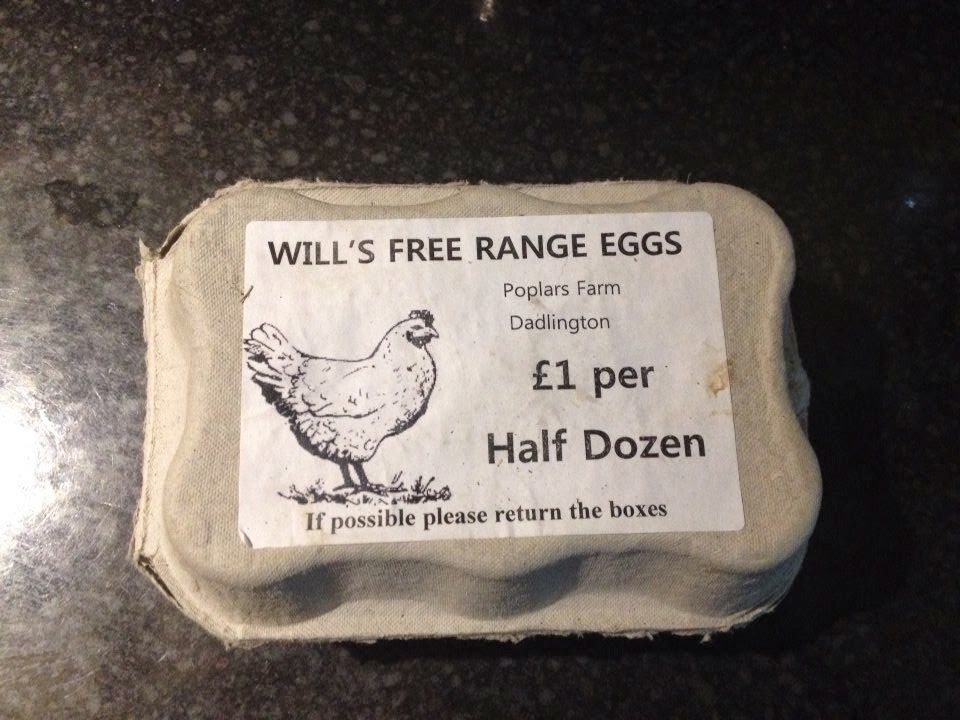 After we stopped at the boatyard to pick up the goods that had been delivered we set off at the back of a line of three boats.  It felt really busy for a change.  The poly tunnel on the left is where boats are repainted all year round.  You will notice Karen's plants back on the roof - they didn't suffer in the wind the other day. 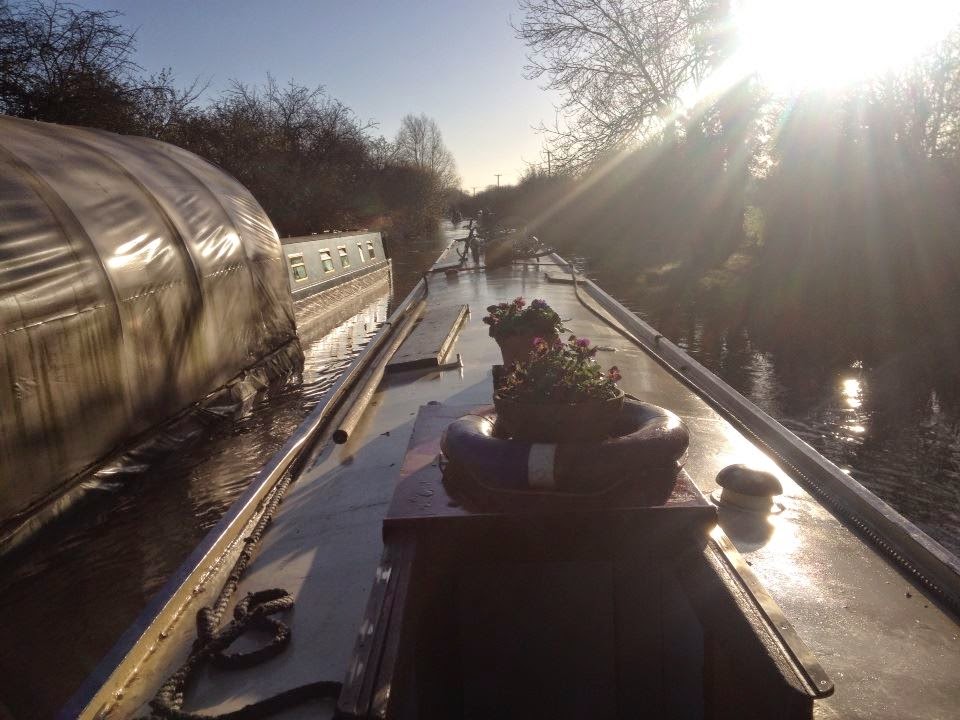 We moored at Higham On The Hill and went for a circular walk and then spent the evening in.  It was the first day this winter that the frost remained all day.